He was an economic and market analyst, Salvador DiStefano who shared on Twitter a picture of a beef cut in a supermarket in the United States and started a discussion about the price of meat in Argentina.

a kilo of meat in the United States $10.563in Argentina you get this x $1400, One kilogram. Meat is expensive in Argentina”, he explained in his personal account.

Significantly, a few days ago a report by Ipcva had indicated that “The prices of various cuts of beef in July 2022 showed stable prices, on average, (-0.0%) compared to the month of June”,

To which another user asked if he was joking: “You are joking, aren’t you? Tell me, how much minimum wage do you need in Argentina to buy the same kilo of meat, and how much is needed in the United States? Also tell me, what percentage of the population in each country earns the minimum wage, and what percentage? Not even that,” says La Nación. 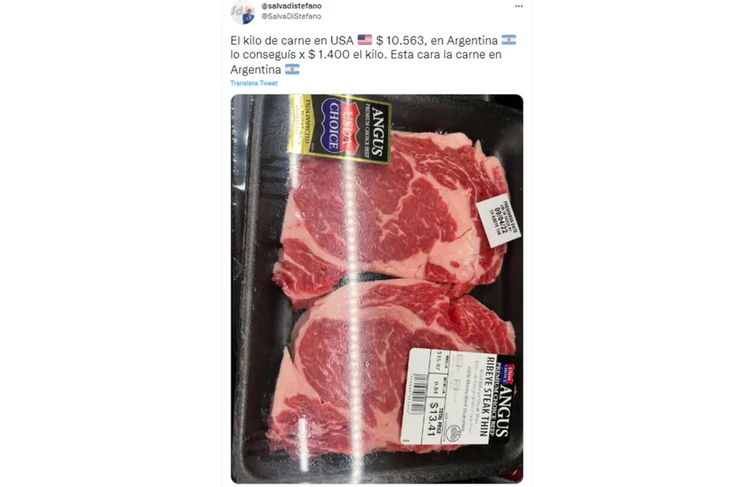 In a clear tone, one follower pointed out: “With an average income in the United States you buy meat for twice the average salary in Argentina. It’s much more expensive if you take that into context. A direct comparison of the price converted to pesos doesn’t make sense”,

While another added: “The minimum wage in many states is $12 an hour (or less). Using 15 and an 8-hour day is US$120, which lets you buy less than 3.5 kilos of this cut-off meat (which is the most expensive); 14 kilos equates to an annual salary of $170, more than three times the national average.,

In this sense, one explained: “Then the problem is that we are poor, not the price of the product.” And another tweeter insisted: “It’s related. Salaries are very low in Argentina, which is why meat is expensive in comparison. Meat would be cheaper for a Yankee coming to Argentina with his dollars. But the average salary there is more than $1,400, whereas here it is no more than $280.”,

“Imagine, if a Yankee comes here, he buys an entire supermarket and comes back with the change. That’s why it doesn’t make sense to compare prices in Argentina with prices in the US” He added.

It’s Only April, But Glow Noodle House Is On Competition For Best New Restaurant Of 2022