He flipped it! Universitario beat Ayacucho 2-1 for League 1 Betsson 2022 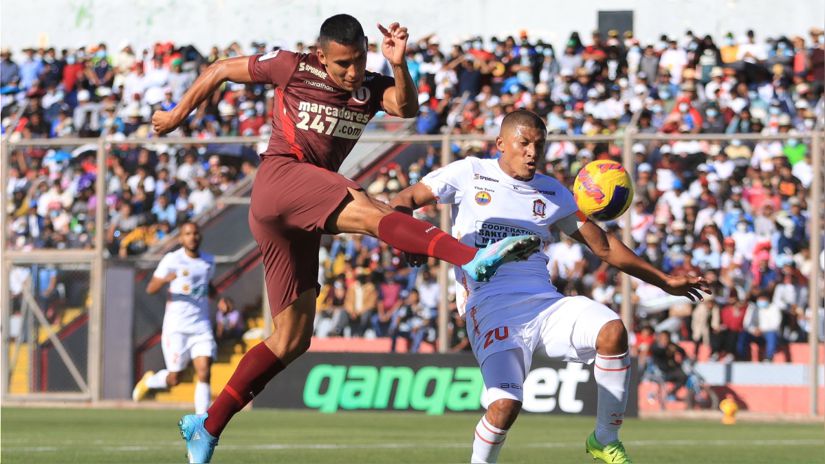 Pure claw! University won 2-1 Ayacucho FC at the Ciudad de Cumaná Stadium on date 9 of the Betsson 1 League Opening Tournament 2022. The cream team came from behind and in the last minutes achieved a triumph that motivates them for the Peruvian soccer classic against Alianza Lima.

Less than five minutes to go University of Sports not only lost 1-0 to Ayacucho FC with a goal by Minzum Quina, who deviated in Quispe, from the 40th minute. The cream team also played with one man less due to the expulsion of Rodrigo Vilca at 69′. We must also add that they showed the red to Larios (on the bench). Against all this, a key action changed the history of the match.

Minute 88, Ángel Cayetano tries to surprise from long distance with a shot from outside the area. the archer of AyacuchoÍtalo Espinoza, half-contains the ball, leaves a rebound and in his eagerness to prevent Hernán Novick from shooting, puts it into his own goal.

minute 90, academic generates a counterattack at the feet of Federico Alonso. The defender gives the ball to Piero Quispe and this one to Andy Polo, who picks up speed, leaving several Ayacucho players on the way, including a ‘huacha’ and when he was in the area, he finishes off with the right foot to the center of the goal of the ‘Foxes’. And, to celebrate. The creams had turned the game around.

With this triumph in height, academic adds 16 points and climbs to fifth place. Next week he faces Alianza Lima and will arrive motivated.

University of Sports vs. Ayacucho FC: lineups confirmed for today by League 1

University vs. Ayacucho FC: schedules in the world

For academic nothing else is useful other than winning. And it is that those led by the technical director Álvaro Gutiérrez no longer have a margin of error if they want to approach the first places of the local championship.

The meringues have the confirmed loss of Alberto Quintero. The Panamanian striker has not been taken into account due to physical discomfort and Joao Villamarín entered the list as his replacement.

In addition, it will be the opportunity in the ‘U’ to see Andy Polo in action, the last reinforcement of the cream squad for this 2022 season of Liga 1 Betsson.

The former forward of the Monarcas Morelia and Portland Timbers of the MLS reconciled with his ex-partner after the accusations against him of domestic abuse. Well, he’s in the call academic versus Ayacucho FC.

Those of Ate are in seventh place with 13 points. César Vallejo has surpassed him by one unit after his 2-0 victory against Sporting Cristal.

On the other hand, there is the store Ayacucho FCa cast that in addition to being part of League 1, plays in the group stage of the Copa Sudamericana.

Last Thursday they fell 3-2 at the hands of Sao Paulo at the National Stadium in Lima. Although he lost, he put in trouble and played equal to equal to the powerful ‘tricolor’.

At the moment, the people from Ayacucha are in the eleventh place in the local contest with 10 points. They go for the victory as a local.

Where to watch Universitario against Ayacucho FC via TV for Liga 1?

You see it on the screen of Gol Peru, channels 14 and 714 HD of Movistar. RPP.pe takes you the goals, best plays and incidents.

Anxiety in times of social conflict

Before the social conflicts that arise in Peru, how can we control anxiety?