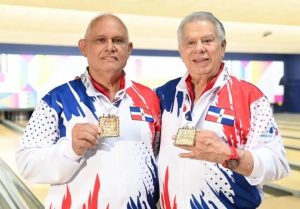 Santo Domingo. – The Dominican couple, made up of Rolando Ceballon and Hilton Nez, won the gold medal in the doubles event of the Legends category of the Pan American Master and Super Masters tournament held at the Ceballon Bowling Center in the city.

Ceballón and Nez held the gold, dropping a total of 4,430 pins for an average of 184.58, silver went to the Puerto Rican pair made up of Fernando Muoz and Antonio Henriquez, who dropped 4,419 pins, and bronze went to Jose Marte and Domingo. Duran (DOM) with 4,104 pins pulled down.

The Dominican team won the gold medal in the men’s masters team event, held in the Baker style. The Dominican quartet dropped a total of 2,481 pins in games played at an average of 206.75, with the silver team going by Canada (204.17) and the bronze by Colombia (192).

Among the women’s Puerto Ricans, the Puerto Rican team made up of Annie Henriquez, Mariangi Colón, Maggie Fumero and Kenya Santos won the gold medal in the women’s masters team competition, which was also held in 12 sports in the baker format, with 2,290 pins. 190.83 on average.

Puerto Rico’s mixed quartet made up of Daisy Santiago, Galen Rosario, Antonio Santa and Luis Rosario won the gold medal in the Baker Super Masters event with an average of 188.67, silver in line with Colombia who knocked at an average of 185.58 and bronze went to Venezuela. awarded an average of 175.17.

Canada dominated the all event Canada’s Donald Hogg and Lynn Guathier won gold medals in the men’s and women’s all event respectively in the Masters category.

Nunez Silver in Legends Veteran Dominican bowler, Hilton Nunez won the silver medal in the Legends All event with an average of 188.92, the product of 4,534 knocked down pins in the 24 games he played.

“As a complex organization, thank goodness we were able to organize despite the inconveniences with the passage of Hurricane Fiona at the beginning, on a sporting level we were also at a good level, although you can always expect more But the most important events, such as singles and team in the 2 Gold Men’s Masters, say a lot about our athletes”, were the words of FEBODOM President Francis Soto about the experience of setting up the event in the country.

The event was held throughout the week at the Ceballen Bowling Center with a remarkable public that packed the facilities every day.