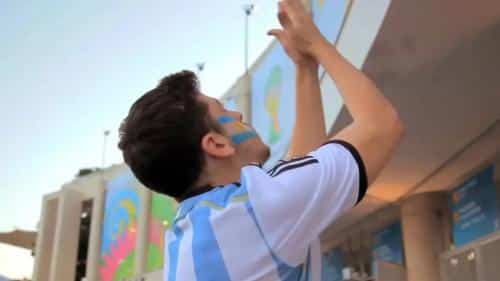 The Argentina national team will continue to fight at the World Cup in Qatar and will face the Netherlands in the quarter-finals on Friday. after the win against Australia A very peculiar fan stood out among the fans: a Hollywood actor who is a loyal follower of the Lionel Scaloni-led team and is shown sporting light blue and white colours.

READ MORE: Hotel accommodation to be free during Argentina national team’s next matches

Chris Mintz-Plasse is American, but Argentine at heart: The actor has encouraged the national team and donned the light blue and white shirt on more than one occasion. The 33-year-old starred in big movies like Super Bad (2007), Uno Uno (2009) or Good Neighbors (2014).

,Argentina, here we come!”, he wrote on his Twitter account alongside a photo in which he was wearing an Argentina shirt ahead of the match against Australia which ended in a 2-1 victory for the team in the round of 16 of the World Cup.

However, this is not the first time the actor has expressed his love for the selection. According to Cadena3, the actor traveled to Brazil in 2014, where the World Cup would be held, to fulfill a work commitment, but at the Funny or Die event he could be seen with an Argentine flag on one of his cheeks and wore a shirt. He was wearing light blue and white when he was cheering for the Argentina team in the stadium.

“Come on guys, it’s time to light up”, the actor wrote on his Twitter account on that occasion and re-released it in recent days, when the Argentine team was about to face Mexico in the group stage.

“Let’s go on with everything. We’ve got to win the next game. We’re aliveHe returned to support the national team on 30 November, when he won a 2–0 match against Poland.

The actor has followed the national team since the 2014 World Cup in Brazil. Source: La Nación.