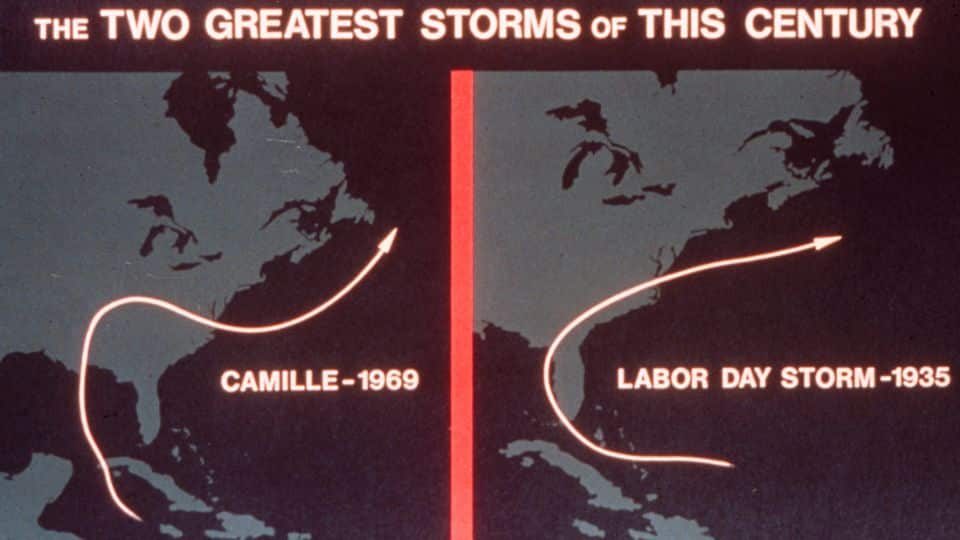 Of the more than 300 hurricanes that hit the United States directly since 1851, only four made landfall as Category 5 cyclones. Powerful Hurricane Ian was not one of them in September 2022.

The Saffir-Simpson Scale divides these events into five categories depending on wind speed, storm surge and expected damage. To be included in the highest category, i.e. 5, a hurricane must reach sustained winds of 252 km/h.

It is rare for a hurricane to hit the United States with this intensity: According to the National Hurricane Center, it has happened just four times in more than 150 years.

Until 1953, hurricanes did not receive specific names. That’s why the Category 5 cyclone that struck the Florida Keys in 1935 is commonly referred to as a ‘Labor Day’ hurricane.

The storm formed on August 29 and had become a Category 5 cyclone by September 2. As it passed through Florida, Georgia and the Carolinas, its intensity decreased until it lost its position range before moving into the Atlantic.

The cyclone claimed 408 lives in Florida, making it one of the 10 deadliest hurricanes in US history.

On August 14, 1969, Camille began to take shape in the west of the Cayman Islands. The next day, as it approached Cuba, it was a Category 3 cyclone. Camille became a Category 5 hurricane on August 16, a status it maintained until the following day, when it made landfall off the Mississippi Coast.

The cyclone, which left 256 people dead in the United States and three in Cuba, lost hurricane status while passing through Tennessee, Kentucky, West Virginia, and Virginia. It entered the Atlantic Ocean on 20 August.

Andrew formed off the coast of Africa on August 16, 1992, and rapidly strengthened to a tropical storm. On August 22, Andrew became a hurricane and a day later it had already reached Category 4.

When it hit Florida on August 24, it was considered a Category 4 cyclone. But in 2002 it was reclassified as a Category 5 hurricane upon landfall.

The cyclone passed through Florida and reappeared in Louisiana, after which it weakened and lost hurricane status. Andrew claimed that 23 live in the United States and three in the Bahamas.

In 2018, Michael made landfall as a Category 5 hurricane near Mexico Beach and Tyndall Air Force Base in Florida.

It was initially classified as Category 4, but further analysis revealed that the winds had exceeded the limits set to place it in the highest category.

Mexico Beach City was devastated by the storm. Of the city’s 1,692 buildings, 1,584 were damaged and 809 were destroyed. The cyclone directly caused the deaths of at least 16 people in Florida, Virginia, North Carolina and Georgia.

Why do hurricanes weaken as they make landfall?

When a cyclone passes over the ocean, it picks up warm, moist air from the ocean. The warmer the air beneath a storm, the more moisture the air can hold, and therefore the more energy is available to strengthen the storm.

“The ocean supplies storms with moisture, and the storm’s heat engine converts the heat hidden in that moisture into strong winds and rain,” Professor Pinaki Chakraborty of the Okinawa Institute of Science and Technology explained in 2020.

But once a storm makes landfall and is no longer over the ocean, the vital energy supply that powers the storm is cut off, leaving the storm weaker on land.

However, climate change is changing the rules.

According to research published in 2020, the time taken for a hurricane to weaken after making landfall has increased by 94% over the past 50 years.

In the late 1960s, a typical storm lost about 75% of its intensity on the first day after landfall. By 2020, only 50% weakening was expected in the first 24 hours after the cyclone made landfall.

This is mainly because human emissions of greenhouse gases have warmed our oceans and atmosphere, and the additional heat means that storms are carrying more moisture than before, giving them their strength even at higher temperatures. Getting extra fuel to sustain. hundreds of kilometers inland. This also explains why they are raining more.