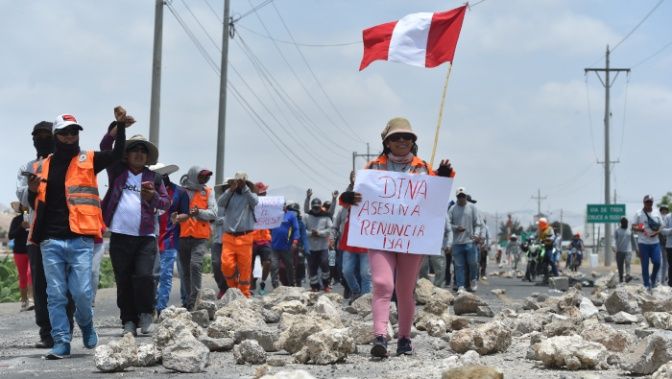 The Peruvian Association for Human Rights (Aprodeh) announced this Friday that it is preparing a complaint against Congress-appointed president Dina Boluaarte for qualified homicide before twenty deaths registered in different regions of the country.

“We are documenting the evidence. We no longer have any doubts that she bears the main responsibility for the events that happened yesterday in Ayacucho,” Gloria Cano, a lawyer for Aprodeh, a non-governmental organization (NGO), told local media.

Boluaarte’s government declared a state of national emergency last Wednesday and since then at least 10 people have lost their lives in clashes with police and armed forces, mostly in the Ayacucho department in the country’s central-south.

With this balance, it rose to nearly 20 deaths due to social protests that began on 7 December, when Congress dismissed President Pedro Castillo, who was sentenced to 18 months of preventive detention during the judicial process against him for alleged insurrection. The order was given.

Cano said that Boluaert could have said that he was not aware of the first deaths in the framework of the protests calling for Castillo’s release and reinstatement, “but he should have warned earlier that the protests in Ayacucho would lead to some sort of action.” Can trigger incidents such as the one we saw yesterday (Thursday).”

The human rights defender said, “The fact of the withdrawal of the armed forces, the fact of not paying attention to the use of firearms, already makes him responsible.”

Boluarte, who had been the country’s vice president, assumed the presidency on 7 December, replacing Castillo, who had been removed by Congress for alleged moral incompetence.

This Friday the network of intellectuals and artists in defense of humanity expressed its disapproval of the dismissal of former President Castillo, which they considered an action carried out by the “Peruvian parliamentary dictatorship”.

In a statement, the NGO expressed that it “rejects the measure of imprisonment and imprisonment adopted by a faction of the Peruvian Congress against President-elect Pedro Castillo.” He also condemned his imprisonment.

Castillo’s removal by Congress was described by the network as another episode in a series of “law” events to politically incapacitate or prevent the election or re-election of a progressive favored politician. A legal decision is implemented by popular suffrage”.

He asserted that “one of the most effective remedies against such measures of legal malpractice is popular protest, sometimes the only way to overpower the will of the majority against attacks by a minority.”

‘Rocksmith+’ to release for PC on September 6