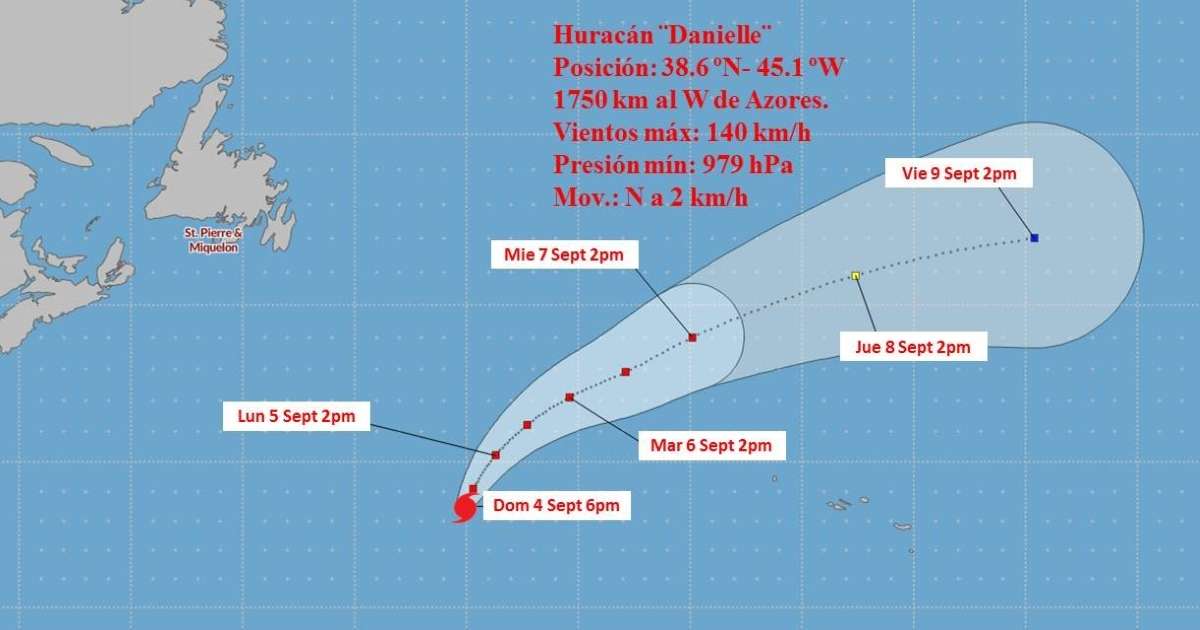 hurricane Danielle and Tormenta Tropical According to the Cuban and United States Forecast Centers, the earl poses no threat to Cuba.

According to the latest tropical cyclone warning for this Sunday from the Cuban Meteorological Institute’s (INSMET) forecast center, Hurricane Daniele is moving slowly over North Atlantic waters at just over two kilometers per hour and is continuing its northward trajectory. changed. ,

The forecast said that “at six in the afternoon, Daniel’s central area was estimated at 38.6 degrees north latitude and 45.1 degrees west longitude, a position that places it about 1,750 kilometers west of the Azores Islands.”

It also states that the event “has strengthened in recent hours and now has maximum sustained winds of 140 kph, with high gusts and its central pressure dropping to 988 ha pascals.”

INSMET has warned that in the next 12 to 24 hours the system will change its trajectory to the northeast over the North Atlantic, which will be able to gain a slightly higher intensity and that the storm will remain of interest for navigation only.

Meteorologists also warned that river levels could rise and landslides could occur, especially in the central interior of Puerto Rico.

This tropical storm is forecast to have maximum sustained winds of 50 mph (85 km/h) and strengthening is possible over the next few days and will become the second storm of the season on Thursday, according to five days forecast.

Earl was 110 miles north of St. Thomas, moving at 5 mph (7 km-h) and expected to pass through the Virgin Islands and north of Puerto Rico before turning away on Sunday Was.

For NHC, Hurricane Danielle will gradually intensify and begin to intensify through Sunday night and over the next several days.

This Thursday, AT Danielle Was Considered a Tropical Storm It continued to increase in intensity and organization during the day, following its formation in the North Atlantic, with maximum winds of about 95 kilometers per hour (km/h).

in the last week, Cuban experts alert to tropical wave and other areas of possible cyclonic development in the Atlantic Ocean and the mid-western Caribbean Sea.

At the time, monitoring was focused on “a broad area of ​​low pressure related to a tropical wave, developing in the mid-western Caribbean Sea, with disorganized areas of rain and lightning storms,” ​​Telegram channel MeteoAlerta indicated.

INSMET experts also noted “a tropical wave with a low pressure area at its heart located in the mid-Atlantic,” which is generating disorganized areas of rain and lightning storms.

The third meteorological event that alerted experts was another tropical wave that should emerge from the west coast of Africa and would also have conditions “for its gradual and gradual development.”

Last Sunday, the NHC warned that, After about three months of inactivity in the zone, The current Atlantic hurricane season may be starting to turn activeWhich started on 1st June and ended on 30th November.

Our newsletter to date has only been financed through advertising and own money, but that limits what we can do. This is why we ask for your help. Your financial contribution will allow us to do more investigative journalism and increase the number of affiliates reporting from the island while maintaining our editorial independence. Any contribution, big or small, will be of great value to our future. For just $5 and with just a minute of your time, you can collaborate with CiberCuba. Thank you.