hurricane ian begins to move off the coasts of Mexico according to National Meteorological Service, Despite them, its impact on the states of the Yucatan Peninsula will continue with heavy rains. Currently (04:00 h), the system is located 345 km east-northeast of Cancun, Quintana Roo, with a displacement trajectory to the north (355°) and an estimated speed of 19 km/h.

Although he would soon cease to represent a threat to the country, ian On the ground in Cuba, Pinar del Río Province, as a Category 3 hurricane (will intensify to Category 4). Later it would go to Florida, United States, where also expected to be affected between Wednesday and Thursday.

On the other hand, the step of cold front no 1 In the Gulf of Mexico and east of the region, it will cause intense intermittent rain in San Luis Potosí, Hidalgo, Puebla and Veracruz, as well as very heavy rain in Tamaulipas, Queretaro and Tabasco. In addition, lower minimum temperatures are expected in the mountainous areas of Chihuahua, Durango, Mexico State, Tlaxcala, Puebla and Hidalgo with possible frost due to cooler air.

Mexico will register Maximum temperature 45º C. until in Baja California, and up to 40 °C in Baja California Sur, Sonora, Sinaloa and Nayarit. In contrast, Chihuahua, Durango and the state of Mexico may have a minimum of -5ºC. 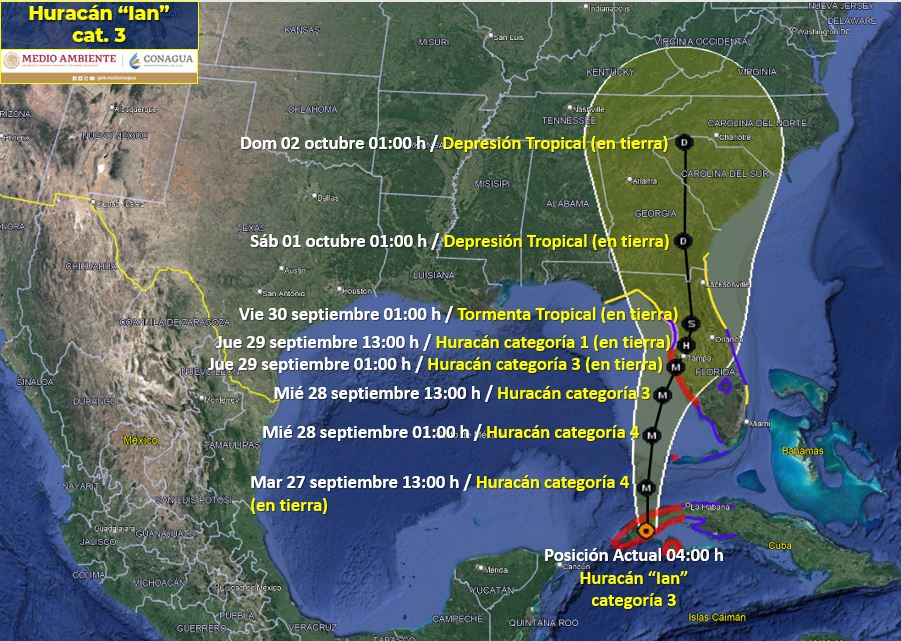 Climate and path of Hurricane Ian in Mexico for September 27, 2022. Photo: Clima Conagua

Valley of Mexico: The morning will be cloudy, with fog margins and scattered drizzle expected. In the afternoon, partly cloudy to cloudy sky, with the possibility of rain and intermittent rain in Mexico City and the state of Mexico at times.

South Pacific: Oaxaca and Chiapas will be partly cloudy with occasional intense rain, as well as very heavy intermittent rain in Guerrero; With all the electric shock and possible hail fall. Morning temperate and cool climate in mountainous areas. In the afternoon, warm climates, as well as the coastal areas of Oaxaca and Chiapas. 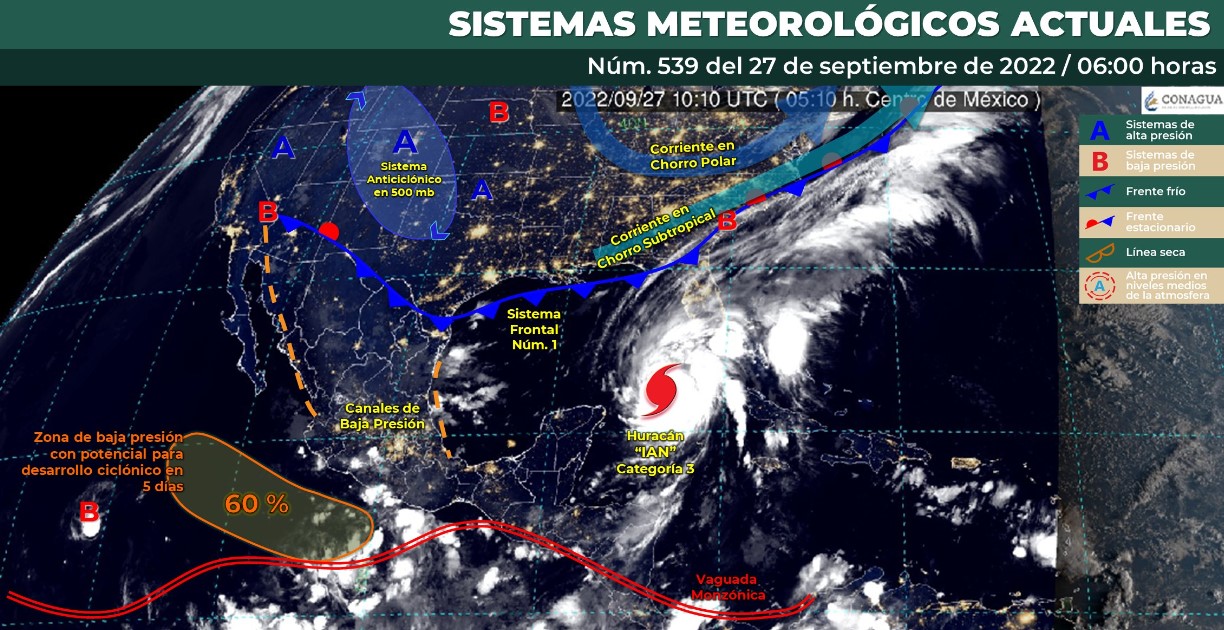 Climate and path of Hurricane Ian in Mexico for September 27, 2022. Photo: Clima Conagua

Gulf of Mexico: During the day it will be cloudy and there will be intense intermittent rain in Veracruz and very heavy rain in Tamaulipas and Tabasco. In the morning, temperate and cool to cold climate with fog banks in higher areas of the region. Hot afternoons and warm climate north of Tamaulipas

Yucatan Peninsula: During the day it will be partly cloudy and the sky will be cloudy, with strong rain accompanied by lightning strikes in Campeche, Yucatán and Quintana Roo. The climate is temperate in the morning and warm in the afternoon.

Answer Table: It will be partly cloudy in the morning and cloudy in the afternoon, with intense periods of rain in San Luis Potosi, rain in Chihuahua, Nuevo León and Durango, with isolated showers in Coahuila, Zacatecas and Aguascalientes. Cool climate in the morning, as well as very cold temperatures in the mountains of Chihuahua and Durango. Warm evening atmosphere in the area.

Mesa Central: The sky will be partly cloudy. Intense rain in Puebla and Hidalgo, very strong in Queretaro, strong in Guanajuato, as well as rain in Morelos and Tlaxcala. cool in a cold morning environment; Cold temperatures below 5 °C and Hidalgo, Tlaxcala and Puebla. Light to warm atmosphere in the afternoon.

Mexico’s government reacts to the leaking of the Ayotzinapa case: “Yes, it was the state”
Thousands march to demand justice for Ayotzinapa’s 43 generalists: “Let all fall”
Goodbye summer time: Commission in Congress backs Rai to disappear