“I know I’ll get sick in the United States, the air conditioning thing is crazy” 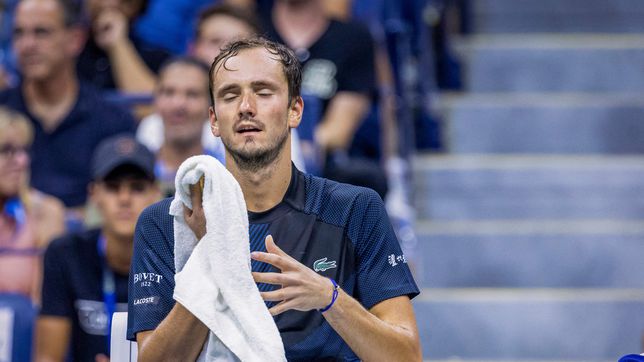 Daniil Medvedev said goodbye this Sunday to his dream of defending the title he won at last year’s US Open and leaving New York as number one after falling in the round of 16 to Nick Kyrgios. Russian tennis players wanted to take stock of the match at the post-match press conference.

Kyrgios Game Keys: “Nick played really well. Even though he was pretty close in the third set, he was a little better than me. I started the third set a little bit physically, and I think that was the key. I didn’t know that How was that, but I was a little more tired. It’s a shame I felt a little sick today. I know in the United States I’ll get sick sometimes because the air-conditioning thing is crazy. Last year it happened to me in Cincinnati. It was cool because you don’t usually get sick twice in two or three weeks. In the living room I can keep warm, but in the locker room I don’t know what degrees Fahrenheit it is , I think it’s 68 or so (20º C). You shower, sweat and then you go out. If you stand for several minutes, with five minutes, you can get sick. I Saw some sore throat and I think physically it played a big part. But that’s no excuse, Nick played great, he beat me in Montreal already and then he He was not sick.

Kyrgios, his biggest rival? “He also played very well in Montreal. He played a very high level game. He has played like he was Djokovic or Nadal, he has played incredible and he has played at his level, in my opinion. He has a different game. , He doesn’t serve everyone, and he can play exchanges too. It’s hard to play against him. He has an incredible serve. He’s played every shot very well. It was a high-level game. If he was in the tournament, If he plays like this till the end, he has a good chance of winning. But he will have to face very tough rivals.

Problems with Kyrgios Box: “The only time I got annoyed with his box was when he was winning 6-5 in the first set and 40-30 on my serve. Before the second serve someone in his box said, ‘Come on, you got it. Liya’. That’s not right. You shouldn’t say anything when you’re in the second box before you serve. I told the chair umpire. I don’t know who it was. The people who are with him seem honest, I don’t know his names, but we talked about it in the dressing room. So I respect him. And at the end of the match I heard ‘Come on, can’t you do that? It was a man’s voice. Only happened once, so I guess it wasn’t on purpose.”

Surprising things during the match: “I was not surprised by what he did during the match, but I wish he missed a little more so that he could win the match. We play classic tennis. He served very well and made good drop shots. When I was close to the line, He didn’t usually look for me. But eventually he started serving and volleying. His level was so high, I wasn’t surprised and so he won.”

Disadvantage of number one: “It’s not beautiful after a match like this and losing at a Grand Slam. I’m not the one in the room crying, but I’m a little disappointed. For a few days I’ll be somewhat sad looking at my phone, my computer, or the chain. It wasn’t my first thought after the match to think, ‘Hey, I’m not going to be number one anymore.’ I don’t know where to start, probably third or fourth. I think Carlos Alcaraz will be with me, I don’t know. But that is the motivation, to try to do better. It’s the last Grand Slam of the year and I haven’t done well. I didn’t win in Australia when I was able to. I couldn’t play at Wimbledon. I lost in the round of 16 here at Roland Garros. If I want to be number one again, I should do better and get more points.”

Features of Kyrgios: “No, today Kyrgios didn’t do any eccentricities. Like I said, we have a lot of respect for each other. Every sport can be different. We’re both very enthusiastic tennis players so in two, three years or the next month in a match We can go crazy and not talk anymore. He’s playing great. Nothing distracted me other than playing tennis.”

Subtraction Transformation: “I wasn’t sure because at first everything was going according to plan, didn’t let him serve and volley. At one point I felt like I was still feeling too close to the line and I turned away so he couldn’t serve and volley, but I could give him more time to come back. I guess if I watched the game, I didn’t return so badly, but I should have served a little better, which isn’t easy sometimes. He had to play better in the baseline, he did well. For the rest, I broke it in the first set. He was 15-30 in the first set. And I broke him twice in the second set. I had no chance in the third set. This usually happens when you play against Nick. In the fourth I had a small chance and I had a break point. I guess for the rest it wasn’t a bad game for me.”