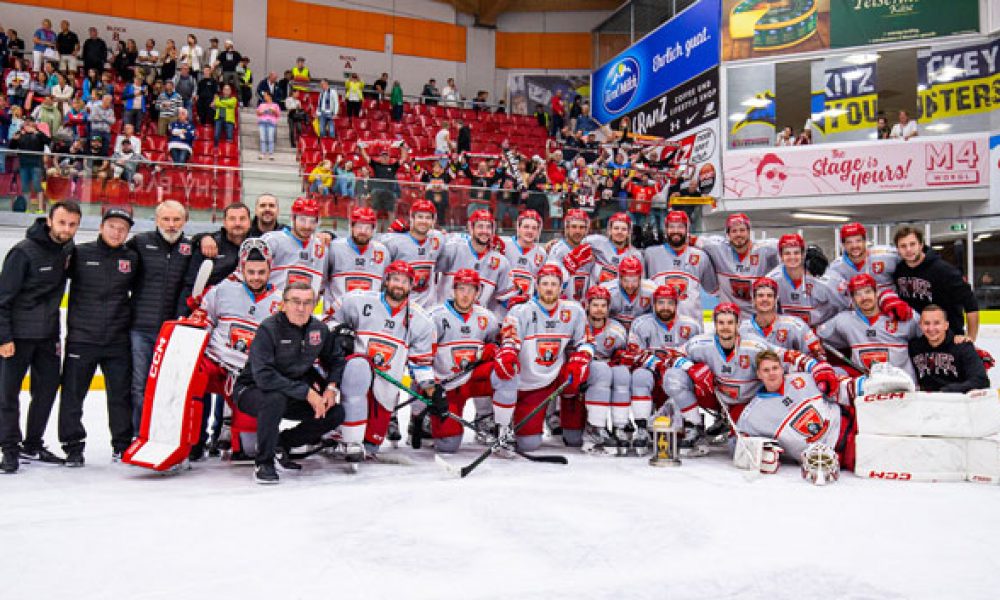 The winner of the 15th Red Bull Salute Tournament is called Mountfield HK. The Czechs defeated EC Red Bull Salzburg 2–0 in a thrilling final, with the second goal going blank. At the sold-out Sportpark Kitzbühel, both teams put up a strong performance in a well-deserved and tough contest, both worthy of victory.

Both teams entered the game without much scrutiny and immediately set a high tempo. Alternatively, the first chances were soon created, mostly from the crowd in front of the goal. In the 10th minute, Thomas Raffle started a short single, but could only finish with a backhand. The Salzburg captain suddenly had the next big chance in the 18th minute, standing free in the slot, but he could not get past the fine Czech goalkeeper Jan Ruzica. In the extremely intense final leg of the first period, Red Bull (without the injured Dominic Heinrich and Troy Bourke and the privately held Tyler Lewington) were under pressure, but this was not enough to score the first goal.

The intensity was maintained after the break, it was up and down, and relentless duets over and over again. The Czech scored his first goal in the 29th minute, when Nikita Sserbach came down from the left bank to beat Salzburg’s strong goalkeeper David Kickert. This only accelerated the attacking efforts of Red Bull, who later took the initiative and only missed the equalizer several times. Only from the 34th minute did the Czechs re-open the game, the doubles going hard and turning into sometimes violent fistfights. After a highly emotional final stage and a really good but unsuccessful Salzburg power play, the Czechs took a 1–0 lead in the dressing room after two thirds.

And they came out again with momentum in their favor, with David Kickert having his hands full in the first minute of the final third. Red Bull then swung back into aggressive action, but continued to occupy more of its territory. Mountfield constantly played the attacking mode and cleverly grabbed the disc. However, in the 53rd minute, Red Bull suddenly had a good chance to equalize after a counterattack with two rebounds, and Mountfield was lucky to block the goal. In the 55th minute, Red Bull was out again and created some dangerous moments. There was a lot of movement ahead of the goal, but Disick didn’t want to go in. The Czechs set the final point with an empty net goal shortly before the final siren and thus won the tournament. Red Bull finished the tournament in second place but made a very strong impact in the tournament overall.

Salzburg head coach Matt McIlvain:
“It was really tight. We were the better team for two thirds. But their goalkeeper today was excellent and in the last third they were clearly in charge. But when you look at the quality of our opponents today – Mountfield is a top European team – I was still impressed by our fighting spirit. We played a good game.”