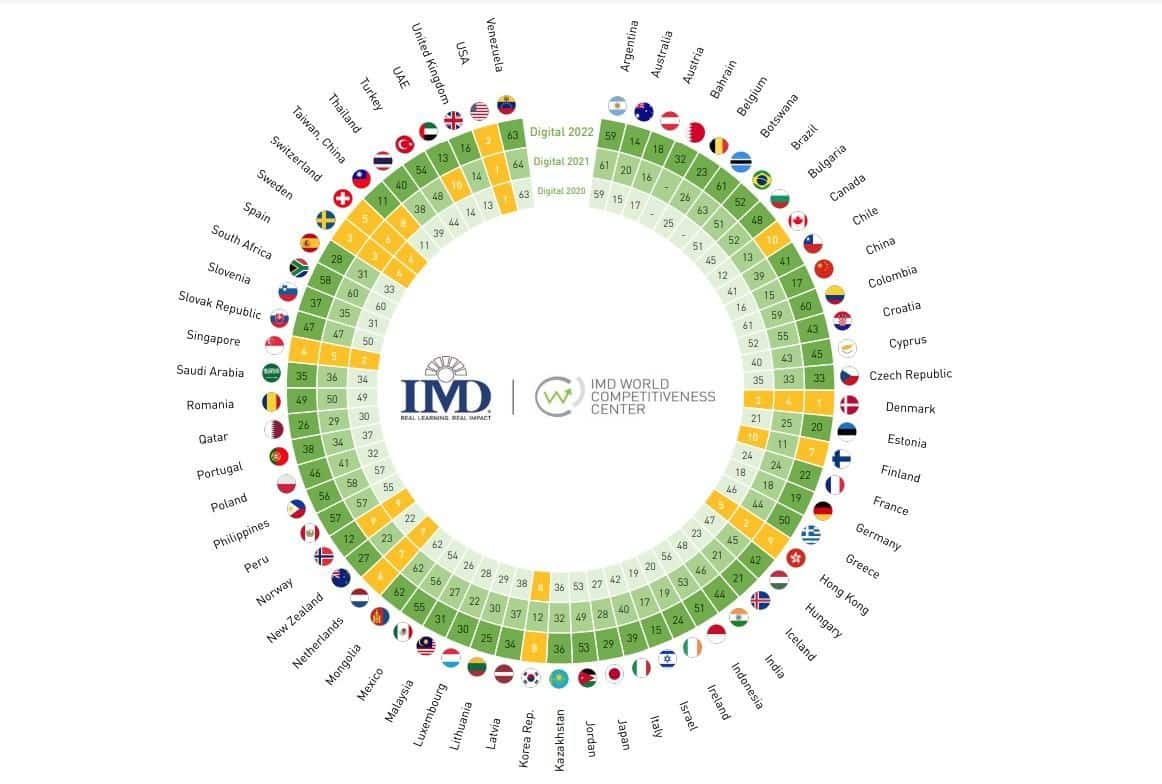 In the case of Spain, our country has regained its pre-pandemic position in the digital competitiveness rankings prepared by the IMD every year, ranking 28th in this 2022 edition (repeats 2029 position). This shows an improvement of three terms as compared to 2021. Spain fell to 33rd place in 2020.

One of the key findings of this 2022 edition of the IMD World Digital Competitiveness Ranking, published by the IMD World Competitiveness Center (WCC), is that governments and the private sector must protect their digital infrastructure from cyberattacks if they are to continue in the race. For digitally competitive economies.

All things being equal, economies that want to develop a strong roadmap for digitization must invest equal amounts in talent, training and education, scientific concentration and R&D.

“This ranking describes the importance of national factors in explaining the digital transformation of companies and the adoption of digital practices by citizens. Digital nations are the result of a combination of digital talent, digital regulation, data governance, digital approach and capital availability”, says WCC Director Arturo Bris.

A total of 63 global economies were studied in terms of their ability to adopt and explore new digital technologies. This year, 54 criteria were measured, a combination of external hard data and IMD’s Executive Opinion Survey, and conducted into three main groups: future preparedness, knowledge and technology.

Addressing cyber security will boost the adoption of e-participatory resources

Correlations in the data prove that the security of digital systems and the transparency of digital actors, especially in terms of data usage, are essential for technology to spread throughout society; A prime example is e-government.

“Government cyber security capability” and “privacy protection by law” are two new criteria in the WCC dataset. Both were supplied by the Digital Society Project.

The WCC said it wanted to include them because “globalisation, advances in digital technologies and the global pandemic have combined to intertwine economies and move more parts of our business and personal interactions online, leading to cyber attacks.” Attacks are on the rise. Cyber ​​security capabilities have become paramount, both at the enterprise and government levels.”

Denmark’s victory is in large part due to its excellent performance in future preparation: defined by the WCC as “the country’s readiness level to take advantage of digital transformation”. He is a strong performer in business agility (1/63) and IT integration (1/63), ranking fifth in his adaptive approach.

Denmark is one of the world’s leading economies in digital talent, training and education. And yet, executive perception about whether immigration laws restrict the competitiveness of the country’s private sector was worse than last year.

In the rest of the top ten, Sweden remains in third place and Singapore moves up to fourth place to gain a place. Switzerland has moved up to 5th (from 6th). “Switzerland is well on its way to become a fully developed digital nation with satisfactory digital infrastructure and regulation, data governance and digital approach. However, an important success factor for the future will be the introduction of a digital identity program in the country. Top Ranked Countries, such as Denmark and Singapore, are already making strides in this regard,” Briss said.

The US (second) sees declines across the board, with technology being the biggest factor. Although it was in a relatively strong position, there is much room for improvement in terms of the skills needed to discover, understand and create new technologies (the “knowledge” factor) according to the rankings.

Due to the limited reliability of the data collected, Russia and Ukraine are not included in this edition of the rankings. Bahrain was a newly measured economy in 2022, making its debut in June’s IMD World Competitiveness Rankings.