Infographic: How many Palestinians have been imprisoned by Israel?

There are about 4,450 Palestinians in Israel – including 160 children, 32 women and 530 administrative prisoners – in prisons.

Every year on 17 April, Palestinian Prisoners Day is celebrated to highlight the plight of people in Israeli prisons and their struggle for freedom against Israeli occupation.

During 2021, the Israeli military arrested approximately 8,000 Palestinians, including more than 1,300 minors and 184 women.

As of April 10, 2022, there were 4,450 Palestinians in Israeli prisons in Israel and the Occupied Territory.

For Palestinians, they are political prisoners fighting to end Israel’s illegal occupation. of them:

Israel is the only country in the world that tries children in military courts, often depriving them of their basic rights.

According to Admir, the Israeli military has imprisoned more than 12,000 Palestinian children since 2000.

Most of these children were charged with “throwing stones”, a crime punishable by up to 20 years in prison under military law.

Currently, 160 Palestinian children are held in Israeli prisons, most in pre-trial custody and have not been convicted of any crime.

One of the most painful cases of child prisoner is that of Ahmed Mansara, who was arrested at the age of 13, brutally interrogated and then sentenced.

After a six-year sentence, and six months of detention six months ago, he is only 21 years old. 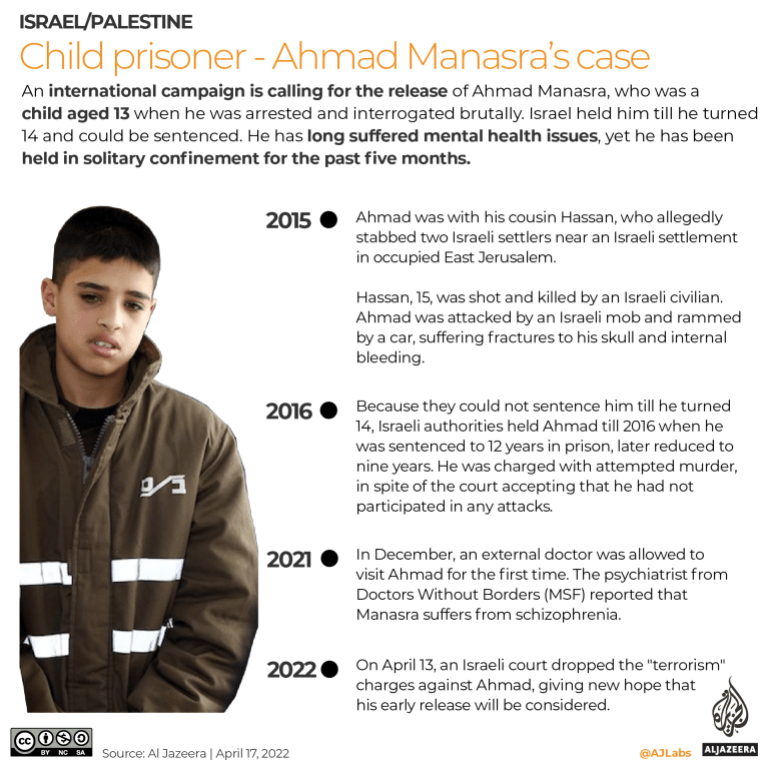 Ahmed was accompanied by his cousin Hassan, who in 2015 allegedly stabbed two Israeli settlers near an Israeli settlement in occupied East Jerusalem.

Hassan, then 15 years old, was shot dead by an Israeli civilian, while Ahmed was brutally beaten up by an Israeli mob and rammed into a car.

He suffered a skull fracture and internal bleeding.

At the time, Israeli law stated that children under the age of 14 could not be held criminally responsible.

To circumvent this, the Israeli authorities waited until he was 14 years old to serve the sentence. The law was changed in August 2016 to allow prosecution of young children.

Ahmed was charged with attempted murder and sentenced to 12 years in prison. Later the sentence was reduced to nine years.

Ahmed has been battling mental health issues for a long time. In late 2021, a psychiatrist from Doctors Without Borders was allowed to visit him and was diagnosed with schizophrenia. It was the first time an outside doctor was allowed to see him.

Despite Ahmed’s mental health issues and diagnosis, he has been kept in solitary confinement for the past five months.

Israeli forces have shot and killed at least eight Palestinian children since the beginning of 2022.

There are currently 530 Palestinians in “administrative custody” – without charge or trial.

Detainees, including women and children, may be held by the military for a period of renewable six months on the basis of “secret evidence” that neither the detainee nor his lawyer is allowed to see.

According to international law, an occupied state is prohibited from moving and keeping prisoners outside the occupied territory, but Israel does so with a number of prisons within its borders.

Over the years, many detainees have gone on hunger strikes as a nonviolent protest against their detention.

What is ‘quiet quitting’ and why is silent resignation at work a trend in America?