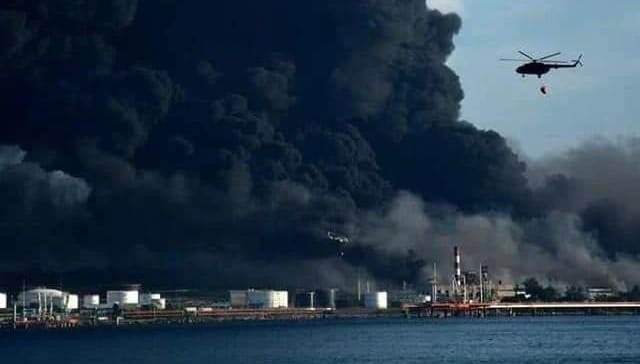 Due to the critical condition of the fire, which remains out of control four days after the initial eruption, water supply officials in Matanzas have clarified the status of this liquid’s quality to the population.

“The area of ​​the well from which our aqueduct is supplied is far from the area of ​​occurrence. Our supply sources are underground.

The extracted water is continuously chlorinated and its quality checked at the outlet of the distribution center.

“Any situation with the water supply is promptly reported by our company through the mass media and without verbal comments. The closure of the Antonio Guitares Thermoelectric Power Plant will result in our company’s ability to extract, operate and supply water emergency generator set to maintain the service vitality”, he said.

The only provision indicated for the residents of Matanzas is the continued use of the facade.

“So far, in a joint analysis with the Ministry of Public Health, we have no evidence of an impact on human health. We are constantly monitoring all health institutions, because as we know this is a contingency that may occur over time. Will grow with, ”Sitma Minister Elba Rosa Perez Montoya explained.

“This is a large-scale event that has the same degree of environmental impact and we are evaluating in every way with a group of experts from the Institute of Meteorology and the province which are turning out to be very useful. Not only Matanjas It is being monitored in each of the most vulnerable places, but also in Mayabec and Havana,” he said.