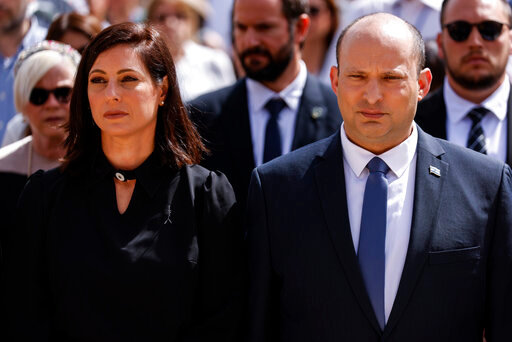 JERUSALEM ( Associated Press) — The family of Israeli Prime Minister Naftali Bennett has received death threats and bullets in the mail for the second time this week, police said Thursday.

The target of the threats was Bennett’s 17-year-old son, according to an Israeli official familiar with the matter. The official spoke on condition of anonymity as per rules.

Officials did not say who might be behind the threats.

Bennett, who led a small nationalist party, faced heavy criticism from Israeli hardliners, who accused him of abandoning his ideology. In 1995, Prime Minister Yitzhak Rabin was assassinated by a Jewish supremacist who was opposed to his peace efforts with the Palestinians.

In addition, tensions with the Palestinians have risen recently after a series of deadly Palestinian attacks on Israeli cities, Israeli military raids in the occupied West Bank and clashes between Palestinians and Israeli police over a sensitive Jerusalem holy site.

“My brothers and sisters, we cannot, we cannot allow the same dangerous gene of factionalism to destroy Israel from within,” Bennett said at a nationally televised ceremony Wednesday night.

Bennett’s speech, coming on one of the most important days of Israel’s year, came in a deeply personal context. On Tuesday, his family received the first letter, in which he received live bullets and death threats. Israeli officials have beefed up security for the prime minister and his family and are investigating.

This prompted his eldest son Yoni to write on Instagram about how disturbing the episode was.

“It’s so sad to see real people write such horrible things,” he said. “To think that he lives and breathes like me but has a mind created by the devil.”

Israeli media said Yoni, who is 17, was the target of Thursday’s threats.

Police have said that they are probing both the incidents. He has put the investigation on hold and released few details.

Bennett leads a narrow coalition that has recently lost its parliamentary majority. His government is made up of eight parties that bear little in common with their shared animosity towards former prime minister Benjamin Netanyahu, and Netanyahu, now leader of the opposition, has worked hard to deepen divisions within the coalition.

Bennett’s government was formed after four inconclusive elections, which underlined the rift in society on key issues including conflict with the Palestinians and relations between religious and secular Jews.

Akshay Kumar reveals why he doesn’t comment on Twinkle Khanna’s column: ‘I find it difficult…’

Keeler: CU Buffs looked like Broncos of Pac-12 basketball against Oregon. No offense. No heart. “We kind of quit a little...