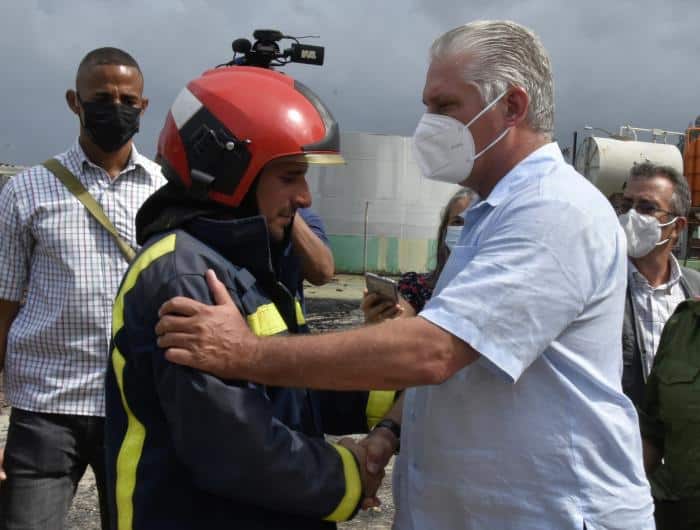 MATANZAS.- “Today has been the best day, victory leads to victory”, confirmed Miguel Diaz-Canel Bermudez, First Secretary of the Party Central Committee and President of the Republic, from the advanced command post for firefighting yesterday afternoon. Industrial Area.

Between members of the Political Bureau and the Secretariat of the Central Committee of the PCC, members of the government, the heads of the Revolutionary Armed Forces, and officials from the Ministry of the Interior and the province, the head of state analyzed the latest details of the fight against fire.

Between our experienced fighters and the specialists of the Venezuelan Brigade, who came to support Cuba, diverse views were heard, converging on a single objective. An encouraging phrase emerged: “We’re going on the offensive.”

Diaz-Canel compared the disaster scenario to the devastating blow of an erupting volcano. They talked about explosions, about water pressure, what was lost and what was preserved; About the drone, which has been a tremendous tool.

Leaving the complex, to move to another point closer to the event, the dignitary exchanges with a group of experts from Venezuela, who work side by side with his brothers from Mexico and Cuba. “Thank you for the faith,” said a son from the Bolivian homeland.

The setting is the typical landscape, in shades of grey, of destruction, but also of the movement of men who never stop fighting with the fire. The president reflected that only heroism has made it possible to reverse the disaster situation, and inquired about “the hardest thing that remains to be done”. It was then that an extraordinary fighter spoke of a certain essential tactic: vigil and kill fire, vigilance and fire kill …

Cubans and Mexicans who worked tirelessly at the scene of the disaster came to greet Díaz-Canel. To the sons of the land of Benito Juárez, the dignitary expressed: “Thank you very much for your solidarity and support.” A voice came from the calm and experienced faces of the interlocutors: «We come with all our hearts to support the Cuban people. We are at your service”.

“They have done very well”, applauded the head of state, in the midst of a landscape rocked by huge trucks, dotted with hot air and covered with dark powder, occupied by human beings who put up with heavy work and heavy loads. carry traces. Volcano-proof will.

The Cuban people have not lost their virtues

Journalists asked Diaz-Canel whether this Tuesday has been the best of the most terrifying days, and about his view that victory creates victory. The President reflected: «I think so (it’s been the best days), not to say that it’s been the worst days at least; But it’s been a really good day, and it has a lot to do with the things that happened and the things we’ve seen right here in this place».

He considered that control had been achieved, it could be said in the first phase of the confrontation with fire, that such an achievement was “a strategy prepared jointly between the Cuban, Mexican and Venezuelan armies.” to do with.”

He stressed that “all the water pumping capabilities needed to withstand the magnitude of this fire” could be built in, and explained that there was “a lot of technical work to be done, we had to get pumping plants from Venezuela.” and Mexico. , with certain specifications and, in addition, to rehabilitate part of the system damaged here by fire, and to make a set of changes».

Creativity in the field, improvement of structures, connections to integrate diverse technologies; Such works were mentioned by the President, who also spoke about the search for places for the installation of hydraulic pumps, from which as much water can be removed as possible.

The First Secretary recognized “the effort of the builders and hydraulic workers, who built all these retaining walls with sand which, in the most complicated moments, prevented the spread of the flames, especially those which they Came with burning fuel is dragged to critical targets. ”

Similarly, he highlighted the work of “the forces of the Ministry of the Interior, the Revolutionary Armed Forces, our firefighters, the comrades who have been working tirelessly in helicopters – and the helicopters have been decisive here with water sprinkling.” for-»; and he “emphasized the soldiers of Venezuela and Mexico, who came with a colossal commitment to the mandate of their presidents, regardless of the mandate of their institutions.”

Regarding that friendly force, Diaz-Canel affirmed that the commitment of these brothers “is what one sees when they express themselves, when they greet, when they talk.” He defined, “also come with a people’s commitment, with a commitment that is marked by the friendship between our countries, our people and our governments.” He praised the work environment and complementarity among all, the key to reaching tomorrow’s results.

The president pointed out that it is important that “belief in the outcome does not take away our ability to think”, because experience in this type of event, he said, makes it clear that “there are still possibilities that the fuel will catch fire again”. ; Therefore, we must continue to work on putting out what is going on, and later, with vigilance and with some techniques, where the fuel is removed, where it remains cool and the fire can re-emerge. Other chemical substances are applied to prevent it.

To the extent that progress has been made, and in the shortest possible time, he said, “we will be able to enter to heal the victims.” He did this with reference to “the firefighters who offered their lives at the first moment of confrontation with this horrific.” It’s a moment, he reflected, “It has a lot to do with the pain of the families who have been in pain for days to hear from their loved ones. I think it’s going to be a tough, difficult moment, whose We also have to be ready for this. We have to give full help to those families.”

As to future missions, and as soon as they could be launched, the president spoke of a survey of “all damage and all impacts” in order to “determine restoration work.” Diaz-Canel shared this certainty: “We’re going to reclaim this base of Super Tankers.”

He said the country’s leadership and all responsible officials closely monitor the pollution situation, “so as to have the least possible impact,” to reduce pollution that will persist during the fire fighting.

“All issues are being worked out in an integrated manner. Today is the day in which we are most certain that we are close to victory,” the president asserted: “It has been a day of victory in confrontation (for fire), and victory produces victory, so I believe We will be in a position to get out of this incident in the shortest possible time.” He warned that hard work and recovery lies ahead.

Diaz-Canel once again recognized “all the support given by the press” for “how effective, purposeful, creative it has been, and above all how they have been supported by the beautiful life stories that are here.” . , of delivery, of work, of many protagonists who are in fundamental stages and who you are able to reflect from an emotional, emotional point of view. What is being done gives a lot of credibility.”

Of the people of Matanzas, the dignitary recognized that he had been very disciplined, and in his reflection he did not overlook that “a lot of attacks on social networks, a lot of false news, incitement of distrust, and that could have created a disorder, some distrust”; But, he insisted, Matanjas, in addition to showing discipline, has participated, donated blood, showed many signs of dedication and solidarity.

After the Cuban people, the president said: “People from almost the whole country have arrived here,” and listed the works of cooperatives, self-employed workers, MSMEs, state institutions, mass organizations.

He declared that “it is giving a demonstration that the Cuban people have not lost their virtues, on the contrary, and demonstrates it in those moments in which it is really necessary to demonstrate: solidarity, love, trust, support.” , and desire, a lot of desire and a lot of commitment.

“This is how we will continue to win, adversity after adversity, and victory after victory,” he assured.

From DRC to NBA, Congolese player Byombo gives others a chance at a better life