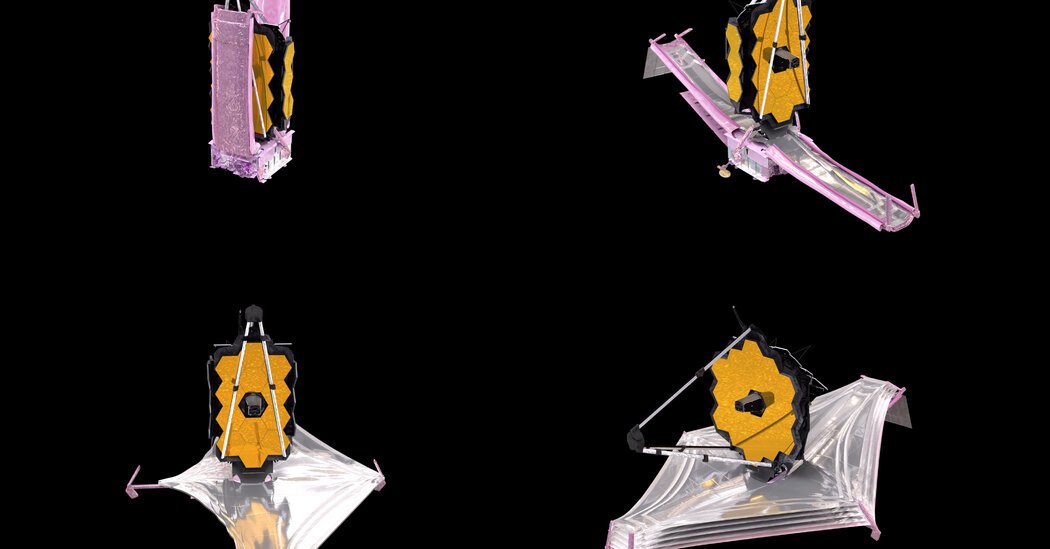 The most powerful telescope ever launched into space is nearing the end of a meticulous assembly process that has kept astronomers on edge for weeks.

Since its Christmas morning launch, the James Webb Space Telescope has made all the right moves. It is now entering the final stages of its complex deployment phase.

In these terminal stages, two panels on either side of the telescope’s array of 18 gold-plated hexagonal mirrors, folded back during launch, must snap into place to meet Webb’s honeycomb-like reflector. The 21-foot-wide mirror sends light from the universe to a secondary mirror, which then bounces the light into the telescope’s main infrared sensor.

Opening the mirrors is an important milestone in the way we use telescopes to scientifically study the Big Bang, exoplanets, black holes, and our solar system. Once this is complete, NASA considers the telescope “fully positioned.”

When will Webb Telescope open and how can I see it?

The telescope’s unfolding phase is expected to end on Saturday morning, when the right-hand panel of the three remaining mirrors of the mirror section is secured. The left side completed its deployment on Friday, a process that took five and a half hours.

NASA is currently hosting a livestream on NASA TV and YouTube or you can watch it in the video player embedded above. It shows mission managers monitoring the deployment from the Space Telescope Science Institute’s flight control room in Baltimore, the telescope’s central operations center.

At approximately 10:15 a.m. Eastern time, mission managers sent the first command to begin opening the mirrors. Shortly before 10:30, the panels gradually opened so that the three hexagonal mirrors blend in well with the other 15. The staff applauded before moving on to the next steps of putting the mirrors in place. That process is expected to take at least two hours, until about 1:30 p.m. “I’m passionate about it,” NASA science chief Thomas Zurbuchen said about all the telescope’s mirrors finally clicking into place. said. “What a wonderful milestone – we see that the beautiful pattern in the sky is almost done now. Of course it needs to be captured, but what a wonderful milestone.”

But you will not be able to see what is happening on the telescope itself.

Why are there no cameras on telescopes?

Rockets and some spacecraft have built-in cameras so that engineers on Earth can monitor their behavior in space. Therefore, one would expect engineers to pack the cameras on the James Webb Space Telescope, the most expensive and technically complex observatory ever built in space, with 344 “single points of failure.”

There are no surveillance cameras on the telescope. Instead, engineers rely on switches, sensors and motors to track its health during deployment.

NASA abandoned the idea of ​​including surveillance cameras on the Web due to technical complications and risks. The telescope’s new shape and size – with one side of its sunshield receiving massive amounts of heat and sunlight and the other instrument-heavy side basking in the freezing darkness – would require several custom-built cameras. The wires and mounts for those cameras would add weight and risk to an already bulky telescope, the agency explained in a blog post.

“It’s not as straightforward as connecting a doorbell cam or a rocket cam,” said Paul Geithner, NASA’s deputy project manager for the technical side of the Webb program.

What has happened to the telescope so far?

Since Webb’s launch, engineers have completed more than a dozen key steps in the deployment phase, including hundreds of moving parts such as switches, motors, pulleys, and cables, to bring the telescope to its final form. The process began less than 30 minutes after its launch last month, when Webb’s solar array was deployed – the only move caught on video as the telescope flew into space with its rocket, which had an onboard camera .

The telescope has passed several milestones, doing well to allay astronomers’ concerns and fears that a complex structure like Webb was bound to run into snags along its million-mile trek to that location in space. where it will be. The telescope-operated, deployed antennas mechanically reveal the various organs and, in the most technically complex milestone, delicately stretched five layers of a tennis-court-sized plastic sheet, which were then used as the telescope. The ultrasensitive camera sensor is designed to protect against the heat of the sun.

Why is the telescope so important to scientists?

The Webb Telescope was designed to probe an important section of early cosmic history, known to astronomers as the Dark Ages.

The telescope will also help astronomers better study the supermassive black holes at the center of galaxies and planets orbiting other stars in our galaxy.

To obtain these scientific observations, the Webb telescope relies on a primary mirror of 6.5 m in diameter, compared to the mirror at Hubble, which is 2.4 m. This gives it about seven times as much light-gathering ability and thus the ability to look further into the past.

Another important difference is that it is equipped with cameras and other equipment that is sensitive to infrared, or “heat” radiation. The expansion of the universe causes light that is normally in visible wavelengths to shift to longer infrared wavelengths that are normally invisible to the human eye.

Engineers had to invent 10 new techniques to make the telescope more sensitive than Hubble’s. Over-optimistic schedule estimates, occasional development accidents and disorganized cost reporting dragged the timeline to 2021 and pushed the total cost to $10 billion.

Make your phone a private planetarium.

To understand the observational powers of the James Webb Space Telescope and how it will aid astronomers in their research, try these two augmented reality experiences in your own space with a smartphone logged into Instagram.

The first will show you where in space and time Webb will look with a 3-D map of the observable universe. It plots some of the spacecraft’s early targets, including potentially Earth-like exoplanets and the earliest known galaxies. Try it on Instagram here.

The second augmented reality experience shows how Webb will get a visual boost from the power of gravitational lensing.

Place a virtual black hole in your space and watch it behave like a magnifying glass around you. This same technique will help astronomers study the early universe. Try it on Instagram here.