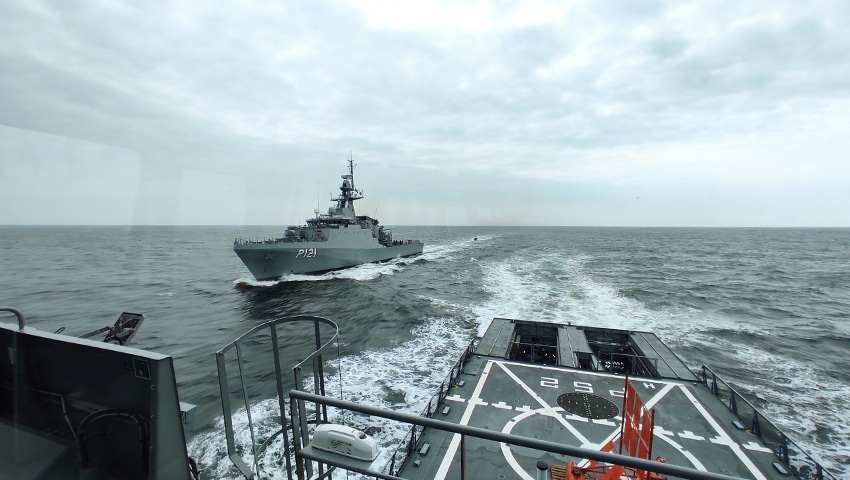 Mar del Plata – With the arrival of maritime patrol boats MB “APA” and ARA “Piedrabuena” at the Mar del Plata Naval Base, the exercise “SAREX 2022” came to an end. It began on the 10th of September off the coast of Rio de Janeiro and ended with the entrance to Mar del Plata on the 16th.

At a range of approximately 1,200 nautical miles, the units conducted medical evacuation, towing and search and rescue exercises. For its part, the rescue ship ROU “Vanguardia”, belonging to the Navy of the Oriental Republic of Uruguay, took part in some opportunity activities, taking advantage of its transit to the port of Montevideo.

During daylight hours, various simulated situations were presented that represented a search and rescue emergency.

Thus the ship’s personnel had to act on information about a damaged ship or injured crew members. “All communications were simulated between the SAR Coordination Centre, which is located on the ground, with ships in the area,” explained Navy Captain Fernando Gabriel Sabadin, who was in charge on behalf of the Argentine Navy.

Before each position was taken, all the steps planned in terms of communication were established; dissemination of information; determination of the necessary maneuvers; And the possibility of evacuating a crew member with the necessary medical consultation by radio call. Meanwhile, evacuations were carried out through small ships that were near the units.

Towing exercises were also carried out with the hypothetical case of a ship without propulsion that needed to be carried safely to the nearest port.

On the other hand, at night, communication exercises were done using lights.

For Captain Sabadin, the results of the exercise were “highly satisfactory, especially because we have been able to increase the interoperability between the two navies and continue to strengthen our ties over many years.”

Along the same lines, Ricardo Simono Morata, Captain of the Sea and War, in charge of the exercises for the Brazilian Navy, stated that “the objective of the operation was achieved and it was satisfactory due to the exchanges achieved and the strengthening of friendship. relations.” between nations. ,

“This joint exercise provided opportunities to improve the procedures used by the Argentine, Brazilian and Uruguay navies in joint search and rescue operations,” he said, adding that these types of operations should be pursued as they are not only used by armed friends rather than with the safety of human life at sea.

Argentina and Brazil have the two largest SAR areas of responsibility in the world and together with Uruguay cover a wide area of ​​the Atlantic Ocean. This is why the three countries have acted on several occasions in genuine cases of search and rescue. On this basis, Captain Sabadin stated that “this is the first time that we have conducted training at sea to improve and widen that gap, in this case, between surface media.”

Both units anchored in the western dock of the Mar del Plata Naval Base last Friday. The closing ceremony of the exercise took place on Saturday with the participation of Rear Admiral Marcelo Luis Fernandez, Commander of the Atlantic Naval Area, Senior Officers in Charge, ship owners and their crews.

On this occasion, Rear Admiral Fernández said that “Argentina and Brazil are both countries that have a very long coastline and a great responsibility in terms of search and rescue. Also work with Uruguay provides a security framework for those seafarers.” who operate in the Atlantic Ocean. To which he said: “This exercise embodies the rich history that we have in our navies and as we say here, Bravo Zulu.”

On the same day, on Saturday, the personnel of two patrol cars had a cordial meeting with sports activities.