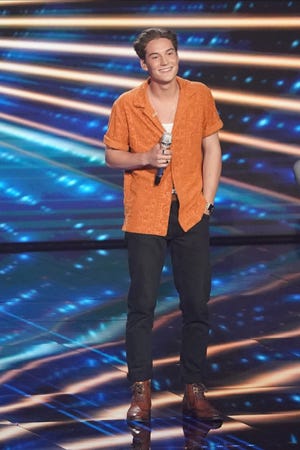 Monday night’s episode of “American Idol,” the first live episode of the season, was a jam-packed nail-biter, filled with sweet triumph and sadness.

Participants from the top 20 discovered which 10 singers got America’s vote and secured a place in the top 14. The remaining 10 contestants sang their hearts out for the last time to judges Katy Perry, Luke Bryan and Lionel Richie, hoping for one of the four remaining spots.

Ava Maybee, the first contestant of the evening to get to know her “Idol” lot, was sent on to the top 20. Maybee celebrated her placement among the top 14 with a soulful performance of Lizzo’s “Cuz I Love You”.

“This is the most insane experience of my life ever,” Maybee said. “I feel so honored, so grateful to be here with everyone, and to get America’s voice means everything.”

Find out which contestants found themselves in the “danger zone” after failing to make the cut for the top 10:

Known for his high-energy performances, Cameron Whitcomb changed things up with a serene rendition of “If It Hadn’t Been for Love” by The Steeldrivers.

Perry said the disappointment of landing in the danger zone may have helped focus Whitcomb’s energy and improve the quality of his vocal performance.

“It really was your best song you’ve ever done,” Perry told Whitcomb after his performance. “I’m not trying to be mean, but I just want to throw you down a few stairs because you sound better, a little disappointed.”

‘American Idol’: Kenedi Anderson talks about why she left the singing competition

Despite her breathtaking rendition of “Free Fallin ‘” last night, Allegra Miles found herself out for elimination.

Miles began Monday night with a rising performance of her original song “Tainted.” Richie said performing an original song made her shine in a different way.

“Sometimes, when you sing other people’s songs, you can not translate because you are trying to interpret,” Richie told Miles after her performance. “In this case, it’s your song. You wrote this song, and it showed. The passion, the emotion, the delivery: You were completely in control of it. ”

After learning that she’s landed in the danger zone, Katyrah Love presented a feel-good show of Chaka Khan’s “Through the Fire”.

Bryan complimented Love’s commitment to her performance and said she sang “for (her) life”.

“I still forget how much it hurts our hearts as judges this evening, but to get that news (and) to go and deliver such a performance was incredible,” Bryan said.

Cadence Baker made her case for her place in the top-14 with a power show of “I’m Your Baby Tonight” by Whitney Houston.

Perry praised Baker’s growth and reminded her that regardless of the outcome, being on “Idol” could be the starting point for a successful career.

“You grew so much, and remember Gabby Barrett did not win ‘American Idol’, but she won life and so can you,” Perry told Baker after her performance.

Sage fought for redemption with an explosive rendition of “Brown Eyed Lover” by Allen Stone.

Richie complimented the way Sage “took control” after learning she was in the danger zone.

“Your attitude was so positive, so direct,” Richie told Sage. “You owned the stage, you put your foot down and you knocked us out.”

Platinum ticket holder Jay also found himself in the danger zone, but delivered a passionate performance of “Believer” by Imagine Dragons.

Bryan was irritated by Jay’s thrilling command of the stage, calling it “a great show.”

“That action is why we gave you the platinum ticket,” Bryan said. “I know where my heart is now.”

Jacob Moran’s soulful performance of “Don’t You Worry ‘Bout a Thing” was not enough to earn him a place in the top 20. But Moran re-emerged with an impressive rendition of Katy Perry’s “Rise.”

“You are in control of your future. “I think you know it now,” Perry told Moran. “You have the fire. It’s at your feet, and you own it. ”

Elli Rowe put on a serious performance of Kodaline’s “All I Want” after not being placed in the top 10.

While acknowledging Richie Rowe’s overall growth, he also wondered if her individuality stood out enough and called her “a victim of so many people in your job”.

“It’s the best show I’ve ever seen, but it’s about a strong time now,” Richie told Rowe after her performance. “You did the best ever, but is it enough at the same time?”

Mike Parker fueled the “Idol” stage with a white-hot rendition of “Bed on Fire” by Teddy Swims for a chance to advance to the top-14.

Bryan said he was “very shocked” that Parker was in the danger zone and that it would make the judges’ deliberations more difficult.

“It’s a crazy night where people have to walk out,” Bryan told Parker after his performance. “You’re going to see an inner turmoil here between us all in a minute.”

“You’re a rock star, no matter what happens to you,” Perry told Gressett after his performance. “You do not belong in any other position. It’s your way, and I think you know it now. ”

In the end, the judges chose to save Miles, Jay, Parker and Gressett.

“We just want to let you know that you have grown so much, and we are so proud of you,” Perry told the eliminated contestants.