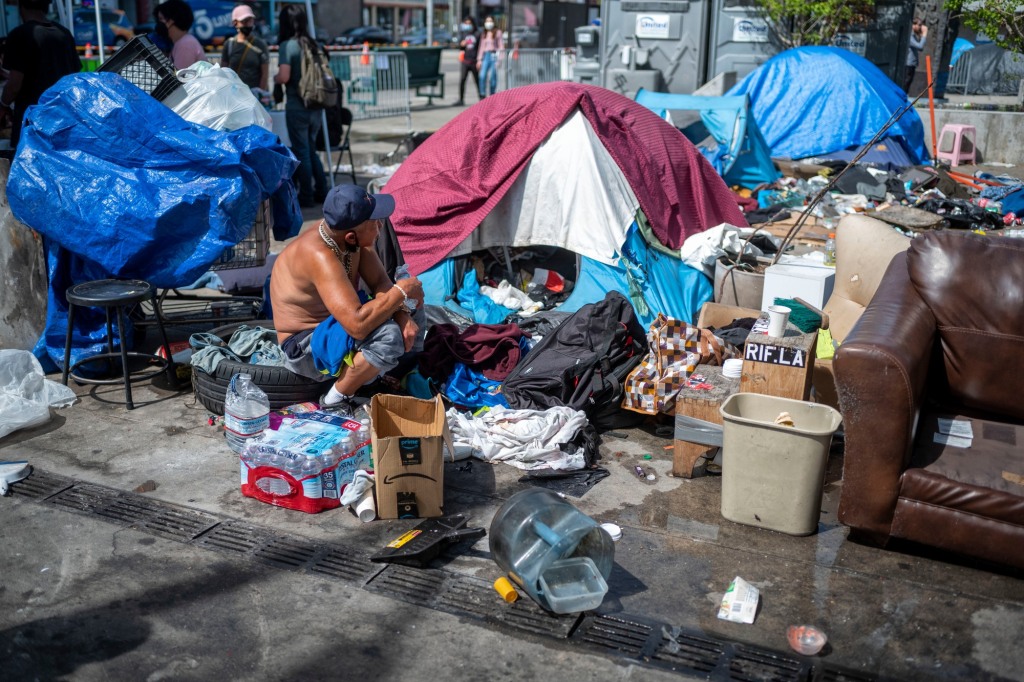 LOS ANGELES – The Los Angeles City Council is set to consider amendments to a city-wide law on Friday regulating the locations of homeless camps that would block them within 500 feet of all schools and day-care centers .

The amendment will update Municipal Corporation Code 41.18, which prohibits sitting, sleeping, lying down or obstructing the way of the public in many areas of the city. Those areas include those within 2 feet of any fire hydrant or fire plug; within 5 feet of any operational or usable entry or exit; within 10 feet of a loading dock or driveway; in a manner that interferes with any activity for which the City has issued a permit or restricts accessible passage as required by the Americans with Disabilities Act; Or anywhere within a road, including a bike path.

The law already protects the public right within 500 feet of a “sensitive” facility such as schools, day-care facilities, parks and libraries, but only if each specific location is designated by the council for enforcement.

The amendment, due Friday before the council, and approved by the council’s homelessness and poverty committee last week, would entail a complete ban on camps within 500 feet of all schools.

Counselor Joe Buscano proposed such a move last year, but it never gained traction. The issue was revived earlier this year, in part due to the insistence of Los Angeles Unified School District Superintendent Alberto Carvalho, who said teachers, principals and parents expressed concern about homeless camps near campuses. is of.

“I’ve seen primary schools with conditions that none of us as parents would be acceptable to children. Individuals with mental illness, some of them completely unclothed, can’t hear children’s ears. I abuse,” Carvalho previously told the council.

He said he was concerned about the “trauma” and “long-term, short-term effects[and]effects on children’s psychological and cognitive development.”

Buscano, who sits on the Homeless and Poverty Committee, said last week that approving the amendment would “protect the most sacred places among us, our playgrounds and schools.”

“To me, the choice is clear, and based on where I’m coming from, you shouldn’t be surprised, as I called it about a year ago,” he said. “… let’s go over it and get it done and protect our students, our faculty and their parents.”

The committee approved the amendment on a 3-1 vote, which was opposed by Councilwoman Nitya Raman.

Raman, who also opposed the original anti-camp measure last year, said he did not believe the amendment would effectively advance the city’s fight against homelessness, noting the paucity of shelter beds people need to stay in those camps. can be evicted from those who will be targeted. law. He also pointed to the city’s “scarce” resources to address homelessness and enforce such regulations, and said that the committee and council needed to focus on a more comprehensive solution to the issue of homelessness as a whole. Is.

The city ordinance already exists and prohibits cantonment and sleeping within it:

The ordinance allows the city to hold camps for longer than one year in areas deemed to be a continuing threat to public health or safety, for reasons including:

Those who contravene the ordinance shall face a contravention or citation, but “a person who knowingly opposes, delays or prevents a city employee from carrying out this section or who is an authorized The city employee knowingly refuses to comply after a request has been made to do so” could face high fines and misdemeanor charges according to the ordinance.