Laguna Woods has a connection between arts and hearts 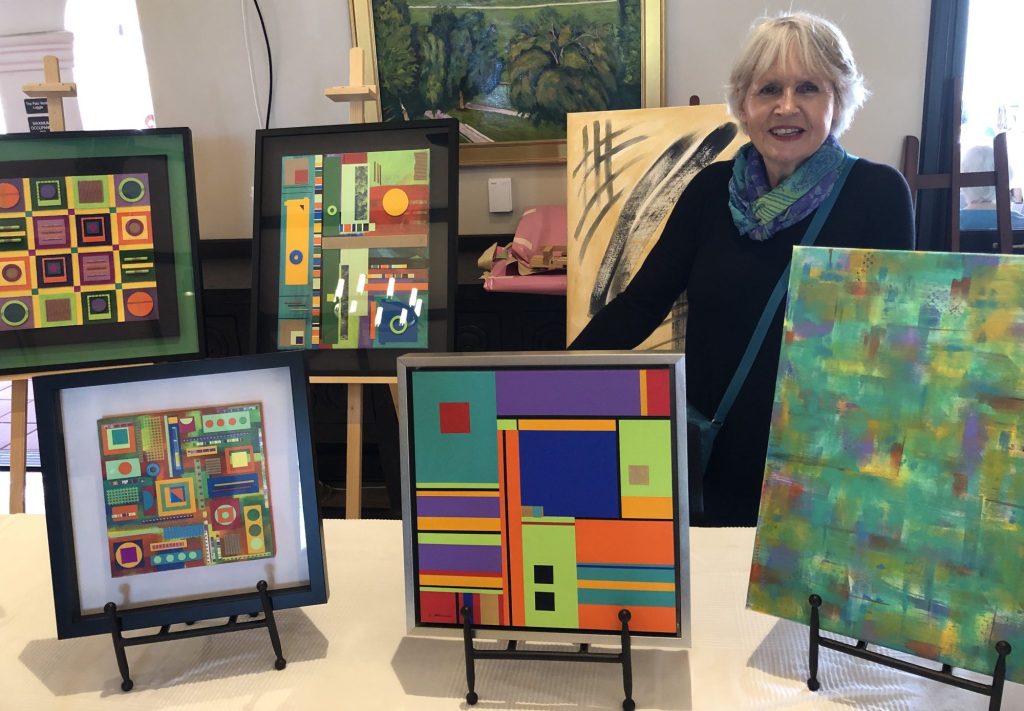 Woodworkers, quilters, painters, printmakers, jewelry makers, ceramicists, anyone working with a crochet hook or knitting needle, and even a writer, will be at Clubhouse 2 in early June for the eighth annual Laguna Woods Village Art Engaged in affair.

Outside on the patio, guests danced to the jazzy tunes of The Woods combo, which featured masterful renditions of hits like singer Moki Lund’s “Summertime.”

Inside, artists display and sell their wares and talk about their art and the joy it brings.

Christine Kelly began woodworking after taking furniture making classes at Orange Coast College. She had come to the village from Orange a year ago and fell in love with the woodworking studio in Clubhouse 4. She says she is the only woman in the clubhouse to do woodwork, making assorted boxes and hearts, and hopes that more will join her.

“I always learn new things there,” she said.

Ami Gilad, who came to the village about six years ago, is an engineer who took up woodworking after retiring. A small guitar and a small replica of a golf cart he built impressed with his fine attention to detail.

“I started making small pieces of furniture as a kid and also taught ceramics,” Irving said. He also ran a psychiatric clinic for young adults in the 1960s.

Georgie “Gigi” Hackford has taken painting to a different plane by abandoning flat surfaces such as canvas: she paints delicate female faces on clay flower pots.

“Hard edge, soft edge and now no age,” Hackford said, adding that pottery is a perfect outlet for anyone without a studio.

One pastel artist, Jim Braque, takes his medium to a higher level using a new technique that eliminates the mess and hassle often associated with soft pastels. Instead of forcing a large amount of pigment onto the paper initially, he creates bases of lighter colors and spreads the medium around with a shaper, a brush-like tool that has a plastic head instead of bristles.

The results are works that an untrained eye might at first see as photographs rather than pictures. The secret also lies in the paper, the surface of which is sandy.

“My process allows for more control, and it also eliminates the need for fixtures,” Brake explained.

“Whenever the mood strikes me, I paint whatever I want,” she said.

On her table was a painting of an impressive sailing ship with views of the sea and depictions of delicate flowers.

Watercolor artist Tim Hahn moved to the village in 2020 with his wife after living in Romania for 25 years.

“We were probably going on a mission trip for a few years and just fell in love with the place,” he said.

An artist since the eighth grade, Hahn paints trees, giving them a slightly surreal look, as well as sea creatures.

“I want to show the beauty of God’s creation,” he said.

Eva Altmann creates the colorful, rigid collages that have become a trademark for the Munich-born artist. Recently, she has experimented with soft-edged painting, but anyone with a penchant for artists such as Piet Mondrian will appreciate the works of this former art teacher.

Donna Carback shows off the stunning quilt created by Crazy Quilters of Laguna Woods. The group lends its artistry to a number of charitable causes and organizations. One such composition is “Chemo Quilts” for City of Hope in Duarte. In the works are quilts for veterans and firefighters.

“We want to make quilts for them because they help so many of us here,” she said.

Among the jewelry makers at the fair, Margo Flynn channeled Iris Apfel with her dramatic pieces featuring large beads and vintage flowers. Flynn, who has been a jewelery maker for 20 years, said she enjoys wearing large pieces herself.

“I’m small, but I love dramatic accents,” she said.

Their daughter Gillian came from San Diego to help sell and model Flynn. The old bead doesn’t quite chip, so to speak, Gillian likes to sell vintage items.

“I drove him in a stroller through flea markets—in London,” Flynn said.

Last but not least, painter/writer Jim Gibson was the featured artist at The Art Affair, occupying a separate room for the performance of “Not Paid Eleven Saints an Hour to Think”, a memoir of his service in Vietnam. Were.

Known in the village for his stunning paintings of the Equestrian Center’s horses Blaise and the late Rascal, which were exhibited at a previous art show at the community center, Gibson drew on some of his experiences as a combat medic in Vietnam. has changed.

Overall, the Saturday afternoon gathering once again displayed the diversity of the village’s artistic prowess and brought joy to all.