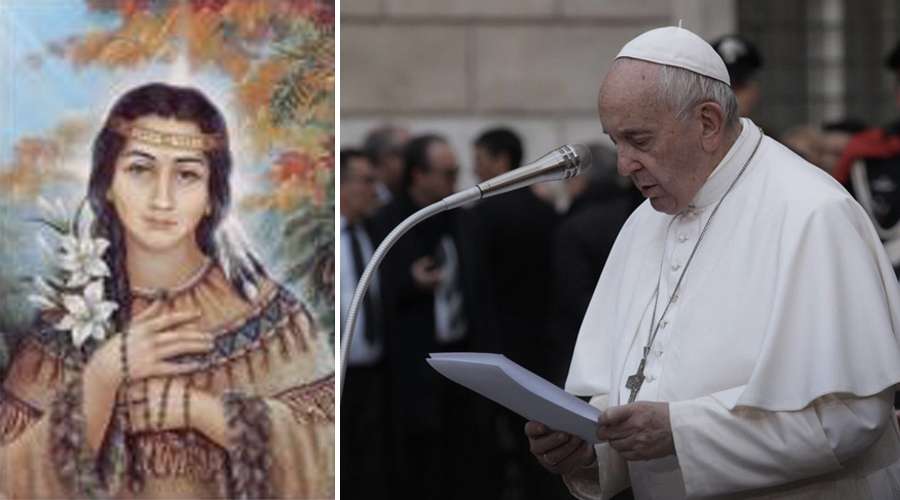 Pope Francis will bless the statue of North America’s first native saint during his visit to Canada July 24-30.

This is St. Catherine (Kateri) Tekakwitha, the first red-skinned saint in the United States, who is considered the “patron of nature and ecology” along with St. Francis of Assisi.

The papal blessing of the statue of this indigenous saint will take place during the meeting of Pope Francis with the indigenous population and members of the parish community of the Church of the Sacred Heart of the First Nations, which will take place on Monday, July 25.

Sacred Heart First Nations Church is located in Edmonton, Canada and was built in 1913.

This is one of the oldest Catholic churches in the city, known for its special pastoral attention to the poor and disadvantaged.

As described in an official Vatican document, “it is the first of its kind in Canada” because there “the Catholic faith is expressed in the context of Aboriginal culture.”

In keeping with this, the building is adorned with “many unique works of sacred art created by local craftsmen” and over the years, “many immigrants and refugees who came from all over the world to settle in Edmonton have made Sacred Heart Church their spiritual center.” house.

His mother was an Algonquian Christian who was captured by the Iroquois and freed by Tekakwitha’s father, a Mohawk chief.

At the age of four, his parents and brother died of a smallpox epidemic. Due to the same illness, she was left with a disfigured face, severely damaged eyesight and in the care of her uncles.

At the age of 11, Catalina learned about the Christian faith when Jesuit missionaries arrived in her town, accompanying the Mohican governors to sign peace with the French.

A young woman was able to be baptized at the age of 20 after facing opposition from her family and rejection from her community.

He had to flee his city until he reached some of the Christian communities in Canada.

Soon after, she took her first communion on Christmas Day and took a vow of celibacy. During his short life he maintained a strong devotion to the Holy Sacrament.

From the moment of her death, people were filled with great devotion to her, and many pilgrims came to visit her grave in Konavag.

In 1884, Father Clarence Walworth erected a monument next to her grave, which became known as the “Mohawk Lily”.

Saint Catherine was beatified by Saint John Paul II in 1980 and canonized by Benedict XVI in October 2012.

According to the Martyrology, the Catholic Church celebrates the feast of Saint Catherine Tekakwitha every April 17th.

Qatar will require Covid tests from fans going to World Cup, whether they have been vaccinated or not

a goodbye full of symbols

Successful “crossover” of Mexican avocado to the US market

Where is Canada United States Women’s Basketball being broadcast today?

What would British currency look like without Queen Elizabeth II’s face?

“They looked at us as if we were aliens,” Belinda said of a restaurant where she was “abused.”