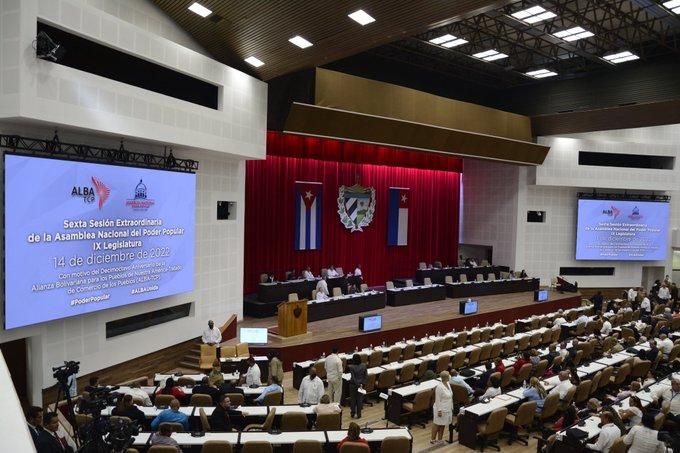 3.00 p.m. The Sixth Extraordinary Session of the National Assembly of People’s Power, in its IX Legislature, this Wednesday marks the 18th anniversary of the Bolivarian Alliance for the Peoples of our Americas-Peoples Trade Treaty (ALBA-TCP).

Addressing those present, Parliament’s Speaker Esteban Lazo Hernández insisted that 90% of the deputies were present, so there was a quorum to meet.

“It is an honor for the ANPP to celebrate, in an extraordinary session, the 18th anniversary of the creation of ALBA, a joint declaration between Fidel and Chávez that marked the beginning of years of cooperation and political agreement with concrete results for social development people in terms of health, education, others,” he said.

Lazo Hernandez noted that, in recent years, amid further challenges, air interconnection between its members has been promoted and assistance has been provided to sister countries in the COVID-19 pandemic and other difficulties.

On the occasion of the eighteenth anniversary of the Bolivarian Alliance for the Peoples of Our America-Peoples Trade Treaty (ALBA-TCP), this 14 December at 3:00 p.m., the Sixth Extraordinary Session of the National Assembly of Popular Power, in its IX Legislature, Havana In the Palace of Conferences.

Several leaders of the ALBA-TCP member states, an organization made up of Venezuela, Bolivia, Nicaragua, Dominica, Antigua and Barbuda, Saint Vincent and the Grenadines, Saint Lucia, Saint Kitts and Nevis, Grenada and Cuba, participated. meeting.

Havana will also host the XXII Summit of Heads of State and Government of the Bolivarian Alliance for the Peoples of the Americas-Peoples Trade Treaty (ALBA-TCP) today.
According to information published in Cubaminrex, the meeting will allow an exchange on the progress and challenges of this agreement mechanism for the benefit of the participating nations.

#AlbaUnida is in today #cuba, @ Cuban Assembly session #Now heexceptionally, on the occasion of the 18th anniversary of @ALBATCPThe integrationist dream of Fidel and Chávez.