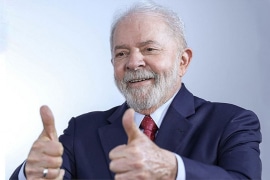 Reinstated in politics since March 2021 and confident that he can rebuild the country, Lula insists that with his victory in the elections, fascism will “return to the sewers of history, from where it should have never come out.” ,” pointing to the nearly four years of right-wing leader Jair Bolsonaro’s administration.

At the age of 76 and with the energy of 30, as he defines himself, the founder of the Workers’ Party (PT) once again after serving 580 days in political prison (between April 2018 and November 2019) Will seek a third term and with his conviction, to curb the ex-army’s hunger for re-election.

The manipulated actions of the defunct Lava Jato judicial campaign, headed by former coordinator Deltan Dallagnol and former judge Sergio Moro, were enough to remove Lula from the 2018 elections and pave the way for Bolsonaro’s victory in the elections.

As expected, the former Labor leader later faced an avalanche of accusations in the courts, but over time he showed the truth without blame and an unparalleled moral purity. The former ruler was able to regain his entitlement and also registered an impressive 26 victories in the Federal Supreme Court.

According to analysts, such judicial awards were brought to light once again, organized by groups in the federal public ministry and the justice system to destroy Lula as a political actor as well as deny her electoral rights. Prey.

Clearly, they testify to the legal and media harassment that the PT member was a victim of. Since the end of his imprisonment, the former head of state has been in court more than 20 times and exposed the law (legal war) he was aiming for.

His most symbolic victory came at the Supreme Court, which quashed four actions against Moro, declaring his practice as biased and questionable.

After the Supreme Court confirmed on June 23, 2021 that the former magistrate had acted wrongfully in judicial cases, Lula’s defense indicated that the ruling was a “victory of the law” and the restoration of due legal process and “the power of the judiciary.” of credibility”. in Brazil”.

He reiterated that, since the first written statement, in 2016, Moro has used the position of judge to bolster the practice of law and “foster a true crusade against former President Lula.”

He was born in 1945 in the city of Cates, Pernambuco State (Northeast), in a two-bedroom house with earthen floors. With no electricity, no sewage system, no bathroom or shoes, the boy and his family, in search of luck like thousands of other Brazilians, traveled to So Paulo, where they worked at the Santos dock to help with household expenses. began.

An eight-year-old street vendor and nine-year-old a shoeshine boy, he became a dry cleaner’s assistant in his early teens. Working in a metallurgical factory at the age of 14, he was admitted to the Mechanical Turner Technical Course.

Impressed by the size and prospects of the large city, Lula was persuaded by a brother, then a member of the underground Brazilian Communist Party, to attend union meetings.

For the first time he came in contact with the hardships of the working class and learned expressions like wage pressure and strike fund. A skilled negotiator, he was invited to fill a substitute vacancy in the leadership of the union that would be elected in early 1969, thus inaugurating his career as a union leader.

As a mechanical turner and an alternative to union leadership, they married at the age of 23. Two years later he lost his son and wife, who was eight months pregnant, to hepatitis due to anemia and the carelessness of the health professionals who treated him.

With one of the brides, Miriam Cordeiro, he had his first daughter, Lurion. He married a second time to Marisa Leticia, also a widow, with whom he would have three children (Lula would also register his stepson Marcos, the child of a woman who did not know his biological father). In 1975, before his 30th birthday, he became the president of the union.

He later entered politics. During the military dictatorship (1964–1985) all opposition was united in the Brazilian democratic movement. With the loss of governance, the two-party system came to an end.

When the creation of political parties continued, there was a great fragmentation because of the ideological diversity, especially in the democratic group.

This was the context in which the PT emerged, which was founded on February 10, 1980, and was identified with leftist ideas. Its founding manifesto defended flags such as political participation of workers, the creation of a party dedicated to the people and the fight against the current economic and political system.

The organization emerged as an enabler of change in the lives of city and rural workers, left-wing extremists, intellectuals and artists. Years later, Lula was a federal deputy and presidential candidate.

When he lost the election to the government of So Paulo in 1982 and planned to quit politics, “I visited Cuba and Fidel Castro told me he was not a loser, because no activist had ever got so many votes in an election before. It encouraged me to stay in politics,” he told Prensa Latina on one of his visits to Brasilia.

Lula wants to redirect Brazil “on the path of sovereignty, development, justice and social inclusion, democracy and respect for the environment.”

He denounced the unbroken moment the South American veteran is going through as “one of the most grim in our history, one that forces us to set aside potential differences to forge an alternative path to incompetence and authoritarianism that rule over us.”

Historians say PT is the best president in recent Brazilian history for his massive social aid program like the Bolsa Familia, which helped lift millions out of poverty and left power, with an approval rating of over 80 percent.

He now favors the ouster of the former paratrooper due to the nearly 700,000 deaths and economic crisis caused by Covid-19 in Brazil.

“And it is important to understand that the Bolsonaro government is an accident, that it will pass in the form of (former President Donald) Trump in the United States. Brazil and the world deserve something better than Bolsonaro,” Lula finally insisted on Prensa Latina.