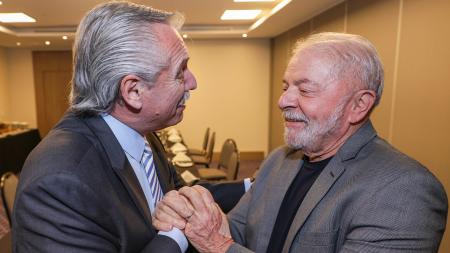 Fernandez and Lula meet in Brazil after ballot

After meeting with the winner of the ballot at a hotel in So Paulo, President Alberto Fernández predicted this Monday that Luiz Inácio Lula da Silva would visit Argentina “before taking office” as Brazil’s new president.

“He told me he was going to meet us before he took office”indicated to the President in announcements to the press, and said that “With Lula we will have a worker for Argentina to enter BRICS”A coalition of nations made up of Brazil, Russia, India, China and South Africa.

In an interview with C5N in Brazil, Fernández also said that if he remained silent during the government of Jair Bolsonaro it was to “preserve the institutional responsibility, keep Mercosur alive and keep the link with Brazil alive, in the hope that In that things will change, and today they have changed.

The head of state also revealed that while he was at the Intercontinental Hotel in Sao Paulo, Lula received a call from US President Joe Biden.

“While He Was Talking To Me, He Answered A Call From Joe Biden”indicated to Fernandez and said that after that conversation “I gave him my idea of ​​how we are to cope with relations with the United States at this time”,

“The gas we can extract from Vaca Muerta could supply the whole south of Brazil”Fernandez revealed that he had discussed the issue with the neighboring country’s elected president, Lula da Silva, who was “very interested.”

The Argentine president also indicated that he talked about this with Lula. Economic relations between Argentina and Brazil and, within this framework, the exchange of products such as minerals and food bilaterally and between the two countries and the region with the world.

Alberto Fernández met with Lula this afternoon after his victory in this Sunday’s vote in Brazil and anticipating a forum in which the leaders of the Workers’ Party (PT) would play a key role in “reunification in the region”. ,

Arriving at the meeting, Fernández expressed his “desire to give the President-elect the hug he deserves” and said: “Lula is a good man, he is the leader of the field. We are very happy”,

In this context, he recalled his visit to the Curitiba prison in the state of Paraná, when he met the winner of the ballot in Brazil.

President Lula was accompanied by Foreign Minister Santiago Cafiero and Argentine Ambassador to Brazil Daniel Cioli. “Lots of expectations. We’ve just arrived and now they’re about to meet. Then it’s going to be lunch”A few minutes before the start of the meeting, Presidency spokeswoman Gabriela Cerruti is also present in the Argentine delegation in Brazil, said Mr.

Fernández is the first president to meet with an elected president of Brazil, defeating Bolsonaro with 50.9% of the vote compared to 49.1% of the current president, who was running for re-election.

All my love, my admiration and my respect, dear fellow. We have a future that embraces us and calls us.@LulaOfficial pic.twitter.com/XEbKPI42O0

Alberto Fernández, who left for So Paulo at 9 pm, had previously expressed his “deep joy” at the victory achieved by Luiz Inácio Lula da, leader of the Workers’ Party (PT), in an interview with Radio Parfil. Silva. , in the disputed ballot in Brazil, and pointed out that “It is a pleasure to have a person like him with leadership potential in this field,” he said.

In addition to Cafiero and Scioli, the Secretary General of the Presidency, Julio Vitobello; Legal and Technical Secretary, Wilma Ibarra; Presidency spokeswoman Gabriella Cerruti; and representatives of the Front of All Eduardo Valdes and Carlos Heller, specified official sources.

“He is a leader like no one has seen before”Alberto Fernandez said about the leader of the PT.

In this framework, Alberto Fernández stressed that Lula’s inauguration as President of Brazil on January 1, 2023 would help “reconnect the continent”.

“I have worked with him several times in the office and as a colleague. One of the great traits he has is authentic leadership, and he comes at a time when the region has seen many changes. Lula’s arrival to the continent Can help reunite where globalization is in question and acquires another meaning. The CELAC (Community of Latin American and Caribbean States) lacked a Brazilian presence,” the Argentine president said.

In addition, he highlighted the value that Lula da Silva’s electoral victory in Brazil is “politically represented” because of the influence of “his leadership in the region”.

“I am very happy for what Luiz Inácio Lula da Silva’s election victory in Brazil represents politically and what his leadership represents in the region; it is an intimate, personal pleasure.”Fernandez insisted.

He also recalled that he did not think of “speculation” at the time that Lula was a candidate and traveled to a neighboring country to support him while he was in prison.

“I was so convinced to see Lula because that’s how I could attract the attention of the world. For this reason, seeing her with joy at freedom and the dual feeling of getting my place back in Brazil. A Latin feeling of being president. American is delighted with Lula’s leadership in this area,” he contemplated.

Fernández said he has known Lula since 2002 and noted that his “huge distinction” is “leading authentic leaders” and “he never makes him feel that way” but “puts himself in the place of another terrorist”. “

The head of state recalled the actions taken to “unify the continent” with Mexico’s President Andrés Manuel López Obrador, but commented that “Brazil was missing because Bolsonaro denied the importance of CELAC”, from which Fernández Now the president.

Last night, after the results were made known, President Alberto Fernández congratulated Lula da Silva by telephone on his victory in the election, according to the Presidency’s spokesman, Gabriela Cerruti.

The president had already spoken by telephone with Brazil’s president-elect last Thursday, on the 77th birthday of the metallurgical worker and union leader, born in Pernambuco state in the northeast, and as a child on the outskirts of St. established in Paul, the same sources told Telam.