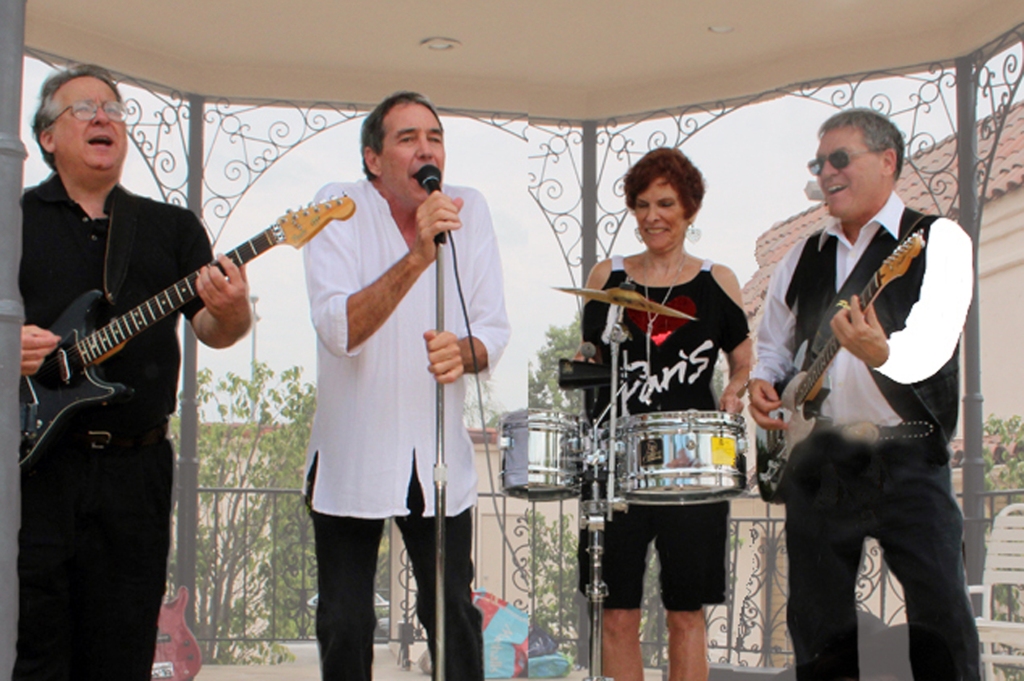 In 2010, The Village Midgets hit the first chords, and since then the rock band has grown and spread. One band, the Woods Combo, added a new element to classic rock standards.

In this first two-part article on rock music in the Village, we begin with The Village Midgets Band, which may have started it all.

I was on a show for the Theater Guild called “From Aquarius to Woodstock,” co-written by John Perak, Sheila Balka, and me. Most of the music was recorded, but I sang two Rolling Stones songs.

Several days later, Linda Nearing asked me if I’d like to be in a rock band because she knew two guitarists and dabbled in percussion. “Undoubted!” I answered, and The Village Midians were closing in and shaking.

We were The Midgets because we performed for MIDI files, kind of like a great karaoke. David Anderman, who is actually a rocket scientist, was our lead guitar player and arranger, and he provided the accompaniment. Bill Farinacchi played rhythm guitar, and we all sang.

After four years we added the incomparable Mark Hochberg and Pamela Weisneger on keyboards, who brought their amazing voice and creative imagination to the band. Mark and Pamela’s joining changed the dialogue from “You guys are getting better” to “You guys are really cool!”

We performed at the Clubhouse, the closing ceremony of the Village Games, the grand opening of Clubhouse 2, and Boomers Laguna Woodstock several times over the years.

Our last gig came in 2018. It happened where we opened our career, the gazebo in Clubhouse 1.

I never knew I could sing until I was 13 and we were asked to join our church choir. I realized how much joy there is in singing and I love wearing choir clothes.

25 years ago when I was in New York teaching high school English and theater. I performed musical theater with my students and then began acting and singing with our community theatre.

Fast forward to 2006 when my wife, Susan, and I moved to Laguna Woods so she could live with her mom.

In my golden years of retirement, I wanted to join theatre. But I never dreamed that life would prove to be so interesting.

Woods Combo, formed in 2017, is another band that has played at Laguna Woodstock. The combo brought a jazz and rhythm and blues twist to many rock and popular hits.

Drummer Bill Heimberger recently spoke about the creation of The Woods combo, and the names of Dutch Fischer and Mark Hochberg surfaced.

“Dutch, Mark and I were playing as a trio, and Moki Lund would accompany us and sing. When asked if she wanted to be a part of the band, her immediate answer was, ‘Yes!'”

Moki has lived his entire life with his music, he told me. He once sang jingles for several famous multinational corporations.

The highlight of his illustrious career was supporting Grammy-winning artist Dennis Williams. Traveling with Williams took Moki all over the world, and she was sometimes on the road for weeks.

I asked Bill and Mark if they wanted to make music a career.

Bill’s answer: “I wasn’t sure I wanted to be a professional musician. So after high school, following my father’s advice, I traveled with a band in New York. About a year after that, I Decided to go to college to study radio and broadcasting. It turned out to be a good decision.”

Mark, who started playing the piano at the age of 5, had a similar reaction. “I wanted a pension and all those other benefits that our parents expected of us, so as a morning person, a career as a professional keyboard player was not for me.”

Eventually, Dutch decided to take his music in a different direction and went on to focus on his own band, The Dutch of Fizz.

Fortunately, Alan Levine was available to play bass for The Woods combo. He comes from a musical family and has been a musician for most of his life. He is currently Professor Emeritus String Band Class. He especially loves to sing and play music with his son.

The Dutch of Fizz became involved in the development of the rock in the village in 2017.

Dutch Fischer is the band’s bass player. He was born in the Netherlands and moved to America at the age of 17. He was trained as an electrician and spent most of his life earning a living in the field. He grew tired of that line of work and became a flight-trainer pilot. The events of 9/11 slowed him down so he returned to work as an electrician.

I recently asked him, “Dutch, have you ever wanted to be a rock star?”

He replied: “I thought about it. When I was in fourth grade in Holland, my teacher Mr. Dongen asked me if I wanted to perform in front of the class, so I did. All the girls said that when you grow up you will have so many girls.

“How did that work out?” I asked

“Quite well. I’ve been playing music ever since.”

Fizz’s Dutch Boomers became regulars in the social, providing a great rock beat for the dancers.

There is a group of musicians in the village who know each other’s musical talent. So when Nomad needed a bass player, Dutch became a strong member of that band as well.

Rock of Ages, formed in 2017, became a favorite of the Boomers, playing in several Boomer acts, including Laguna Woodstock at various times. The band features Lyle Sanders on lead guitar and vocals.

Lyle’s musical skills are in high demand in the village. He plays in four bands: The Dutch of Fizz, Rock of Ages, Band X and The Nomads.

“I think no matter which band was chosen for Boomers Woodstock 2022, I will play,” he said.

I asked him how he felt about being in a band of four. “It keeps me very busy,” he said with a laugh.

In his pre-village days, Lyle served his community by delivering mail.

Ron Gagnon keeps Rock of Ages on time with his steady beat on drums. I asked him how he got started in music.

To my surprise, he said, “I used to play at bars when I was 15, and the idea of ​​rocking strippers was something I was used to, but I did.”

Ron’s favorite spot in the village is Clubhouse 5. Because of its size, it is great for dancing. He wanted to share how grateful he and the band are to the loyal followers of ROA fans: “We feel really good when we see all those guys dancing.”

Rock of Ages guitarist and vocalist Mark Hardy first held a guitar at the age of 10, when his neighbor taught him to play the C chord. As a teenager, Mark starred in a band that performed at the Pomona County Fair. Thirty-five years ago he played with a band called Foolish Pleasures.

I asked him how he got involved with Rock of Ages.

“I met Lyle with the OC Blues players,” he said. “We just clicked. A few months later, Ron called me and asked me to interview him for the opening guitar and vocals.

It turned out they were all “a great fit,” he said.

Mark especially enjoys playing in the village. “I love Laguna Woods. I love the audience, and I love rocking the boomers at Woodstock.”

Bass player Bob Mazzola, from Queens, New York, started playing music at the age of 16. While playing with the band Third Rail Connection at Queens College, he was offered a recording contract with Buddha Records.

It was a difficult decision, but Bob chose to stay in school, where he earned degrees in mathematics and radiology. However, he did not give up on music and continued to rock at every opportunity.

The latest rocker to join Rock of Ages is Jeff Sinclair. Jeff has sung with several bands in the village, beginning with The Dutch of Fizz.

What are some of his favorite songs to sing?

“Paint It Black” by the Rolling Stones and “Ain’t No Sunshine” by Bill Withers, he replied promptly.

Part 2 of Rock in the Village features The Retrofits Band, Band X and The Nomads.