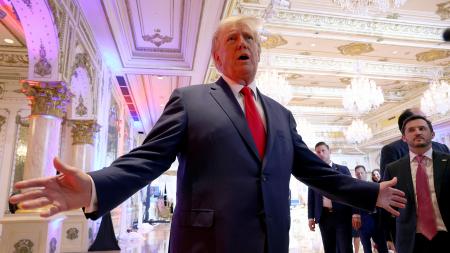 Some problems with voting machines and a notable absence in legislative elections this Tuesday added to pressure on Arizona electoral officials, who sought to reassure voters about the credibility of the electoral system, questioning two years of conspiracy theories. raised.

Tensions have risen in Arizona in recent weeksWhere Republican candidates insist on ignoring the outcome of the 2020 presidential election, in which Democrat Joe Biden defeated Donald Trump.

The tycoon contributed with a message on his truth social platform: “Is the same thing happening with the election fraud in 2020?”He asked himself to feed his insistent condemnations.

Americans went to the polls this Tuesday for the midterm electionsIn which the entire House of Representatives and one-third of the Senate are renewed and a number of governors and local offices are elected.

The certification is also usually a de facto referendum on the presidential administration.

In Georgia, where the battle for the Senate was at its peak, there were problems getting ballots, and in Texas there were long lines. Due to inconvenience in some voting machines.

and in Maricopa County – which includes Phoenix, the nation’s fifth city by number of residents, has a fifth of machines stopped working.

Maricopa was at the center of a Trump-led election outcome question after losing his bid for re-election in 2020.

“We have about 20% of the centers with incidents on the table,” said the head of the board of supervisorsBill Gates, who clarified that this does not affect the credibility of the process. In the afternoon, the Elections Department announced on Twitter that they had resolved the incidents.

President Joe Biden won Arizona in 2020 by a narrow margin of 10,000 votesAnd Maricopa was the key to his victory.

But in a rural area of ​​the state, which has voted Republican in the past, his victory has been questioned and has given rise to fraudulent conspiracy theories.

Based on repeated denunciations of Trump, Republican candidates for governor and Senate continue to insist on theories of fraud.

The US system allows for early voting, so ballots can be discarded at the time of the election or mailed weeks before the election.

In Arizona, masked men, some with weapons, haunted these ballot boxes for several days, claiming they were making sure the boxes were not filled with ballots., a situation in which some voters feel intimidated. A judge ordered him to stay away from polling stations.

Local officials stepped up efforts to reassure voters with regular meetings and invitations to citizens to inspect the electoral system on their own, but some Republicans used isolated incidents to return to fraud reporting.

Trump-backed gubernatorial candidate Kari Lake admitted she had no trouble voting, but criticized the events and even suggested they may have been intentional.

Trump turned to his Truth Social Network to report on what was happening in the county: “Reports are coming in from Arizona that the voting machines are not working properly, mainly in Republican/Conservative areas. “wrote.

“Can it be as true as if most Republicans waited today to vote? Again? People won’t shut up!!!” He added.

In Georgia, where Democratic Governor Raphael Warnock is running for re-election against Trump-backed former football player Herschelle Walker, county officials have reported an incident with the distribution of some ballots.

Of the more than a thousand affected voters, some decided to exercise their right in a different way and others would still have time to send ballots before the close of voting.

In Texas, in Harris County – the third most populous in the United States – voters were facing closed doors, long lines and some machines not working in many polling stations.The Washington Post reported.

The independent Vote.org organization said the results would not be affected by isolated incidents, although it noted that it had “reports of machines not working in different states”, said executive director Andrea Halley.