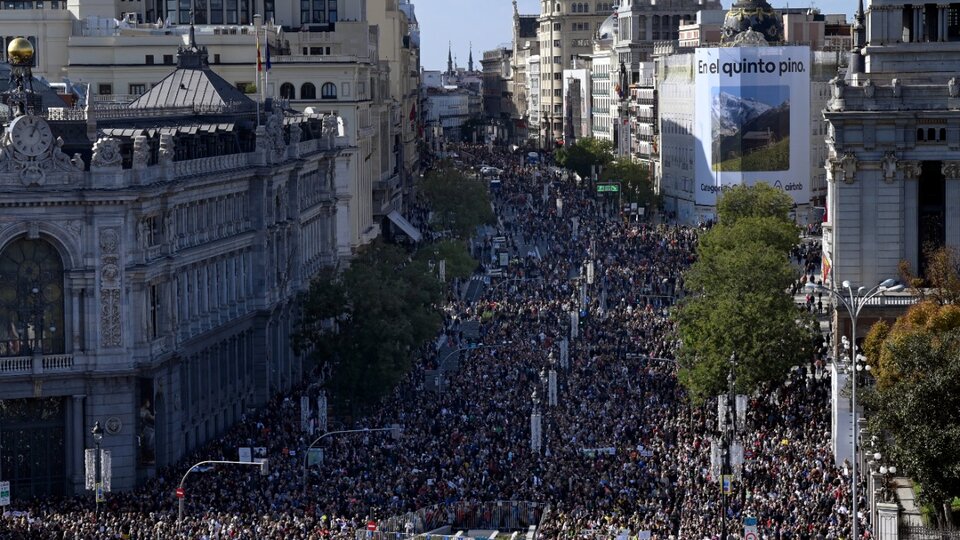 At least 200,000 people demonstrated in Madrid this Sunday to protest against the chaotic health situation and the policy of cutting public hospitals adopted by the regional government of the right wing Isabel Diaz Ayuso, The protest, backed by the central government of President Pedro Sánchez, comes shortly before a strike announced on 21 November by at least 5,000 doctors against “overworked workloads, endless lists of medical visits and insufficient time spent with their patients”. protested. ,

march in defense of “100% public, universal and quality healthcare” and against the health policy of the government of Díaz Ayuso (which despite being the richest community invests the least of all regional executive authorities) was called by unions and social groups and was One of the largest in recent years in the Spanish capital,

“Health for all, Your health shouldn’t depend on your wallet“can be read on one of the flags crossing the Spanish capital. Demonstrators marched towards the Madrid town hall from four different points in the city. A spokesman for the conservative regional government estimated the protesters at 200,000, while coordinators The number was increased to 670 thousand.

After reading a declaration stating the reasons for the call, a A minute’s silence in memory of those killed in the pandemic Madrid’s community “by approving death procedures that prevent residents of the residence from being taken to a public hospital,” according to the organization, which described these deaths as “murder.”

marciano sanchez belleA spokesman for the Federation of Associations for the Defense of Public Health spoke to the Público newspaper amid the human tide and assured: “they are a gang of incompetents in the community of madridsome fans who only want to implement their health-deteriorating strategyof privatisation, irrespective of the reasons”.

diaz ayusoOne of the emerging figures of the Popular Party (PP), which will win an absolute majority in the regional elections of Madrid in May 2021, announced that Seeks to promote video consultations and telemedicineIn addition to promoting the role of nurses to solve health problems in the richest region of Spain. According to unions, primary care in the Madrid region is under great pressure due to lack of resources and poor management,

“What they’re doing is an unprecedented disaster”Told monica garcia, from the leftist party MAS Madrid, referring to the health policy of the regional government. For its part, Unidas Podemos, an ally of the Sánchez government, said that this Sunday “change begins” in Madrid’s community. “Citizens’ Condemnation Resolution” for the adjustment policies of Diaz Ayuso.

The PP is the main opposition party to Sánchez’s national government, which Díaz Ayuso used to harshly criticize. presidential minister, Felix Bolañosassured that his government was “on the side of protesters demanding toilets and public health of the quality and prestige they have income.”

Bolaños criticized that “The Madrid region is the one that invests the least in healthcare per inhabitant: The national average is 1,700 euros per inhabitant, and in Madrid it is 1,300 euros and it is the autonomous community with the lowest number of doctors and nurses per inhabitant”.

By-elections in Tiverton and Honiton: Rural communities yearn to vote in protest