Maduro at the swearing-in of PSUV bases: let’s move on to the adding phase 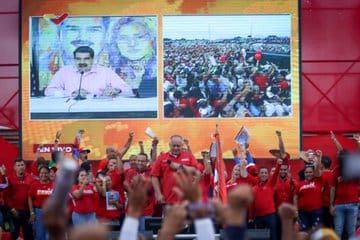 He sent a message to the militancy that was in the CTE Kachame and described the act as “beautiful”.

The swearing-in of United Socialist Party of Venezuela (PSUV) bases in Portugal and Bolivar began this Thursday, for which Nicolas Maduro, the president of the red canopy, called on the militants to follow and follow the management manual politics. ,

Through an act in Portuguesa, one of his “work offices”, in which the first vice president of PSUV, Diosado Cabello was present, Maduro also pointed out that “we are now going to the stage of connecting, organizing, uniting all that.” Which can be united by the country, socialism, the Bolivarian revolution.

He considered that the manual given to each leader of the streets, the community and the Bolivar-Chávez War Units (UBCH) was “very useful for political organizations in the world, brothers, allies, friends as well”.

Since with them they are going to “build a new political culture in Venezuela, based on morality, solidarity, sacrifice, struggle, based on Bolivarianism, based on deep, popular street Chavism,”

Another demand of the insurgency was “to direct, guide and accompany the socialist management through a 1×10 of good government”, as well as “preparing for the great electoral victory for 2024–2025 against the enemies”.

As well as “being a party and social mechanism to protect our people and to reclaim the social welfare state.”

Although he did a split screen with Bolivar in the broadcast, he did not form a link. What he described in the CTE Kachame as only a “beautiful” act focused on the unit’s PSUV supporters.

Willie Garson dies at 57; Actor best known for role in ‘Sex and the City’