Manchester United is sinking: with Cristiano Ronaldo, he lost 1-0 to Everton for the 32nd date of the Premier League 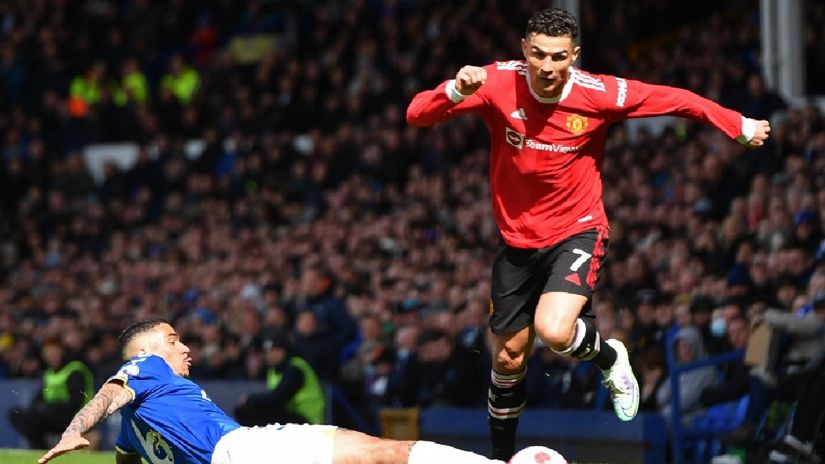 Ni al Everton, one of the worst teams in the Premier League, was able to win Manchester United. The ‘Toffees’ catch their breath in the race for salvation at the cost of a team in ruins that, not even with the return of Cristiano Ronaldo, were able to raise their heads and fell 1-0.

A goal from Anthony Gordon was enough to bring down the Manchester Unitedwhich has won one of its last five games and it seems unthinkable that next season will be in the Champions League.

The storming out of the ‘Red Devils’ spurred on by a Cristiano who missed the last Premier League game due to illness, was not enough. Marcus Rashford had two very good chances in the first fifteen minutes, but Jordan Pickford was perfect, with two saves that spelled the grave for Manchester United.

In the first one that Frank Lampard’s men had, the goal came. A ball bounced off the edge that young Gordon hooked, touched a defender and changed David de Gea’s trajectory. The ball went into the goal and the three points would stay at Goodison Park.

United tried in the second half, with Bruno Fernandes, Cristiano, Jadon Sancho and Paul Pogba charging their attacks on Pickford’s goal. There was no way. The second was even closer to the Evertonbut De Gea, once again, prevented the misfortune from being greater.

Pickford, in injury time, avoided the 1-1 with a save to Cristiano Ronaldo. In addition, United lost Fred to injury, who had to leave with a muscle problem half an hour into the game.

With this result, Manchester United is seventh, with 51 points, three behind the Champions League, but with one game more than Tottenham Hotspur. Ralf Rangnick’s men have seven games left to try to enter the top continental competition.

Everton, who had just lost a direct duel against Burnley, increased their lead to four points with relegation, although they have one more game than the ‘Clarets’.

While the Premier League awaits the duel that could define the title of the season between Liverpool and City, the other Manchester team, the Unitedalso faces finals in the final stretch of the course, but with the goal of re-enlisting in the European positions.

The ‘Red Devils’ could not last day against Leicester City at home and fell to seventh place (51 points) in the Premier League. They are currently out of Champions League, the Europa League and even the Conference League. To avoid what would be calamitous, Manchester United It is obliged to win everything, because it even has one more game than Arsenal (5th 54 points), the team with the most matches ahead.

Cristiano Ronaldo overcame his flu process and will return to the starting team. ‘CR7’ has 12 goals and 3 assists in the Premier and his squad needs him to avoid being left out of everything.

On your side, Everton they have won just one of their last five meetings in the tournament and are barely a point above the relegation zone. The ‘toffees’ already stopped United in the first round when they tied at Old Trafford.

Manchester United vs. Everton: match times in the world

The Single National Health Information Repository (Reunis) changed the way of presenting the information, regarding the doses of vaccine against COVID-19 applied daily.