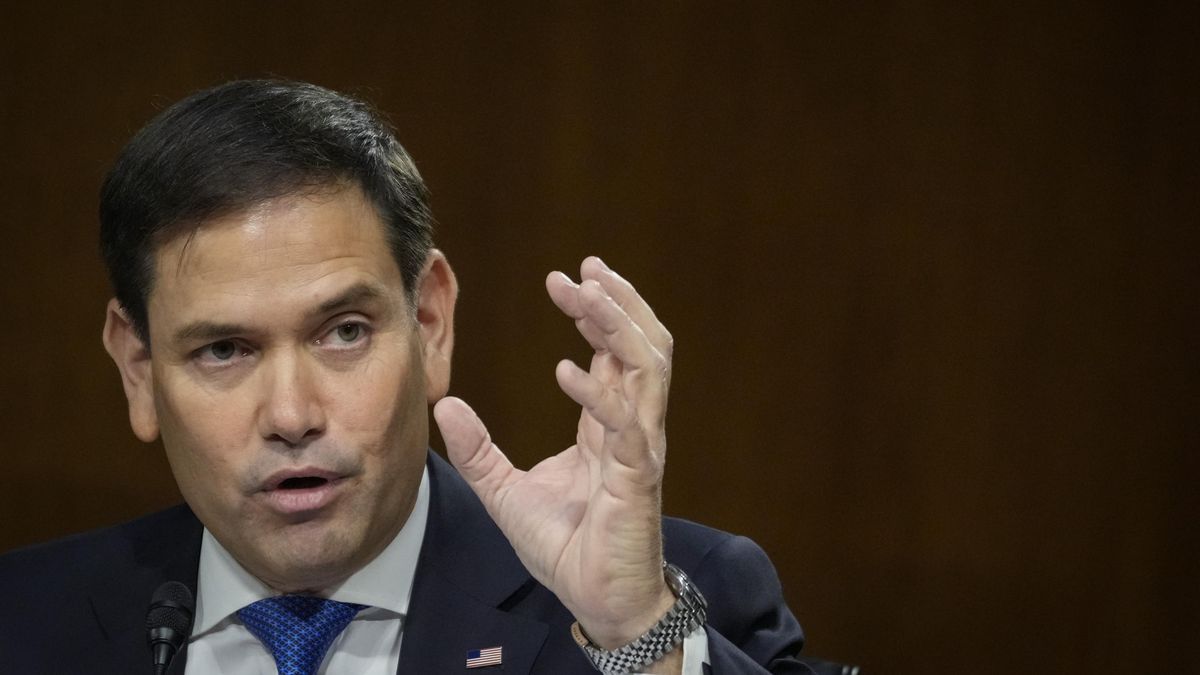 In October 2002, he was sentenced to 25 years or 300 months in prison for conspiracy to spy for the Cuban regime.

Senator Marco Rubio, in an interview with the Pitchie Boys, said: “Here in January a woman named Ana Belen Montes, the spy who did the most damage to this country in many years, is going to be freed. She’s going to be freed from US defense intelligence. The agency in charge of the Cuba issue. They called her the Queen of Cuba, she was a spy. She was the one who was giving all the details to the Cuban government when they shot down the brothers in rescue planes.

Rubio said: “I’m the vice chairman of the Senate Intelligence Committee, those who are in that area understand it very well, Cuban intelligence is one of the best in the world. They don’t have the electronic capability of the Chinese, the Russians, but infiltration With what the human ability to do, spy, and divestment agents, they are the best in the world and have done it over the years. Ana Belen Montoya wasn’t even Cuban. They met her when she was 20 and in university was studying. They never gave her a penny. Whatever she did, she did it only out of sympathy. But [la dictadura] He has taken away a bunch of people here. We also talk about Bridges of Love, they are the agents who send them here to divide, create conflict, create chaos.”

The senator said: “Then I accused Puentes de Amor of being an agent. I asked the FBI to investigate him and the person in charge of that group answered me from Havana. The day he answered me, he was in Havana Carlos Lasso replied from Havana, “What I was saying was a lie. Look, you’re in Havana. He’s not James Bond, they’re the people who send him here with the agenda of creating division. Even That he also met that Emily Mendrala last year on July 20. He presented her some documents, they took pictures together, smiling and everything else, anyway. So they take advantage of it and we don’t know That how many people they have sent here because they are not going to send it by plane anymore. How many of them they have sent here for this purpose? This guy from Wasp network got married and all”

Rubio insisted: “Cuba is an ally of Russia, an ally of China, an ally of Iran and Venezuela. So what happens is that Cuba’s number one interest is to influence US policy towards Cuba. But if the Russians or the Chinese Ask you, hey, do you have the capacity, can you help us with this? They do it because they are paid or because they are interested in people sending them money. So this country In the U.S. there have been cases of espionage and Cuban attempts to create divisions and conflicts in social networks. Now they are devoted to that as well and sometimes they are doing it in favor of other governments, other countries who have done it for this. where or paying them or giving them some benefit in return. People here don’t know, but both the Chinese and the Russians have electronic systems on the island to monitor communications in the US which also helps them, Cubans. They also use it against us. So there’s a danger that it’s not just about Cuba, but that It is a bridge they use to help their allies, our enemies. It’s hard to explain to people outside of Miami.”

In his speech he concluded: “If someone is an agent of a foreign government and has not declared himself, for example, what he has, he cannot be arrested. It is therefore necessary to verify that they are agents.” and get address [de un gobierno extranjero], but it should be condemned so that people know that these people that you sometimes see in the articles they write in national publications and say ‘he is an expert on the subject of Cuba’. He is not an expert on the Cuban issue, he is a Cuban agent seeking a position at a university that seeks to voice his opinion on these issues and use it to create division. In other cases they settle. Look, a month ago those people from Puentes de Amor met, I don’t know, in Coral Gables, and more than half the people who weren’t in Cuba. They were a whole network of Marxist socialists who meet and are in favor of these issues. And they were there to provoke. Incite violence, instigate something that damages the image of the Cuban exile. But the first thing is to recognize the danger. And the second is to identify these persons who are responsible for this or have links with the regime and who are now looking to stay here and drive them out of the country. And if they are agents and they are doing activities, then people should be aware of it.”

Meanwhile, in Miami, federal judge Alberto Milian has thoroughly studied the judicial process of Belén Montes, who would have been imprisoned for 20 years when his release was finalized in January.

“Frankly, he deserved the sentence of life or death in prison, because that is the man who deserves such betrayal in the United States,” said Milian, who held the rank of captain in military counterintelligence in the US Army. Arrive.

Belén Montes pleaded guilty, there was no jury trial, and in Milian’s opinion, he is responsible for the death of a US special troops soldier who was providing military advice in El Salvador. It was in 1987, when guerrillas attacked a Salvadoran army camp and caused many casualties. “He gave that information (the location of the camp) to Fidel Castro, to his teacher. In many cases of espionage, there are compromises, first because the traitor cooperated and distributed the reports that he gave to the enemy, which is probably why he was not sentenced to death,” said Million, who Belen doesn’t hesitate to reassure him. Montes caused great damage to the country.

He also recalled the cases of Robert Hansen, who was an FBI agent, or Aldrich Ames, a CIA officer who was sentenced to life imprisonment and “thanks to justice they are going to die in prison,” former prosecutor. he said.

Belén Montes betrayed not only his country but also his sister and brother who worked for the FBI.

“Self-love was stronger than that. Supposedly because he was narcissistic, he was proud to have served Fidel Castro and the Cuban Revolution. What an irony!” exclaimed Million.

In the trial, the prosecutor’s office presented overwhelming evidence, a short wave radio and numerical codes that he used to transmit information and not just those with Cuba. “When America planned its response to the Taliban and Al Qaeda. After the September 9, 2001 attacks on the Twin Towers in New York, officials feared that Belén Montes was going to pass that information to Castro, as others Among other things, Cuba benefits from intelligence work and sells information to North Korea, Iran to all enemies of democracy and therefore the FBI at that time had probable cause to justify his arrest,” he recalled. .

The “Queen of Cuba” was arrested 9 days after the attacks against the Twin Towers (“The World Trade Center”). In his case, the hearing was public and he had legal representation from veteran lawyer Plato Kacheris, who died in 2019.

“He accepted his guilt, he committed contempt of court, because until the very last moment he said he was doing so because of the injustice that the United States had done to Latin America by knowing his psychology and the depth of his file. I can say that he is a very self-aware person; this is what the intelligence services of the former Soviet Union, the KGB, the services of Putin and Fidel Castro were looking for.”

Castro is said to have never been interested in exchanging his personal spy, as what is understood was not an agent, Castro was not an Intelligence Directorate officer as he was one of the five spies of the Wasp Network. Were.

“Ana Belén Montes was a very useful informant to Cuba, but not an agent. Furthermore, the damage done to the United States was so severe that the DIA and CIA opposed the exchange,” commented Million.

With prisoner number 25037-016, Belen Montes is being held at Carswell Federal Prison and Women’s Medical Center in Fort Worth, Texas.

The facility houses prisoners at all security levels with medical needs and mental health issues. Family sources have told that the detective was suffering from breast cancer.

In Puerto Rico and in many cities in the United States, Latin America and Europe, there are groups that promote their independence and who view their imprisonment as unjust, such as La Mesa de Trabajo by Ana Belen Montes and Cuba by Ana Belen. .

“We’re not interviewing right now,” Miriam Montes-Mock, a cousin of her father’s who lives in Puerto Rico, replied to radio television Marty.

These days, former FBI agent Peter Lapp, one of the agents who arrested Belen Montes, is in Miami promoting his book “Queen of Cuba,” which will go on sale in January after the release of Detective. With him on tour are co-writers and journalists Kelly Kennedy and Chris Simmons, a former DIA analyst and colonel who participated in the informant’s interrogation.

Once the charges are paid, Ana Belén Montes will have the right to social reintegration, a process aimed at promoting integration into society of a person who has been convicted of breaking criminal law.

“I hope he goes to live in Cuba. I don’t want him in the United States, I don’t want to share the freedom and oxygen we get with a traitor. If there’s a special place in hell, So it is for people like him”, concluded Judge Alberto Milian.