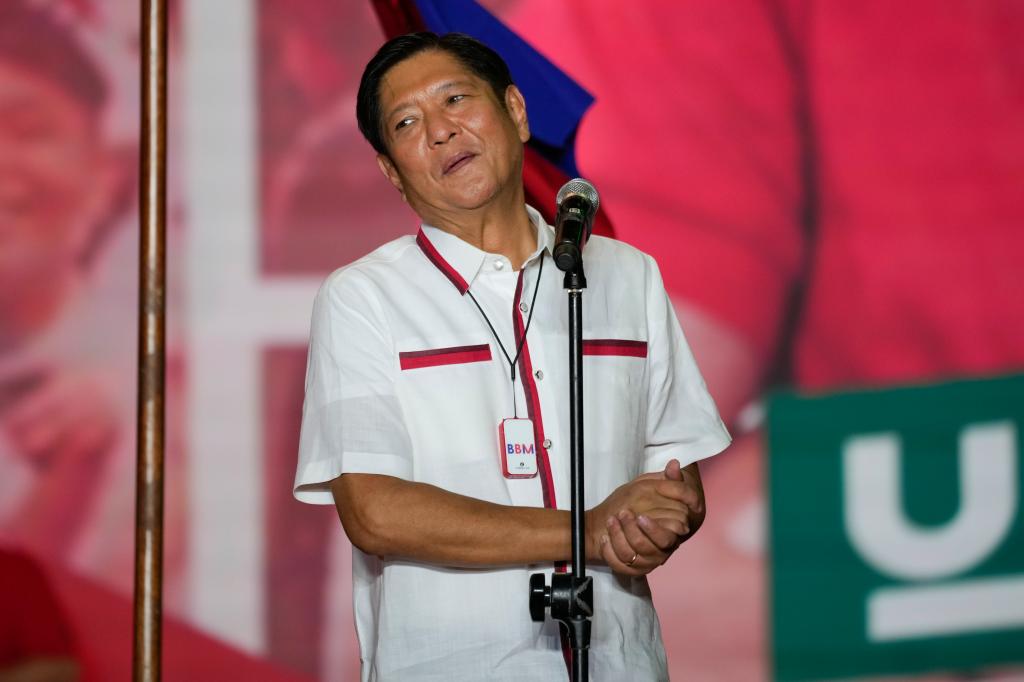 The son of the late Philippine dictator Ferdinand Marcos was elected president of the Philippines by a landslide in a surprise reversal of the 1986 “People Power” pro-democracy uprising that ousted his father.

In unofficial results Marcos Jr. received more than 30.8 million votes, with more than 97% of the votes being tabulated as of Tuesday afternoon. His closest rival, a champion of human rights, Vice President Lenny Robredo, received 14.7 million votes in Monday’s election, and boxing great Manny Pacquiao got the third-largest vote with 3.5 million.

His running mate, Sarah Duterte, the daughter of the outgoing leader and mayor of the southern Davao city, had an impressive lead in the separate vice presidential race.

The coalition of descendants of the two authoritarian leaders combined the voting power of their families’ political strongholds in the north and south, but raised concerns from human rights activists.

Dozens of anti-Marcos protesters rallied on the Election Commission, blaming the agency for the breakdown of vote-counting machines and other issues that prevented people from casting their votes. Election officials said the impact of the malfunctioning machines was minimal.

A group of activists, who suffered under the dictatorship, said it was outraged by Marcos’ apparent victory and would oppose it.

“A potential victory based on a campaign based on open lies, historical distortions and collective deceit is tantamount to betraying your path to victory,” said the Campaign Group Against the Return of the Marcos and Martial Law. “this is not acceptable.”

Former Human Rights Commission chair Etta Rosales, who was twice arrested and tortured under martial law in the 1970s, said Marcos Jr.’s clear victory brought her to tears but didn’t stop her from relentless efforts to hold Marcos accountable. ,

“I am one of many who have been persecuted; Others were killed, I was raped. We suffered in the fight for justice and freedom under the Marcos regime and it happens,” Rosales said.

Marcos Jr. and Sarah Duterte avoided volatile issues during their campaign and instead clinging to the fight for national unity, even though their father’s presidency opened up some of the most turbulent divisions in the country’s history.

Marcos Jr. has not claimed victory but thanked his supporters in a late night “address to the nation” video, where he urged them to remain vigilant until the counting of votes was completed.

Robredo has not given up but acknowledged Marcos Jr.’s massive lead on the unofficial count. He told his supporters that the fight for reforms and democracy would not end with elections.

“The voice of the people is getting clearer and clearer. “In the name of the Philippines, which I know you love dearly, we must hear this voice because in the end, we have only one country to share.”

He asked his supporters to stand up: “Press up for the truth. It took a long time for the falsehood to build up. We have time and opportunity now to fight this and put an end to it.”

The election winner will take office on June 30 for a single, six-year term, two years as leader of a Southeast Asian nation amid the COVID-19 outbreak and lockdown and crushing poverty, eliminating inequalities, Muslim and Long troubled by communist extremism and deep political divisions.

The next president will also face demands to prosecute incumbent President Rodrigo Duterte for thousands of murders during the anti-drug crackdown – deaths already under investigation by the International Criminal Court.

Amnesty International said it was deeply concerned about Marcos Jr.’ and Sarah Duterte refraining from discussing human rights violations in the Philippines, past and present. “If ratified, the Marcos Jr administration will face a wide range of immediate human rights challenges,” the rights group said in a statement on Tuesday.

Human Rights Watch also called on Marcos Jr., if he takes office, to improve the human rights situation in the Philippines.

Phil Robertson, the group’s deputy director, said, “They must declare an end to the ‘war on drugs’ that has resulted in the extrajudicial killings of thousands of Filipinos, and order a fair investigation and proper prosecution of the officials responsible for these unlawful killings.” Should give.” for Asia.

The 64-year-old former provincial governor, congressman and senator Marcos Jr. has defended his father’s legacy by refusing to admit and apologize for the massive human rights violations and looting under his father’s strong rule.

After his expulsion from the largely peaceful 1986 uprising, the elder Marcos died in 1989 while in exile in Hawaii without admitting any wrongdoing, which alleged that he, his family and comrades had taken power. Earned an estimated $5 billion to $10 billion while living in the U.S. A Hawaii court later found him liable for human rights violations and awarded $2 billion from his assets to compensate more than 9,000 Filipinos who sued him for torture, imprisonment, additional murders and disappearances. did.

His widow, Imelda Marcos, and their children were allowed to return to the Philippines in 1991 and embarked on a surprise political comeback, helped by a well-funded social media campaign to renew the family name.

Hidden Wounds of the Civil War | The Biblio File