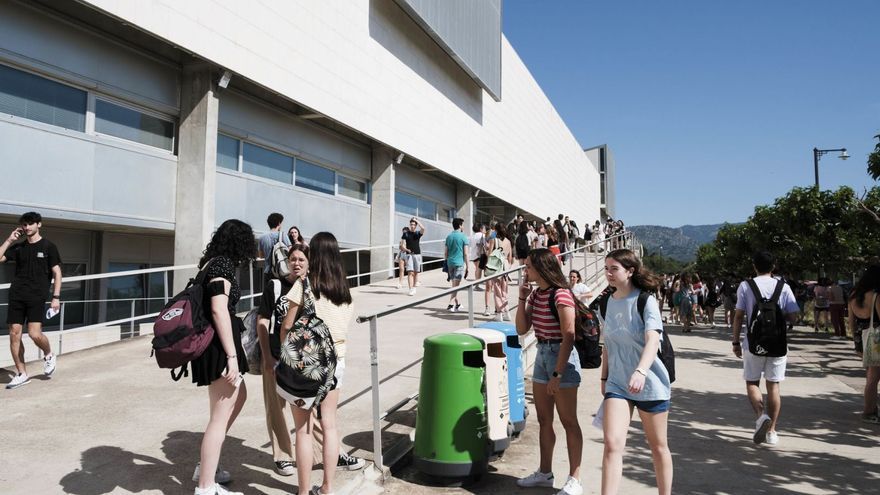 Science career as a degree with the highest cut-off marks remains unbeatable. Medicine, biochemistry and nursing are ranked, in that order, as the most requested universities in the Balearic Islands (uib,,

The cut-off grade determines who will be able to enter one grade or another. It is the merit of the PBAU tests (old selectivity) obtained by the last student who has been successful in entering the career. In particular, and taking into account that the selectivity is evaluated at 14 points, The last aspiring doctor has agreed to race with 13,192; Highest cut-off grade of the entire Balearic University. It is followed by Biochemistry with 12,243 and Nursing with 12,138.

This can be confirmed in the first list published by UIB yesterday. However, it should be remembered that neither this nor the latter will be fixed, as during the remainder of July and the whole of September More lists will appear which will revise the cut-off notes at the bottom to access the study.

For each published list, a new enrollment period will be opened for accepted students. Thus, those who have been on the waiting list in the firstThey will be able to enter the following lists of admitted students in order of grades from best to worst. This is because, usually, some admitted students do not complete the registration. For example, to get a place in another university that interests them more. The places which have been released are filled by the following students in the list.

For example, There are 2,185 students waiting in medicine, 446 in biochemistry and another 1,537 in nursing. Since these three lead the most requested rankings with respect to number of places (there are 60 places for over 2,000 students in medicine), they have the highest cut-off marks. In fact, the first place in this same ranking is dominated by science and technology careers: Dual degree in Dentistry (11,938), Physics (11,836), Mathematics and Telematics (11,316) or Biology (10,978) They are also the most requested. Double degrees in business administration and law are the only strangers to top positions.

other side, A major part of degrees with minimum cut-off marks are from humanities or social sciences. For example, to enter a degree in History, Art History, Philosophy, Geography, Catalan Language and Literature or Spanish Language and Literature, getting five on the PBAU tests is sufficient. None of these students are on the waiting list.

The only philology with the cut-off mark is English, which has ranked itself in the first list with 7,814 and 86 students. The second most requested degree in the Faculty of Philosophy and Letters Social work, with 7,224 and a total of 156 students, who have been dropped at the entrance.

On the other hand, this first list draws attention to the number of grades who have increased their cut-off grades as compared to the previous year. Higher grades are required for about 30 degrees, while those lowering the level of demand are less than 20. In this last group, it’s okay degree in Spanish language and literature, which has gone up to five on the same list from 9,704 in the first cut-off mark in 2021 this year.

Only eight grades maintain the same grades as the previous year, with all five. and the other four careers will be taught in this course for the first time: three Dual degree of infant and primary education which will be taught in Mallorca (with a cut-off score of 10.162 marks), Evisa (7.032) and Menorca (7.25), and Fine arts In Adema University School, which got 8,744 marks in this first list.