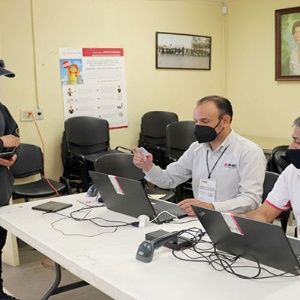 The National Electoral Institute (INE) of Mexico announced this Sunday the closure of all electoral centers after the presidential recall day that took place in the country in total tranquility.

According to the electoral authorities, a total of 57,436 voting booths were available for this election day, where Mexicans will decide whether the current president, Andrés Manuel López Obrador, should continue in government.

At the same time, the INE explained that in a few minutes the subsequent calculation and results of the recall process will begin. It should be remembered that in Baja California there are minutes left to close centers.

It should be noted that during the day, the authorities highlighted the peaceful sense of Mexicans when exercising their right to vote, for this Sunday less than half of the voting booths were available due to differences between the electoral and federal authorities.

This democratic exercise is recorded for the first time after the constitutional reform, where figures such as the revocation of mandate were included in the Magna Carta.

While the Mexican government urged the National Electoral Institute (INE) to install the corresponding electoral centers, the electoral authorities indicated that due to lack of budget they could not fulfill such a task, in the framework of ideological controversies between both parties.

However, citizens must decide whether to revoke the presidential mandate of the current head of state, Andrés Manuel López Obrador, or whether to complete his six-year term at the head of the nation.

We participate in the historic democratic exercise that is taking place today throughout the country.

Democracy must be a way of life, a habit of Mexicans so that no one feels absolute. The people are the ones who rule. pic.twitter.com/0JbJrNPXn0


The Mexican president went to his corresponding center where he wrote on the ballot: Long live Zapata! (alluding to the death anniversary of the revolutionary hero), as he announced days before, when he specified that he would not vote in the referendum.

López Obrador called on citizens to participate in the process, since he assured that “democracy is a way of life” and reiterated that “the people contribute and the people remove.”

In the first hours, long lines were observed in the voting centers of Mexico City and in some states of the country, while in others the opening of the polls was delayed, while the decrease in tables to cast the vote in this referendum has been participation factor.

This Sunday’s day began with a ceremony to honor the national flag, held in the early hours, the head of the National Electoral Institute (INE), Lorenzo Córdova, said that so far the organization of the consultation has been a success.

He added that “citizens once again accepted to participate in the boards of polling stations, even more quickly than in other elective processes and with percentages that we had not seen before.”

Under the premise that “the people rule; the people put and the people take away ”, López Obrador raised the idea of ​​this consultation, which becomes an evaluation of his management, since his electoral campaign.

Consultations with the people on core issues of government management are part of the 4T and of AMLO’s work at the head of the State, and the figure of the referendum was approved by Congress and incorporated into the Constitution in 2019.

We seek to establish democracy as a way of life. Morning press conference, from the National Palace https://t.co/DOxyrflmFi

Question of the current consultation

Voters receive a ballot that asks them the following question: “Do you agree that Andrés Manuel López Obrador, President of the United Mexican States, have his mandate revoked due to loss of confidence or continue in the Presidency of the Republic? Until your period is over?

This places them before two possible answers: that the mandate be revoked due to loss of confidence, or that they continue in the Presidency of the Republic.

The INE ordered the authorization of 57,517 voting booths in the 32 federal entities of the country, which operate between the hours of 08:00 and 18:00 local time.

Of these, 300 are of a special type and allow people in transit to vote, far from their usual electoral districts.

To vote, citizens need to be registered on the electoral lists, not have their political rights suspended, and go to vote through the polling station assigned to them by the INE.

Media outlets announced that more than 17,000 Mexicans residing abroad have registered to participate, which they can do through the Internet Electronic Voting System.

A total of 287,000 citizens got ready to receive and count the vote in the polls, while about 4,400 people will be observers of the day, including 98 foreign visitors accredited by the INE.

After the closing of the polls, the electoral material will be taken to the 300 District Councils of the INE, where the votes will begin to be counted.

Likewise, the electoral authority plans to activate a quick count system, which will offer an estimate of citizen participation from a sample of 1,800 polling stations.

According to the INE, the results of the quick count could be published as of 9:00 p.m. local time, during a session of the Institute’s General Council, while the final results will be announced this Monday, April 11.

According to the regulations, for the vote to be valid and binding, the participation of at least 40 percent of the voters is required, that is, 37.1 million votes.

Surveys conducted in recent weeks give AMLO popularity levels that fluctuate between 58 and 60 percent, even higher.

However, the president assured that he will leave his work at the head of the Executive if the majority of those who participate, even if it does not reach 40 percent, decide to revoke it.

At the center of the controversy

The Mexican government asked the INE to install 160,000 voting booths, as established by federal law on the matter, so that they accommodate a smaller number of citizens and promote popular participation in the consultation.

However, the electoral authority only enabled 35.9 percent of this figure for this day and claimed that it does not have a budget.

Local media announced that, for example, there will be no voting booths in the town of Tepetitán, in the state of Tabasco (south), where López Obrador was born, whose inhabitants will have to move to other locations to pay.

On several occasions, AMLO reminded the INE directors and officials that the State works rationally in its expenses and that this authority can do more if it restructures its budget and eliminates privileges that they enjoy.

On the other hand, the Executive and the ruling party, the National Renewal Movement (Morena), drew attention to the fact that the INE installed a similar number of polling stations in this referendum to the one used in August 2021, which they organized at a lower cost. to the one requested for the current one.