Mexico to host dialogue round between Colombia and ELN 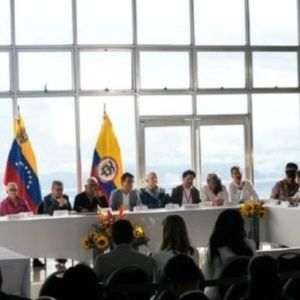 Mexico will be the host country for the second round of talks between the government and the National Liberation Army (ELN), which completed the first cycle this Monday in Caracas, Venezuela, after 21 days of talks that will resume next January.

They condemn the assassination of 89 Colombian social leaders in 2022

The Mexican ambassador to Venezuela, Leopoldo de Guevas, reported that his country had “accepted with great pleasure and responsibility” the request made by the High Commissioner for Peace.

The diplomat indicated that the proposed dates are being analyzed, as well as “necessary requirements and logistical aspects so that the said round can be carried out under the best conditions and guarantees.”

A round of dialogue between the National Liberation Army (ELN) and the Colombian government concluded in Caracas, Venezuela. They announce a new cycle that will take place in Mexico. All information pp @teleSURtv pic.twitter.com/TX1J4JniDc


On behalf of the guarantor countries, Norway reported that since 7 August to date, the ELN has released 20 people, including civilians and members of public forces.

Similarly, the delegations’ representations highlight the respectful, transparent and cordial atmosphere experienced in this round of dialogues.

Likewise, the parties agreed to create an emergency channel as a result of violent incidents that have occurred in recent days, especially in the Kaka Department.

“The parties recognize the grave situation of violence in the region and decide to implement a partial agreement for emergency care starting in January 2023,” the spokesperson said.

Meanwhile, the Venezuelan government expressed that it would always be ready for any initiative that would contribute to achieving the long-awaited peace in Colombia.

As reported over the weekend, the Catholic Church will participate in the dialogue table, to which other governments such as the United States will also be invited.

Likewise, it is anticipated that with the resumption of talks, other countries will be involved, including Germany, Spain and Switzerland as “partners of the process”, or Chile and Mexico, as “guarantors”.

It is with great hope that we receive the approval of the Catholic Church to be a permanent partner in the peace talks between the Government of Colombia and the ELN. pic.twitter.com/GO5ygLktBg


For the rebel group, one of its negotiators, Israel Ramírez Pineda, led the talks, which began in Caracas on 21 November, with both delegations aiming to reach agreement on “basic and urgent issues” soon, Others later “more structural” to make way.

On the other hand, the Catholic Church has already confirmed that it will be a permanent accompanist of the dialogues announced on Sunday by the Office of the High Commissioner for Peace (OACP).

The President of the Episcopal Conference, Luis José Rueda, said in a statement that “the Episcopal Conference receives with gratitude and responsibility the invitation to participate in its capacity as permanent partner at the dialogue table through the representation of the great Monsignor Héctor Fabio Henao.” Occurs. Captured by the National Secretariat of the Social Pastoral)”.

Orsted stands up to Iberdrola in Australia and bids for CWP