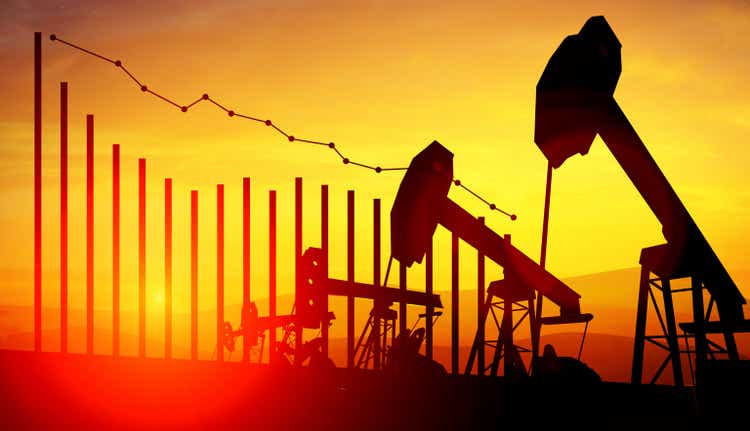 Midstream posted a flat week as (XLE) fell 3.3% and (XOP) fell 2.1%. Midstream also outperformed the S&P 500 (SPY), which declined later. Headline CPI information Inflation released on Wednesday showed inflation rose 9.1% from year-ago levels to a 41-year high. Markets became concerned that the data would cause the Fed to raise interest rates significantly and shock the economy, even if inflation peaked.

For Midstream and other energy equities, the big development of the week was the continued decline in oil prices, which posted their second straight week of declines and closed below $100 a barrel for the first time since early April.

A major contributor to the fall in crude oil prices during the week related to rising COVID-19 cases across the world. China reported 432 new Covid-19 infections, the highest in seven weeks, which led to concerns about more restrictions. Nearly 30 million Chinese are already in lockdown as the country pursues a “zero COVID” policy which we believe will ultimately end in failure. The lockdown has slashed China’s crude oil demand to 8.75 million bpd, the lowest in four years.

On Wednesday, Tokyo raised its COVID alert to its highest level after reporting 16,878 new infections, a 400% increase since July 1. The seven-day moving average of new infections in the US also rose to a six-week high on Thursday. ,

The other bearish event was a dramatic increase in US inventory and terrible demand data, which we didn’t use here.

With crude falling, it was easy to miss the week’s bullish data. For one, the physical market was strong. Forty and Nigerian crude saw unusual strength, refining margins remained high, and crude oil actually extended ahead amid a fall in month prices.

Political conflicts in Libya threatened to curtail the country’s crude oil production, further compounding the supply crisis. Crude oil exports from Libya fell to a 20-month low of 610,000 million bpd. Conflict during the week could lower that figure even further.

Concerns also spread during the week that Russia could increasingly use energy as a weapon against the West. Russia is heavily encouraged to keep oil prices high, and we wouldn’t be surprised to see Putin resort to extreme measures to do so.

It is clear to us that bearish variables are temporary, but bullish ones are likely to last longer. Oil prices remain in the neighborhood of $100 a barrel, even though China is not fully open. Higher prices may have affected demand, but supply has not reacted sharply. Assuming China gains economic momentum later in the year, what is now a tight physical oil market will tighten even further once the US Strategic Petroleum Reserve stops being issued. At some point, prices are bound to react at a higher rate.

With our bullish medium and long term commodity price outlook, we continue to maintain a heavy weightage in midstream equities with commodity exposure. We believe the recent weakness in energy equities is an opportunity for investors to choose from our preferred G&PS and mineral/royalty interest owners, such as EnLink Midstream (ENLC), Targa Resources (TRGP), Kinetic (KNTK), Plains All American (KNTK). PAA), and Black Stone Minerals (BSM).

Our portfolio underperformed our benchmark, the Alerian MLP Index (AMLP), by 0.1% during the week.

In an otherwise mild news week, falling prices for crude oil and energy equities dragged down our commodity-exposed midstream holdings. Again, we believe the drop in prices is a great opportunity to buy high-quality names that have been beaten to extremely low levels.

Magellan Midstream (MMP) was our top performer during the week. On Friday, the company extended its open season on its Houston-to-El Paso pipeline expansion. The MMP previously offered an open sea extension from 15 July to 24 July, but pointed out that potential shippers had expressed sufficient interest to warrant further extension so that commitments could be finalized. The pipeline expansion would increase a section of the Houston-to-El Paso pipeline by 15,000 bpd.

Cheniere Energy (LNG) was our worst performer because of fears that the company is in the crosshairs of regulators over air pollution. Chenier’s Corpus Christi and Sabine Pass liquefaction plants use 62 high-emissions combustion turbines that drive compressors responsible for super-chilling natural gas to move it as a liquid. The EPA is ordering that companies using these turbines reduce their emissions to meet regulatory limits.

Chenier pushed back by warning of consequences for Europe’s energy markets if its liquefaction facilities were shut down. In addition to Cheniere, Williams (WMB), TC Energy (TRP), Duke Energy (DUK), and NextEra Energy (NEE) are also backing out against the rules. We believe the concerns are overwhelming and Chenier is unlikely to face serious disruption in operations. The 180-day timetable set by the EPA for violators is unrealistically short, and we expect the agency to extend it. It is more likely that enforcement is delayed, which will allow Chenier to continue operating as it takes compliance measures.

news of the week

July 13. Tellurian (Tel) announced the acquisition of EnSight IV Energy Partners in the Haynesville Shell for $125 million in cash. EnSight has an acreage of 100% natural gas and produces 45 MMcf/d. Tel has long sought an E&P deal to secure reserves of natural gas to support its Driftwood LNG facility. As of March 31, TELL had $296 million in cash on its balance sheet, so the deal will not affect its liquidity. However, the company has yet to receive financing for Driftwood. Until this happens, the shares remain high-risk, and we recommend that investors avoid them.

July 13, The Kinder Morgan (KMI) Tennessee gas pipeline exploded prompting the company to announce a force majeure event on natural gas supplies in Pennsylvania and Alabama. The pipeline is one of KMI’s crown jewel assets, and the explosion is another example of damage to natural gas infrastructure for which no cause has been identified. This event will not have any material impact on the results of KMI. Shares of KMI have fallen 17% from their recent highs. Shares with a safe return of 6.7% are attractive at current levels.

We are amazed that the powers that be are advancing this climate agenda, despite the disastrous consequences of doing so, which are on display in Europe. Europe’s lessons about the risks of pursuing a climate-focused energy policy have been lost on many. For example, the media outrage over Manchin’s decision is evident, even though the senator is preventing the US from following Europe’s lead over the lack of energy supplies and rising energy costs. Look no further than a Google News search on “Joe Manchin” to see how the media frames the incident.

We expect Washington to exercise discretion and restraint to ensure that climate policies weigh their near-term economic, human and geopolitical impacts against their long-term environmental goals.

What Elizabeth Holmes had to say in court: 5 conclusions

Traveling to Disney Parks during Covid-19: What you need to know before you go