Midterm elections in America: Millions of votes without any major setbacks 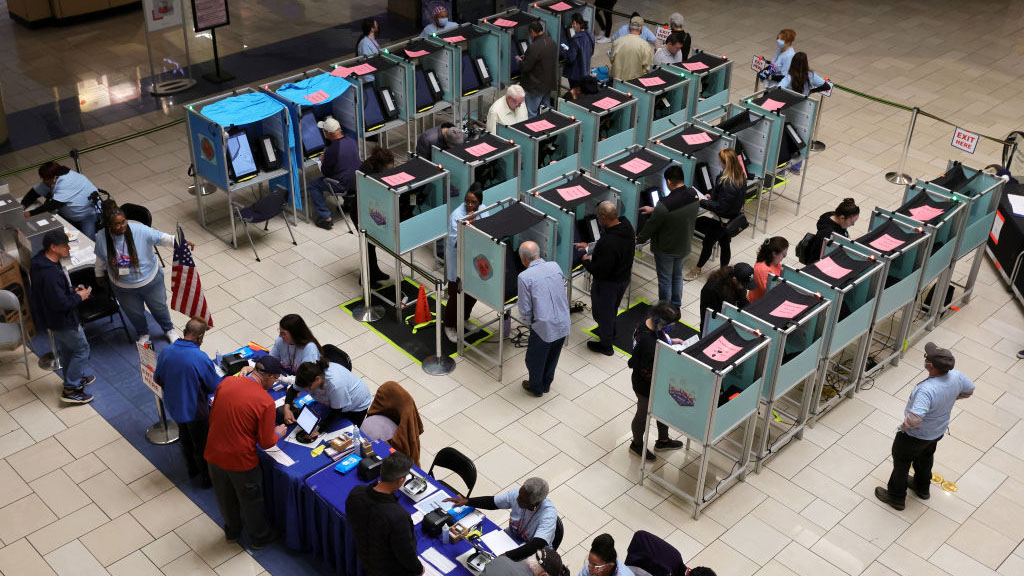 WASHINGTON — Americans were voting smoothly in the midterm election Tuesday, but under intense scrutiny after two years of false claims and conspiracy theories about how ballots are cast and counted.

With elections open across the country, there were no major issues with ballot papers, long lines or voter intimidation, although there were hiccups in some places, which is normal on any polling day.

For example, counting machines in one county in New Jersey and another in Arizona had malfunctioned, potentially requiring manual counting, and some polling places in North Carolina were slow to open because workers were late. . In one county in Pennsylvania, polling stations scramble to refill short supplies of paper ballots.

Polls opened across the country

“These are things we see every election day,” said Susannah Goodman, director of election security for Common Cause, an organization that advocates for access to the vote. “There is nothing to worry too much about this morning,” he said.

Since the last national election two years ago, former President Donald Trump and his allies have succeeded in sowing widespread distrust of the vote, fueling the lies of widespread fraud.

The campaign undermined confidence in elections and democracy among some parts of the electorate, leading to a ban on mail-in voting and new ID requirements in some Republican-ruled states, as well as death threats against election officials.

This year’s Election Day was marked by fears of new incidents of harassment and the possibility of interference in polling stations and election offices where votes would be counted.

Election officials said they were ready to deal with any problem and urged voters not to get distracted.

At a polling place in the Atlanta suburb of Woodstock, voter Tyler Moore, 25, said he would not be surprised if there was controversy after the election. After casting his vote in the church, he said, “Everybody knows that.” “But the best we can do about it is just vote.”

Problems with counting machines in 20% of the turnout in Arizona’s Maricopa County drew criticism on social media, but a spokeswoman for the State Elections Department said the problem was minor.

The Justice Department sent observers to 64 jurisdictions in 24 states to monitor the development of the elections. To see more from Telemundo, visit https://www.nbc.com/networks/telemundo.

“Voters have options,” said department spokeswoman Megan Gilbertson. “They can wait to cast their vote at the machine that is working, they can use the secure drop box, or if they don’t want to wait they can go to another vote center.”

Maricopa is Arizona’s most populous county and includes the city of Phoenix, a location where elections for governors and the US Senate are expected to close. It is also a state where there is deep doubt about the electoral system from 2020 onwards.

In Luzerne County, in northeastern Pennsylvania, many polling places were required to refill their ballots. County Attorney Mike Butera said no voters were turned back, more ballots were being delivered to all areas and voting would remain open for two more hours.

Even before the pandemic, many states began abandoning the single-day model to allow people to mail in their ballots in individual days or weeks in advance, or even weeks before.

To see more from Telemundo, visit https://www.nbc.com/networks/telemundo. go to

No major issue came up during the early voting period.

Some of Pennsylvania’s largest counties scrambled Monday to help voters correct mail-in ballots that had flaws such as incorrect dates or missing signatures on the envelopes used to mail them, causing confusion in the state. More challenges arose. , which is an important battlefield.

Around 44.5 million people across the country had already cast their vote on Tuesday.

Party affiliation appears to be an increasingly important factor in voting.

Republican suspicion of voting by mail has persisted under attacks from Trump and his allies.

US Democrats and Republicans face each other in an election Tuesday in which many say democracy is in danger.

Some Republican campaigners and candidates have even gone so far as to urge voters receiving mail-in ballots to wait until the last minute to receive mail-in ballots, arguing that this is somehow Democrats. prevent them from stealing elections.

There is no evidence of widespread fraud or voting machine tampering in the 2020 election. In the states where Trump has filed challenges, a comprehensive review all confirmed Biden’s victory, and dozens of judges, including those appointed by Trump, dismissed multiple lawsuits. Those who made baseless allegations illegal action.

Political campaigns are in the final stages on the eve of the midterm elections and the battle between Democrats and Republicans in the polls is tighter than ever.

But the false claims have become widespread among Republicans fueled by conspiracy theorists on social media and at rallies across the country.

An October poll by the Associated Press-NORC Center for Public Affairs Research found that 45% of Republicans had little or no confidence that midterm votes would be correctly counted.

And a majority of Republicans, 58%, believe the president, Joe Biden, was not legitimately elected, although the percentage is slightly less than 66% in July 2021.

Election officials recognize that electronic voting systems may be vulnerable and have taken several steps to increase security since the 2016 vote, when Russia discovered the vulnerabilities.

More than 34 million Latinos are expected to vote in midterm elections, an overwhelming minority that can decide a majority in many campaigns and in Congress.

Congress has sent about $900 million to states to increase their cyber security, which includes hiring more IT workers, replacing outdated systems and adding regular security testing.

In addition, most voters use hand-marked ballots or use machines that issue a paper record of their vote. These documents are used after the election to check whether the machines used for counting votes are working properly or not.

Before the election, conservative and Republican groups recruited local election workers and observers.

Inspired by lies about the 2020 election, some people wearing bulletproof gear and with guns hidden from their face masks even stood near Arizona polling places. Just last week, a judge ordered those groups to remain at least 250 feet apart.

Since the 2020 elections, the false allegations have sparked a wave of harassment and death threats against election workers and officials. This has caused some to leave the profession, a loss of experience that has added to the challenges of holding elections without incident this year.

Election officials have promised that they will not hesitate to approach security forces to protect voters and polling staff. The Coalition of Voting Rights Groups has volunteers available to assist any voter on Election Day at 866-Us-Vote.

As soon as the election is over, the results will be declared. Some states will report data faster than others because of differences in rules and deadlines for distributing ballots.