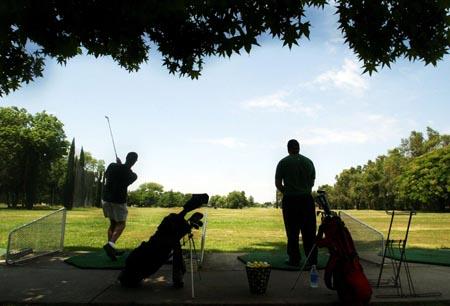 A total of 45 two-man teams participated in the 56th Annual Butte Creek Men’s Invitational Tournament, which concluded on Saturday after three days of grueling golf. It goes without saying that the golf shop and clubhouse staff did a great job arranging and running the tournament, along with some volunteers and generous sponsors. This year the format was four-ball, playing matches with five or six teams in eight flights, depending on how the odds worked. Each team competed against all the teams in their flight in nine-hole matches, playing 27 holes each day. It concludes on Saturday afternoon. The top teams in each flight, including the tie, proceeded to the 18th fairway to participate in a sudden death shootout.

Eleven teams participated in the shootout, which was a hoot; Audience, concert, mobile bar, amateur announcer with microphone (Schultz, aka, “Feherty”). The 18th hole was changed to par 3 for the sake of spectacle. Depending on the handicap of the players, 11 teams were played from three different yardages. After the dust settled and the roar subsided, the team of Mike Janke and Brandon Harris emerged victorious by defeating defending champions Cody White and Sean Ricks in 2021. The team of Todd Fearon and Patrick Sullivan took third place.

The pins in both flights over three days were too high to record the closest to the winners of the competition, with the net and gross skins won each day. However, Saturday only had a rough skin, a lone birdie at No. 18… Go Figure. It goes without saying that Hawkley walked away with a bunch of cash after collecting it for the only gross skin on the day. Maybe his staff at Royalair will enjoy a nice lunch by his side, and maybe Charlie Kyle will pick it up too… just saying. Special thanks to my ghost reporter “Snoopy Towers” for submitting all the stats.

Butte Creek Women’s Golf Club played its weekly game a day earlier last week to allow the 56th annual men’s invitational tournament to set itself on the course for its practice round on Thursday. The format was three-player, one best-ball and one best-put. The first place was held by the team of Paula Rich, Debbie Maderos and Sally Hayes with a score of 85. Irma Jenkins, Susie Westcott and Darlene Thomson finished second with a score of 91.

Canyon Oaks Women’s Golf Club lets the golf shop make decisions about their weekly games after turning over the score cards. The surprise game was “Mutt and Jeff”, in which the score for only 3 holes and par 5 holes was calculated, minus half of a player’s handicap. Shelley Carney had the lowest score of the day with 90. Carney, along with Cynthia Paulo, tied for the low net on 77. Games: 1, Pat Radisich, 27.5; 2, Carney, 28.5; 3, Wiki Spelling, 29; 4, Tye, Paulo, Jane Carlson and Dorothy Cranston, 29.5. Number 11: 1, closest to pinning on redisitch; 2, Carney.