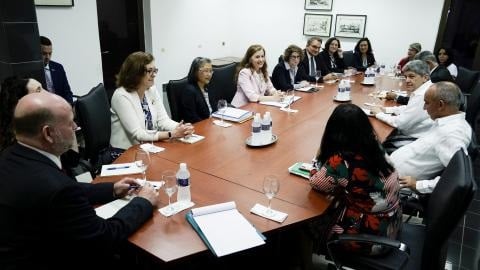 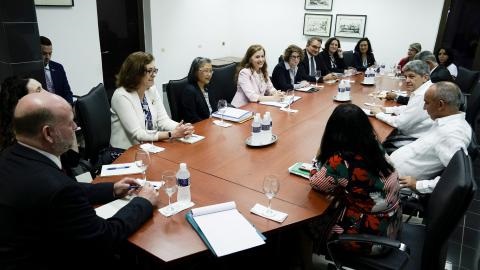 During the exchange, the Cuban representative reiterated the importance of fully resuming expatriate services. Photo: Cubaminerex

Deputy Minister Carlos Fernández de Cosio met with Rena Bitter, Assistant Secretary of State for Consular Affairs, and Ur Mendoza Jaddou, Director of Citizenship and Immigration Services at the United States Department of Homeland Security, at the State Department.

During the exchange, The Cuban representative reiterated the importance of fully resuming immigration and consular services at the US Embassy in Havana, Including non-immigrant visa processing.

They also reaffirmed the diplomatic headquarters’ willingness to contribute with the necessary steps for the full functioning of the Overseas and Consular Services.

The United States Embassy in Cuba announced on 6 May that it would resume limited processing of immigrant visas that month, After almost five years, scientists without consular services and on the pretext of official reports were rejected.

On March 3, the diplomatic mission notified of preparations to resume activities in the capital, paralyzed by the so-called “Havana Syndrome”, was dismissed by scientists and even the US State Department. Report also.

Under the mandate of Republican Donald Trump (2017–2021), the Legation minimized its staff in September 2017 on the basis of mysterious “sonic aggression” and alleged “health-related incidents” of diplomats, even though Cuba had from the beginning. He had denied being attacked and was ready to cooperate with the investigation.

The highest officials of the Antilles condemned what was in fact part of the charge. A political campaign to reverse the progress in relations between Cuba and the United States made during the administration of Barack Obama (2009-2017).

Without a definite weapon, motivation or authors prior to the accusation, the embassy here looked at aspects of the suspension of the family reunification program and the granting of visas that directly affected citizens of both countries, not the Antillean executive as part of North American rhetoric. in the form of. ,

In addition, although the United States committed itself to the 1984 migration agreements granting at least 20,000 visas per year, in recent years it only gives about four thousand each year, According to the Caribbean Foreign Ministry.

Over the past five years, Cubans have been forced to move to third countries for all of their procedures, adding to costs and without the certainty of approval, and there are some who bet on irregular migration that threatens lives. puts in danger.

Cuban Foreign Minister: Resuming US immigration services in Havana would be a step in the right direction