Miracle: Two men and their pet rescued in USA after 10 days wandering 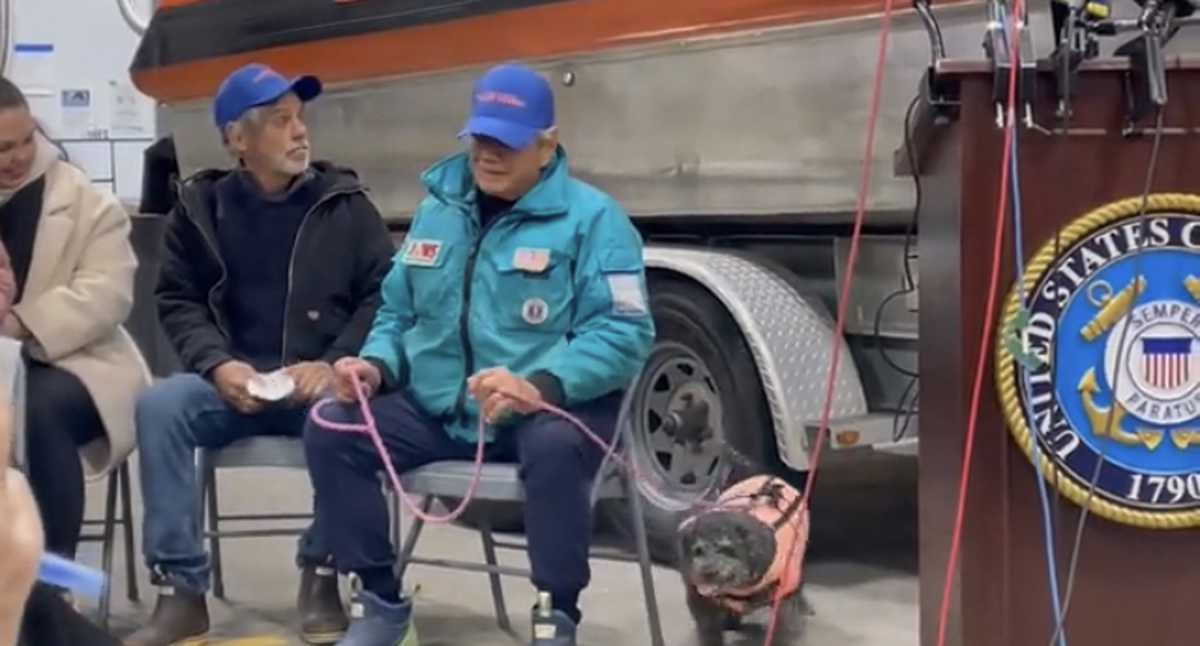 The case of men and a pet who were rescued after being carried aboard a sailboat in which they were held for 10 days is considered a true miracle.

According to the United States Coast Guard report, The small boat ran out of power and fuel 200 miles off the Delaware coast.

It noted that Kevin Hyde, 65, and Joe DiTomaso, 76, were sailing from Cape May, New Jersey, to Marathon, Florida, when the failures occurred, preventing them from reaching their destination.

The sailboat, Atrevida II, departed North Carolina on a voyage on 3 December, with an arrival point in Florida.After passing Cape May.

“2 sailors and a dog were rescued after spending several days at sea aboard the Atrevide II sailboat. The USCG Atlantic Area (Coast Guard) searched with aides until they were located by the tanker Silver Muna, 214 miles E of Delaware. BZ to everyone involved!”, the agency said on its Twitter account.

2 sailors and a dog were rescued after being lost at sea on the sailboat Atrevide II for several days.

@USCG searched with partners until they were located by the tanker Silver Muna 214 miles E of Delaware.

BZ to all involved!

For its part, Saurabh Jain_BPCL reported that “two men Kevin (65 years old) and Joe (76 years old) and their dog were rescued after 10 days in the waters off the Delaware coast, which sailing from New Jersey to Florida, disappeared off the outer edge of North Carolina Somewhere on December 03, 2022 And after posting a video of the operation, was driven about 500 miles from New York.

Two men Kevin (65 years) and Joe (76 years) and their dog were rescued after 10 days in the waters off the Delawares coast, sailing from New Jersey to Florida, on 03 Dec 22 in the Outer Banks of North Carolina Disappeared somewhere and went about 500 miles from New York. pic.twitter.com/bdAGhA5qw7

“My brother-in-law, Sudhanshu Jain, who is chief engineer on the oil tanker Silver Muna en route from Amsterdam to New York, saw this impotent sailing vessel and The crew conducted a rescue operation on 13 December’22” off the Delaware coast in rough weather and strong winds. Indian.

And he added that “all three received immediate first aid and are stable and will remain aboard the Silver Muna until arrival in New York. The crew showed an outstanding example of work in this harrowing but fast-paced rescue operation, yet a And the sea story.”

After rescue and arriving at the safe port, The two men held a press conference in which they revealed that they had been swept away in a storm, but that they survived with little faith, With his pet named Minnie.

Hyde said, “It’s a small miracle they found us.” fox 5 new york, After being told that “a big storm” drove them off the road.

Meanwhile, DiTomaso said that “The only thing I asked God for was to see my granddaughter” “There were 40-foot (12-metre) waves, mountains, I was looking at them.”

“They’re back! 2 #NewJersey sailors and Minnie Poodle lost at sea for over a week. Joe DiTomaso, 76, and Kevin Hyde, 64, were on their way to Florida but got lost. Out of fuel and out of power Their radio was not working,” reporter Melissa Colorado reported after posting video of the two men and the rescued pet.

they came back! 2 sailors from #new jersey & the Mini Poodle was lost at sea for over a week.
Joe DiTomaso, 76, and Kevin Hyde, 64, were on their way to Florida but lost their way. No fuel and no power. His radio was inoperative. How did they survive?

Despite the fact that they wandered for several days, the relatives of the two men did not suspect that they were in trouble. “They wanted to get away and move to a warmer climate,” said Nina DiTomaso, the daughter of one of the sailors.

“My dad is so bad with the phone and charger, we kept calling and it went to voicemail,” she said, according to Joe. new York Times, However, she admitted that she started to worry after Kevin didn’t respond.

The family also got suspicious They later found that the credit cards of the two men had not been used since they left.

Hyde and DiTomaso told the press that last Tuesday they waved their arms to attract the attention of the tanker Silver Muna off the coast of Delaware.

“We were gesturing and doing things like that because by then my mast was down, all the systems were silent, we were hanging on to the boat,” Hyde narrated.

He called the discovery a miracle, noting that “It’s like finding a needle in a haystack in this situation.”

For his part, Daniel Schrader, a spokesman for the Coast Guard, highlighted the work done by various vessels to rescue the two men and the mascot.

“This is an excellent example of the joint efforts of the maritime community to protect life at sea,” said through a press release.

He stressed the importance of deep-sea voyagers having a device known as an “EPIRB” (an acronym for “Emergency Position Indicating Radio Beacon”), which allows contact with emergency teams. gives.

One Illness Reminds Democrats They Have No Votes to Spare