More than 100 years old house still known as Paseo de la Reforma. can be seen on The construction has stood for 113 years and is almost intact (Photo: Twitter/@cdmexeneltiempo)

In the midst of the modern skyscrapers filling the Paseo de la Reforma is a small building that is over 100 years old, which resembles a mansion and is known as L Chale.

The building’s origins date back to the early 20th century.When the Italian-Mexican businessman Dante Cusi Castoldi hired the then architect and engineer Rafael C. Goenche to build his house on the Paseo de la Reforma in 1907 during the Porphyrian period.

nine years later In 1916, Joe would begin living there with his wife Teresa Armella and their four children Dina, Elodea, Ezio and Eugenio. Building Av. Paseo de la Reforma is located at number 365, At the Cuauhtémoc mayor’s office in Mexico City.

It has a built up area of ​​600 square meters and its entire land is 1,183 square metres, The house has a stairway to reach the first level and the highest elevation point is in the center of the complex and a fairly steep roof can be seen. The red tiled crossing indicates that the estimated height of the construction is 15 metres.

The historiographer Alfredo Pureco Ornales described something of Italian in one of his publications concerning merchants in Michoacán:

“This Italian emigrated with his family from Milan to the United States in the 1980s. He pursued a banking career in the neighboring country, but with no job opportunities, he soon decided to move to Mexico City .

Don Dante Cusi Castoldi was born in Gambara on November 17, 1848, and his story as an agricultural producer in the state of Michoacan follows the success of an immigrant invited by President González. The Italian moved into his mansion with his family by 1916 (Photos: tiempodemichoacan.com)

Dante Cucci was an Italian merchant who arrived in Mexico in 1882 and was also the owner of Lombardia and Nueva Italia Haciendas in Michoacán, which are today the cities of the said entity.

During his stay in the nation’s capital during the first decade of the 20th century, he commissioned the architect Raphael to build his mansion, resulting in the distinctive building on the Paseo de la Reforma.

It is one of the first houses located on Paseo de la Reforma Avenue, although it was one of the tallest houses at the time, it is currently one of the smallest buildings in the area.Because the people around him are very tall.

The Cusi family chalet, more than a century after its construction, continues to attract public attention.Because when they are exposed to it they stop appreciating its uniqueness Eclectic style architecture.

Its facilities are in very good condition and despite the interventions done by it, it has managed to maintain the style with which it was built.

It can be clearly seen that its façade was made of stone, its many double and triple windows were designed with wooden finishes and blacksmithing was applied to both its main entrance and balconies. 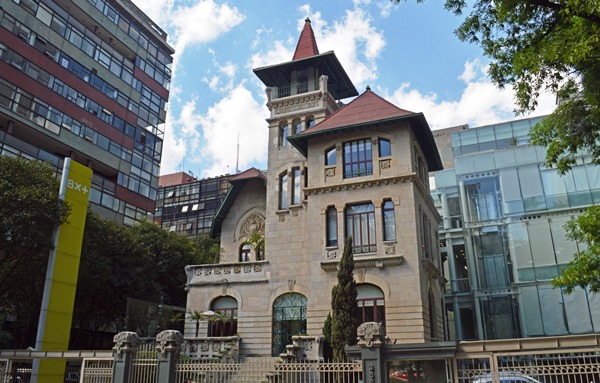 It is currently used for the offices of the Kaluj Foundation, a cafeteria and a small restaurant (Photo: express.info)

After the revolutionary process, the house became the property of Don Antonio del Valle Talavera and his sons and grandchildren, who have been able to protect it with great care.They expanded their service space to the east garden, with the applicable office of the Kaluj Foundation Dependency and a small restaurant located in the basement of the house.

Fortunately, currently the building’s spaces are used as offices on the upper floor and there is a cafeteria open to the public on the ground floor, so you can enjoy the view in and out of the place.

María Asunción Aramburuzabala: These Are Some of the Magnificent Buildings Built by the Producer of Mexico’s Richest Woman
Three people were injured when an elevator collapsed in a building south of CDMX
Maria de Jesus killed after being thrown from a building, IPN recognizes crime and gives postmortem to her mother