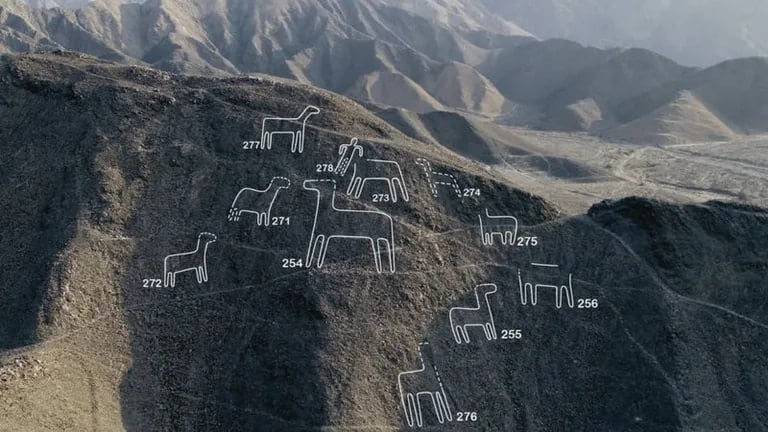 Thanks to eight months of field work, archaeologists from Japan’s Yamagata University discovered 168 large figures near the city of Nazca in Peru.

,it is believed that geoglyphs date from between 100 BC and 300 AD”, according to the researchers in a press release, and correspond to human figures and animals such as orcas, cats, birds, camels and snakes.

The research, which used high-resolution aerial photography and drone images, was led by academic Masato Sakai in collaboration with Peruvian archaeologist Jorge Olano.

The 168 recently discovered geoglyphs have been added to the other 190 that were found by 2018, thus creating a A total of 358 geoglyphs were discovered near the Nazca lines. (also spelled as Nasca), declared a UNESCO World Heritage Site in 1994.

These geoglyphs were created in ancient times by removing black stones from the surface of the earth to expose a deeper layer of white sand.

researchers have explained There are two types of geoglyphs: Linear type and Relief type. Of the recent findings, five are linear, while the remaining 163 are reliefs.

The study is the product of an alliance between Peru’s Ministry of Culture and Yamagata University for the conservation and scientific research of geoglyphs, thanks to which an archaeological park was established in 2017 to protect the geoglyphs discovered by the university. Aja area, near the center of the city of Nazca.

Now, archaeologists are using artificial intelligence to elucidate the distribution patterns of geoglyphs and thus contribute to their conservation.