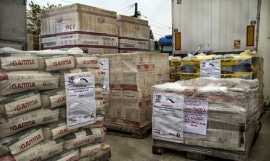 MADRID, December 12 (Prensa Latina) A new container was loaded in Torrejón de Ardoz, a community of Madrid, with a view to its shipment to Cuba, sponsored by the Spanish State Solidarity Movement (MESC). It was announced today by the alternative media Cubiformación directed by Jose Manzaneda, who detailed the contents of the cargo that will leave on December 19 from the port of Bilbao, Basque Country, for the Caribbean island.

The container with 74,000 Euros worth of material was delivered to Torrejón de Ardoz to support various projects in Santiago de Cuba.

It was financed by various associations of the MESC, such as the Hispanic-Cuban of Malaga, Euscadí-Cuba, Medicuba Spain, Ernesto Guevara of Torrejón de Ardoz and the Valencian Association of Friendship with Cuba José Martí.

Other groups that contributed to the charge were the Federation of Pensioners of the Workers’ Commission, the Federation of Friendship with the Federal and Madrid, Cuba José Martí de Burjasot, the municipalities of Málaga, Campillos and San Fernando de Henares, as well as the Provincial Council. of Malaga.

Likewise, educational and health materials donated by individuals and by institutions such as the Alfas del Pie Town Hall (Alicante) were collected.

Along with solidarity workers, Cuban embassy staff participated in clearing the shipment.

According to MESC, the shipment leaving Bilbao is part of a campaign launched this year called “Tons of Solidarity Against the US Blockade of Cuba,” which will continue until 2023.

US urges China to stop ‘provocative’ flights over Taiwan’s airspace

Save big now with early home and kitchen deals