Nicaragua highlights the impact of ALBA-TCP on Latin American peoples 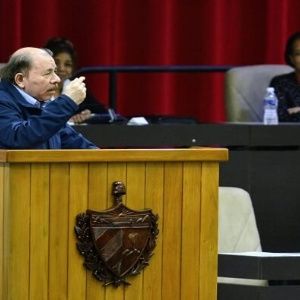 The President of Nicaragua, Daniel Ortega, on Wednesday highlighted the impact of the Bolivarian Alliance for Our Americas – Peoples’ Trade Treaty (ALBA-TCP) on the unity and solidarity of the countries of Latin America and the Caribbean.

The President delivered a speech at the extraordinary session of the National Assembly of People’s Power of Cuba, commemorating the 18th anniversary of ALBA-TCP, where he indicated that “ALBA’s influence in the field of unity, projection.

“We must also add to the influence of ALBA that Latin American and Caribbean peoples have wished for once and for all to realize the dream of (Simon) Bolivar in the Community of Latin American States and the Caribbean (Selac),” They said.

Furthermore, he explained the importance of continuing to open positions as he believed “the fight is undeniably immense.”

He said, “We are facing a new gatekeeper that was closed by imperialism by the colonial nations at the time of the formation of the United Nations after World War II.”

On the other hand, President Ortega insisted that the Cuban people are heroic in their fight against the economic, commercial and financial blockade imposed by the United States of America (USA).

In reference to the resolutions against the blockade, “It is a heroic, conscious, brave people, who are currently facing a battle that demands the utmost solidarity and greater pressure within the United Nations, that have voted for “

He also recalled the legacy of Commander in Chief Fidel Castro and Commander Hugo Chávez, noting that the close ties between Cuba and Venezuela allowed the alliance to emerge.

“Fidel and Chávez are here on this day, the 18th anniversary of the founding of ALBA. They are present, we feel them in our veins, in our hearts, in our souls. They give us more strength and determination to continue the war are. fight.” , he insisted.