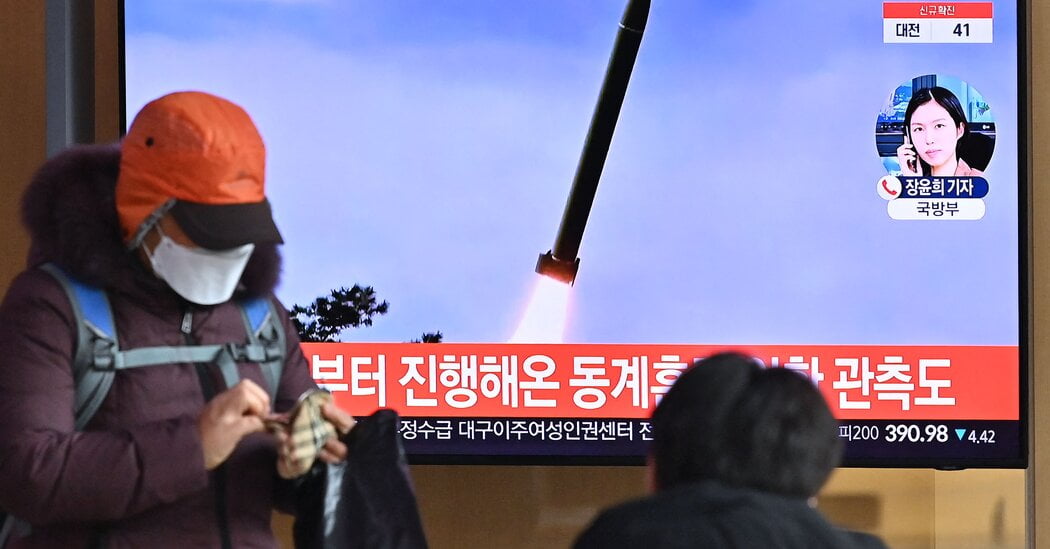 SEOUL – North Korea fired two ballistic missiles on Friday in its third missile test this month, hours after it warned of a “stronger and more definite response” if the United States helps impose additional sanctions against North Korea in a response to a recent series of missile tests.

According to the South Korean military, two short-range ballistic missiles flew out of Ouiju, a county near North Korea’s northwestern corner, and flew 267 miles before crashing into the waters off the country’s east coast. He added that his analysts have been studying trajectory and other flight data since launch to find out more.

The new trials have heightened tensions at a difficult time in the region, as China prepares for the Beijing Winter Olympics next month and South Korea for the March 9 presidential elections. The escalation also comes at a time when the Biden administration is fighting for its diplomacy to stave off a potential Russian invasion of Ukraine.

Earlier Friday, the DPRK Foreign Ministry issued a statement condemning the United States’ proposal for the UN Security Council to impose new sanctions on North Korea after several tests of ballistic and other missiles since September 2021.

Separately, on Wednesday, the Biden administration blacklisted five North Korean officials working in Russia and China who, according to Washington, are responsible for purchasing goods for North Korean weapons of mass destruction and ballistic missile programs.

North Korea resumed missile testing in September after a six-month hiatus. Since then, it has conducted at least seven missile tests, including one on Friday. The tests involved a long-range strategic cruise missile, ballistic missiles rolled out of mountain tunnels, and a submarine mini-ballistic missile. Two tests this month launched so-called hypersonic ballistic missiles with detachable gliding warheads, which made them difficult to intercept as they could change course during flight.

All tests violated UN Security Council resolutions prohibiting North Korea from developing or testing ballistic missile technology or technology used to manufacture and deliver nuclear weapons. But the DPRK foreign ministry on Friday insisted that it was exercising “its right to self-defense” and that the missile tests were “part of its efforts to modernize its national defenses.”

“The United States deliberately escalates the situation even when independent sanctions are activated, not content with transferring the just activities of the DPRK to the UN Security Council,” the ministry said in a statement using the abbreviation of the DPRK’s official name, the People’s Democratic Party. The Republic of Korea. It added: “If the United States takes such a confrontational position, the DPRK will be forced to respond to this more decisively and decisively.”

The statement did not specify possible future actions by North Korea. But the country has resumed missile testing after meetings between its leader Kim Jong-un and then-president Donald Trump ended without agreement on how to end the North’s nuclear program or when to lift sanctions.

These tests showed that the North is developing more sophisticated ways to deliver nuclear and other warheads to South Korea, Japan and US bases on its shorter-range missiles, military analysts say. Some of the missiles he has tested since 2019 have fired solid propellants and performed mid-air maneuvers, analysts said, making them difficult to intercept.

North Korea has not resumed testing long-range missiles that could directly threaten the continental United States since it conducted three ICBM tests in 2017. But after the collapse of Kim and Trump’s diplomacy, North Korea warned it would no longer feel bound by a moratorium on nuclear testing and long-range missile testing. Since then, it has unveiled its largest yet to be tested ICBM in history during a military parade and exhibition.

North Korea reiterated on Friday that its missile tests “did not target any specific country or force and did not harm the security of neighboring countries.” But during tests on Tuesday, a hypersonic missile of the North crossed the country from west to east, and then turned northeast, flying over the waters between the Russian Far East and Japan towards the Pacific Ocean, according to the schedule of its trajectory in one of the photos published in state North Korean media.

The missile hit a target 621 miles away, North said. And with the rocket flying out of North Korea at 10 times the speed of sound, aviation regulators briefly suspended flights from some airports on the US west coast as a precaution.

According to North Korean media reports, this was the first missile test attended by Mr. Kim since March 2020.

The test prompted South Korea to reassure its residents this week that its military can detect and intercept North Korea’s new missiles.

Washington repeatedly called on North Korea will return to negotiations, but the country has said it will not do so until it is convinced that the United States will lift its “hostile” policies, including sanctions.

China, which could veto Washington’s attempt to impose new sanctions in the Security Council, has called for dialogue.

“Deliberate sanctions do not help solve the problem of the Korean Peninsula, but only worsen confrontational sentiments,” Chinese Foreign Ministry spokesman Wang Wenbin said at a briefing on Wednesday.

All 128 miners evacuated after Russian mine incident