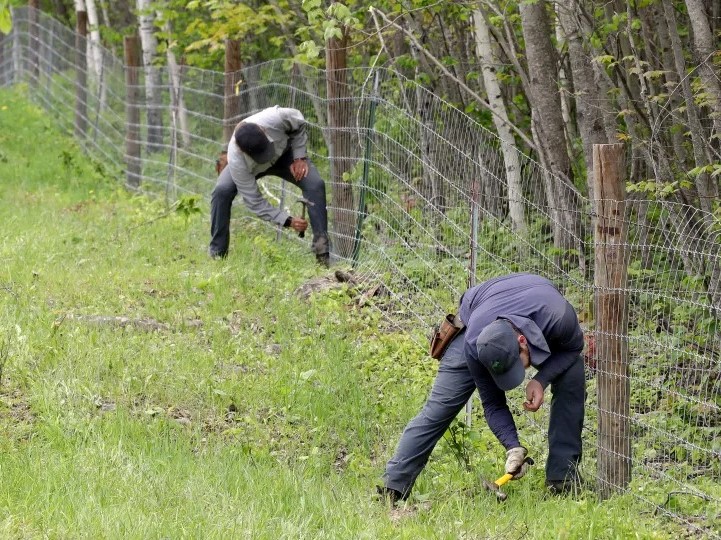 Near ORR, Min. – They say good fences make good neighbors, and Wes Johnson is hoping that the more than 7 miles of good fences around his cattle ranch will eventually weed out good neighbors from the growing population of local wolves.

For the past 20 years, this is where wolves have been coming to die, more than any other place in Minnesota. They were the first to feed every spring, hunting some of Johnson’s newborn calves. But then federal trappers came and killed the wolves — as many as 16 in the same year, three already this year, and 86 wolves trapped and killed in this wild patch of northwestern St. Louis County since 2002.

Johnson’s sprawling, 1,600-acre farm with 450 cows and calves has been the poster child for an ongoing conflict between a charismatic endangered species and a rancher trying to make a living from them. During the ongoing debate over wolves, it has seemed at times that the two factions cannot coexist.

Johnson and his family have tried flagging, motion-activated sound-blaring devices, hard-kicking donkeys, and even daily horseback riding to keep wolves away. They quickly bury any dead cattle before the wolves come to the feast. Nevertheless, every spring during the calf season, more wolves would arrive. More calves died. Then more wolves died.

But if the fencing works and the wolves stay out, Johnson’s cattle ranch could become an example of how polarized interests can coexist. Work began last summer and so far, about 5 miles of the 7.5-mile perimeter of the farm has been fenced.

There are early signs that wolves are choosing not to cross. GPS-collared research has tracked wolves moving toward fences, walking down the fence line, and then moving forward. Trail cameras also show wolves living outside where there is a fence.

“I think it’s going to work. Hell, it already is,” said Johnson, driving a truck across his land. “We haven’t seen nearly as many wolves since fencing started …and our cows are a lot quieter than they were this year.”

Woven wire fences for the last two miles or so are on the rise this summer.

The fencing was the idea of ​​University of Minnesota researcher Thomas Gable, who heads the Voyager’s Wolf Project, an ongoing wolf research effort that has been uncovering the behavior of northern Minnesota wolves for the past seven years.

In recent years, as federal trappers worked to protect Johnson’s cows, more and more research wolves — including wolves wearing GPS collars as part of the Voyager Wolf Project — were being killed on the farm. Some may have hunted calves. Others did not. But if they were caught in the field after a calf had been killed, they were thrown out.

Of all the GPS-collared wolves that have died during Voyager Wolf Project research over the years, 26 percent have been killed at Johnson’s farm, even though it covers less than 1 percent of the study area. About 9 percent of all wolves estimated to live within the study area have been farmed and killed.

What began as a tense meeting a few years ago, Johnson and the federal trappers were the first to suggest that Gable pursue his research project. Gable said it was as impractical as Johnson was growing his farm. But Gable suggests they find a solution that will help all sides and end the constant cycle of wolves killing wolves, calves being killed and then wolves being killed with nets. Used to be.

Johnson Cattle Farm borders several different wolf packs, and along a common route used by lone wolves, some sort of geographic quirk that keeps an endless supply of wolves nearby.

“It just kept happening. The wolves were going to fill the vacuum left by whatever pack was stuck out here,” Gable said. “I just thought there had to be a better way.”

Gable offered the help of his team of seasonal research staff and used his fundraising contacts to find some money. Johnson bought into the plan and invested some $15,000 of his own money, equipment and time. and John Hart, Grand Rapids-based district supervisor for the U.S. Department of Agriculture’s Wildlife Services Division — the top federal trapper in Minnesota — coordinated federal aid.

The entire project is expected to cost around $100,000, thanks mostly to “donated” labor from the Voyager Wolf project crew and Johnson’s own sweat equity for supplies.

“They first got a bid and it was something like $300,000 for a fencing company to do that. No one could afford that kind of money,” Johnson said.

Support has come from sources as diverse as the USDA National Wildlife Research Center, the Minnesota Department of Agriculture, the International Wildlife Coexistence Network and the Humane Society of the US, which is one of the most vehemently pro-wolf, anti-trapping. Anti-poaching and anti-vegetarian groups in the country.

“I think we all ended up with a win-win situation. But pulling together was not easy,” Hart said. “The most important thing was to find a producer like Wes to buy into. Otherwise it wouldn’t have happened.”

Both 6 ft high and 4 ft high enclosures are being used in the project. But Hart said that previous research by his staff found that a 4-foot fence is enough to keep wolves out.

“There were no goggles in there for fencing the wolf. … But we found that, for whatever reason, even though they could have easily done it, they wouldn’t want to jump in,” Hart said. “They would rather dig down. “

To prevent this, the entire fence perimeter is also being lined with 2 feet of wire skirting on the ground outside the fence, to prevent wolves from digging their way into the field.

Johnson has been working on this ranch in one way or another for almost 60 years. About 30 years ago, he bought the land and expanded a few hundred acres of clear grassland into 1,600 acres of grazing and crop land. It’s as if someone plucked a chunk of eastern Montana in the middle of a Minnesota northern wilderness, with cows grazing on rolling, mostly lifeless hills.

It seems an impossible location for such a large cattle operation, surrounded by Kabatogama State Forest and County Forest land, which crows 7 miles north with Voyager National Park and the Superior National Forest just down the road .

“It doesn’t look like anything else here,” Gable said.

The sheep farm was formerly a horse stable, the place in the early 1900s where logging companies kept their large draft horses to haul white pines from the forest in the summer between their winter work. In the 1930s, it briefly became a sheep farm, and somehow the name stuck on a secluded road north of Orr, about 15 miles north of US Highway 53.

Johnson started working here in 1963 and his family has kept cattle here since the 1980s. Now their son Bob is helping and granddaughter Savannah looks forward to someday taking over the reins of the farm. Every morning during the summer, Savannah rides on her horse and rides around the perimeter of the farm. He rides on wolves attacking calves, and even has video of one such attack.

Gable says he believes the wolves will get used to the fence and realize they can’t get around it, then move on to hunt deer and otters, Their usual answer is jungle food.

“Most of these wolves have never seen a fence before,” Gable said, adding that it would be important to plug any low spots – where creeks or ravines cross under the fence – where wolves would try to go down. .

Hart said a similar but much smaller fencing project around a sheep pasture near Effie, Minn., solved a problem where trappers were called in almost every year for two decades. Since the fence was put in place in 2020, there has not been a single wolf attack on the sheep. And no wolf has been trapped and killed.

Fencing “is not a recipe for every wolf problem. If you have many (livestock) producers in one area it won’t work because you pass the problem on to the next guy,” Hart said. “But this place is so different, it works here.”

“Credit to them, they were looking for a solution that everyone could live with,” Johnson said between puffs at Marlborough. “And it’s working. That’s a good thing. … If it helps their wolves, fine. All I want is for my calves to be left alone.”

WHO: COVID-19 cases on the rise in most parts of the world