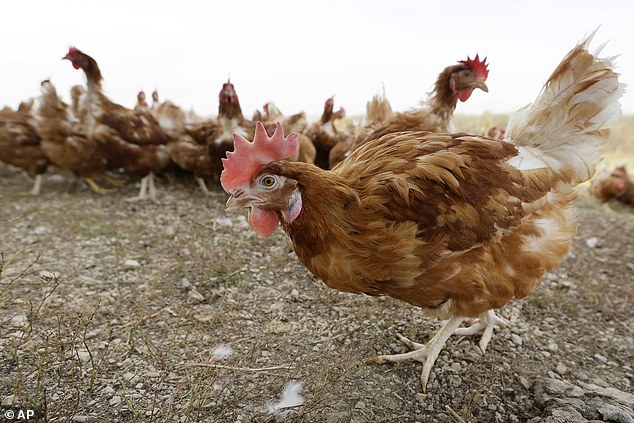 Local health chiefs confirmed that a four-year-old boy from Zumadian in Henan province tested positive for the avian influenza strain.

The child – who had a fever – was exposed to chickens and crows raised at his home.

The virus is usually spread by touching infected birds and their droppings, or while preparing infected poultry for cooking.

None of the close contacts of the boy were infected with the strain.

China’s National Health Commission has yet to provide any update on the boy. The NHC said bird flu is believed to kill half of those infected.

Preliminary investigations suggest that the strain does not have the ability to be passed from human to human, leading Chinese doctors to claim the risk of a large-scale outbreak was low.

The H3N8 type — one of several types of bird flu — is common in horses and dogs and has even been found in seals. Yet no human cases were reported so far.

The NHC advised people to avoid direct contact with live poultry and seek medical attention if they show any symptoms of the flu.

The National Health Commission (NHC) announced on Tuesday that a four-year-old boy from Zumadian in Henan province was confirmed to be carrying the variant after suffering from fever on April 5. The child was in contact with chickens and crows reared in his house. The virus is usually spread by touching infected birds and their droppings or while preparing infected poultry for cooking.

Bird flu can cause fever, muscle aches, headache and cough – similar to the traditional form of the virus.

Victims may also experience conjunctivitis, along with diarrhea, malaise, abdominal pain, chest pain and bleeding from the nose and gums.

Infected people are treated and isolated either at home or in hospital. Antivirals can reduce the severity of the disease.

This means that it contains a mixture of genes from the virus that has previously been found in poultry and wild birds.

There are several types of bird flu in China. It has a large population of farmed and wild birds, which encourages avian viruses to mix and mutate.

Most of them do not infect humans. Only four strains have raised concern in recent years after infecting humans – H5N1, H7N9, H5N6 and H5N8.

The mortality rate from bird flu in humans has been estimated to be up to 50 percent.

But transmission to humans is so rare. The World Health Organization has reported fewer than 500 bird flu deaths since 1997.

Britain experienced its biggest ever bird flu outbreak last month, after H5N1 cases rose in November after they were first seen in North Yorkshire.

Grandfather Alan Gosling, 79, who lives in Devon, became the first human case of H5N1 after being caught by a duck at his home in Britain.

He self-isolated at his home for three weeks at the start of the year, until he eventually tested negative.

The introduction of avian flu measures to control the outbreak meant Britons could no longer buy free-range eggs, as chickens were kept inside for longer periods.

The World Health Organization had also recorded 75 confirmed cases and 32 deaths due to H5N6.

A virus that kills up to 50% of humans… but transmission is rare: Everything you need to know about bird flu

What is bird flu?

Bird flu, or avian flu, is a contagious type of influenza that is transmitted among bird species but, on rare occasions, can jump to humans.

Like human influenza, there are several types of bird flu:

The current outbreak in birds in the UK is H5N1, a strain of infected Britons.

Where has it been seen in the UK?

There are currently 96 cases of avian influenza H5N1 in England. There are also two cases in Wales and two in Scotland.

How deadly is the virus?

The mortality rate from bird flu in humans has been estimated to be up to 50 percent.

But because transmission to humans is so rare, nearly 500 bird flu deaths have been reported to the World Health Organization since 1997.

Is it transmitted from birds to humans?

Cases of bird-to-human transmission are rare and do not usually spread from human-to-human.

Bird flu is spread by close contact with an infected bird or the body of someone.

Professor Ian Jones, a virologist at the University of Reading, said: ‘Transfer of avian flu to people is rare because it requires direct contact between an infected, usually dead, bird and the person concerned.

‘It poses a risk to operators who are charged with disposing of dead bodies after an outbreak, but the virus is generally not transmitted and poses little danger.

‘It doesn’t behave like the seasonal flu we’re used to.

‘Despite current concerns about the virus, there is no threat to chicken meat or eggs and there is no need for public alarm.’

What are the symptoms?

Bird flu symptoms usually take three to five days to appear, with the most common being: