Notre-Dame is getting a facelift: it will be a sustainable and green Paris cathedral 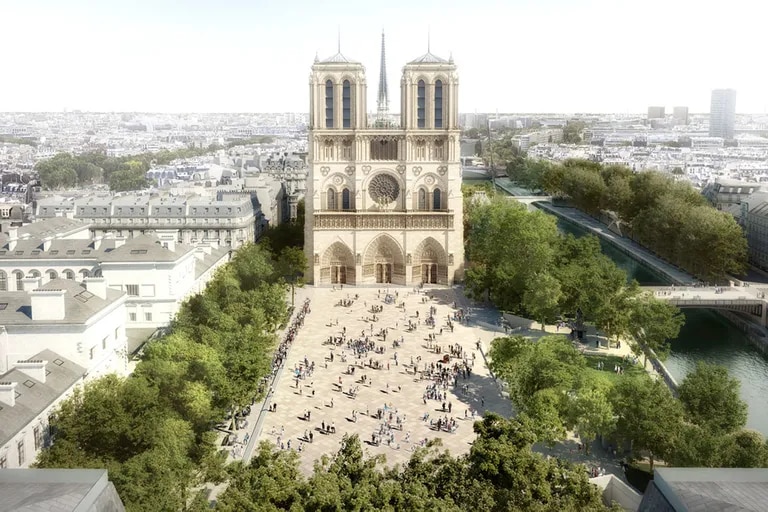 One of the events that most affected humanity in recent years was the fire in the Cathedral of Paris our Lady In 2019. French President Emmanuel Macron then announced the return of the church to its original state.

However, the city of Paris took the opportunity to restore beyond the iconic building. In parallel, a design competition was launched recreate the cathedral And on June 27, the winner was announced: a team led by landscape designer Bas Smets.

committed to being Europe’s greenest city in 2030, the capital of France, will transform the Isle de la Cité, the island of Seine where Notre-Dame sits, into a sustainable microclimate. The square in front of the cathedral will be repurposed as an open space surrounded by greenery with surrounding trees shading the seating area. There will be a greater diversity of trees that are resistant to high temperatures, require less water and can withstand long periods of drought.

The square behind the cathedral, currently divided by hedges and fences, will become one large continuous public space that opens onto the top of the cathedral and Total 131 new saplings will be planted, The City of Paris aims to start construction in 2024 and complete it in 2028 US$50 million budget.

specializes in smiths Transforming hyper-urban sites and turning them into ecological oases, as he did for LUMA Arles, a creative campus in Provence, which he completely transformed. It went from a concrete platform without vegetation to an 11-hectare lush green park with more than 500 trees that depend on a sustainable water circulation system. The large pond serves as a reservoir for irrigation and as a cooling device during hot summer days. pond, as well as the new topography and its vegetation, create a microclimateeffectively turning a concrete desert into a lush green public park.

and to Notre-Dame, There are plans to convert a portion of the underground parking garage into a visitor center. More than 3,000 square meters to receive tourist groups that used to congregate in the atrium, in addition to providing access to the archaeological crypt and an opening on the Seine.

Elsewhere, a ground cooling system will be installed that will send a 5 mm sheet of water across the square in front of the cathedral during the summer. This would lower the temperature of the area by several degrees, creating a microclimate around the cathedral and Will create a bright and reflective foreground for tourist photos, Smets hopes it will become an attraction of the same magnitude as the Flickering Light Torre Eiffel,