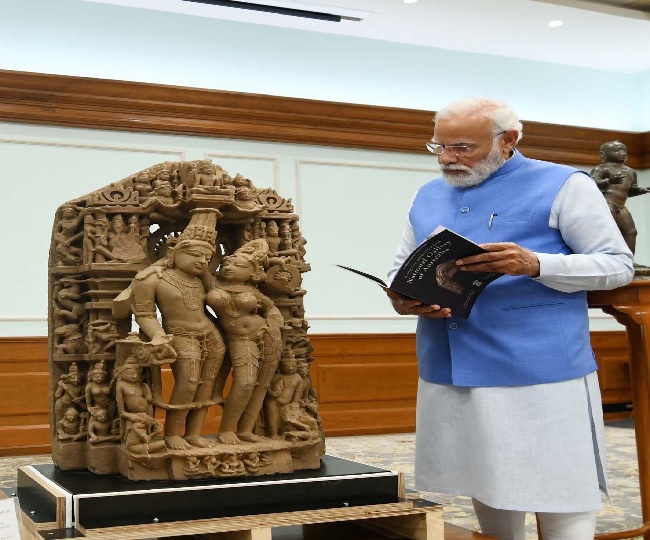 In support of India’s drive to recover the country’s stolen artefacts from around the world, Australia has repatriated antiquities that come from various time periods, some dating back to the 9th and 10th centuries AD.

During the India-Australia virtual summit, Prime Minister Modi thanked Morrison on behalf of all Indians.

“I thank you for the initiative to bring back Indian antiquities. Among the antiquities sent by you are artifacts and photographs that are hundreds of years old, which were illegally exported from Rajasthan, WB, Gujarat, Himachal Pradesh and other states. On behalf of all Indians, I thank you,” Prime Minister Modi said.

Prime Minister Modi inspects 29 antiques that have been repatriated to India by Australia. Antiquities are divided into 6 broad categories by subject: Shiva and his disciples, worship of Shakti, Lord Vishnu and his forms, Jain tradition, portraits and decorative objects.

The antiquities are divided into six broad categories according to themes: “Shiva and his disciples”, “Worship of Shakti”, “Lord Vishnu and his forms”, Jain tradition, portraits and decorations.

According to sources, these are primarily sculptures and paintings made from a variety of materials – sandstone, marble, bronze, brass and paper.

Other antiquities include a portrait of Maharaja Sir Kishen Pershad Yamin Lal Din Dayal, a memorial portrait of Hiralal A. Gandhi, and an untitled portrait of the donor and priests “Manorat” in front of Shri Natji, Natdwara.

According to the Archaeological Survey of India, 228 antiquities have been returned to India since 2014.

“The cultural restitution saga continues. @ASIGoI received 29 antiques from Australia. A total of 13 antiques were returned between 1976 and 2013. A total of 228 antiques have been returned from 2014 to date,” ASI said in a statement.

UK economy has no good options ahead, but fewer bad options

Mexico is the seventh healthiest country for digital nomads

On Video: It Was the Crash of a NASA Ship Against an Asteroid

Cuba’s squad for the Under-23 Baseball World Cup announced

Great season: Romina Paraguirre named Goalkeeper of the Year in Australia and champions with Gladesville Ravens

Musk receives $7B backing for Twitter bid from tech heavyweights