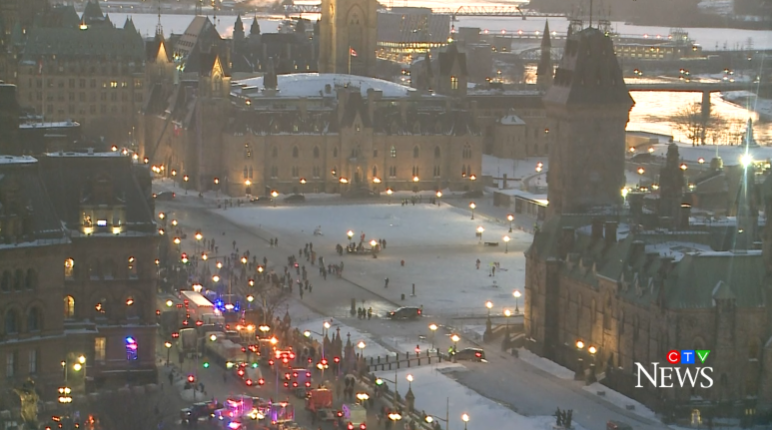 As protesters protesting against COVID-19 restrictions remained on Parliament Hill on Sunday night, city officials are urging people to avoid non-essential travel and work from home when possible on Monday.

Elected officials, business owners and residents are expressing dismay at traffic blockades, fireworks and incessant honking as the second full day of the “Freedom Convoy” in downtown Ottawa ends.

“We’re making progress, there’s no real clarity yet,” Chief Peter Slowley said, adding that police are communicating with the main organizers of the “Freedom Convoy” and “whom we can reach.”

“I think the only thing we can say for sure is that we’re still going to be dealing with some level of traffic disruption and performance over the next 24 hours.”

Ottawa Police and the City of Ottawa are urging people to avoid non-essential travel on Monday, especially in the downtown core.

“If you work in the downtown core, please plan to work from home if possible,” police said Sunday evening.

Ottawa police say there are “multiple” criminal investigations underway in relation to Saturday’s incidents, including “threatening/illegal/intimidating behavior to police/city employees and other individuals and damage to a city vehicle” .

At 9 p.m. Sunday, hundreds remained along Parliament Hill and Wellington Street, while hundreds of trucks parked across the downtown core and along the Sir John A. Macdonald Parkway. The sound of truck horns and fireworks could be heard even on the third night.

Ottawa Police estimates that the price-tag for policing the demonstration is over $800,000 per day.

Earlier in the day, a large crowd gathered on Parliament Hill to protest the federal government’s COVID-19 vaccine mandate over borders and other public health restrictions, but the crowd was less than yesterday.

While police have said they do not know when the protest will end, rally organizer Tamara Licht told a gathering on Parliament Hill on Sunday morning that, “We are not leaving until you and all your children are freed.” “

The Canada Unity website says it will begin hosting speaker events at Confederation Park on Monday. There are also plans for “maskless shopping,” the website says, “we need about 1,000 people.. maybe more.”

The “Freedom Convoy” protest saw thousands of truck drivers and their supporters fill Parliament Hill and streets in downtown Ottawa, condemning Prime Minister Justin Trudeau and calling for an end to restrictions in the 22-month pandemic.

Some protesters were seen carrying flags and signs with hideous images such as swastikas. Many carried or wore large flags with “F*** Trudeau” or yellow star signs.

A counter protester outside Parliament Hill held up a sign that read, “Vaccine Saves Lives.”

Rideau Center closed its doors for the day on Sunday, with LCBO closing several outlets in downtown and the Glebe neighborhood. Police had also put up barricades to block vehicles’ access to the National War Memorial after several vehicles were parked on Saturday.

In a statement Sunday afternoon, police said it was “very aware” of complaints related to parking, inaction, making noise and other inappropriate behavior.

“At this point of time, due to security concerns, the management of the protest and traffic should be given priority,” the police said.

Ottawa Police say the priorities of the rally include:

Ottawa Police have so far reported no incidents of violence or injuries during the “Freedom Convoy” demonstration in downtown Ottawa. Police told CTV News Ottawa on Sunday morning that no arrests were made either Saturday or overnight.

“Large crowds remained in the downtown core throughout the night and were actively managed by police. Officers faced several challenges with protesters, including sporadic road blockades by trucks, which officers worked to clear These high-risk situations were de-escalated and resolved. No arrests,” police later said in a news release.

Thousands of people and vehicles filled the streets of downtown Ottawa on Saturday, forcing the city of Ottawa to declare, “Roads in the downtown core are closed due to gridlock. No more room for vehicles.” Is.”

Motorists are being asked to avoid traveling in the downtown core due to the number of vehicles already in the area.

Mayor Jim Watson told CTV News on Saturday it was time for the protests to end.

“My message, again, is clear – you have been here, you have spoken, you have protested, you have disrupted a lot of communities – Byward Market, Centertown and so on in our city – it is time for you. To go back home,” Watson said on CTV news channel. “Because we have to start rebuilding our economy because COVID-19 has been devastating to a lot of small businesses.”

Ottawa is the final stop of the independence convoy, a cross-country trip to Parliament Hill to protest the COVID-19 vaccine mandate. Hundreds of convoy participants arrived on Friday, while main convoys from eastern and western Canada arrived in the city on Saturday.

As protests continued on Parliament Hill, elected officials and residents expressed dismay at the disruption to their lives in their neighborhoods around the downtown core.

Fireworks and the sound of truck horns continued from night till morning and vehicles were parked on many roads.

McKennie said on Twitter, “Centertown residents have had enough. Horn blowing all night; music; swastikas; public urination and defecation.” “I have asked @OttawaPolice to remove protesters from QED and all residential areas. Residents want peace and relief from these heinous acts.”

Count Jeff Leiper says vehicles are parked on the streets in his ward, several kilometers from Parliament Hill.

Leiper said on Twitter: “Following the arrival of a chaotic protest, I hope the security forces now have a more complete understanding of who is involved, their numbers, locations and tactics. I am trying to stop and end this demonstration.” I want to see a clear effort.”

“Everyone wants to see this end safely, but we want it to end. The events we saw yesterday illustrate the lack of moral authority on the part of participants to claim legitimate protest rights.”

Leiper says he has seen a video of a motorist on the Parkdale Avenue sidewalk and received reports of aggressive behavior in Westboro.

In a tweet Sunday afternoon, officials say police and city staff are “very aware” of complaints about parking, inaction, making noise and other inappropriate behavior.

“Due to security concerns, the management of protests and traffic should be given priority. These cases will be responded to as resources become available,” the police said.

Police and city staff are very much aware of complaints related to parking, sluggishness, noise and other inappropriate behavior. Due to safety concerns, the management of conflict and traffic must be given priority. Action will be taken on these matters as soon as resources become available.

The Champlain Bridge is open, and the lane is cut across the Macdonald–Cartier Bridge.

Police say the Chaudire Bridge is open only to health care and essential workers.

“Be prepared to show identity,” said the police. “If you’re not, don’t use the bridge.”

Many streets in downtown Ottawa are also closed to vehicles, with only one lane open to emergency vehicles.

You can see the traffic impact on:


What is Freedom Convoy?

Freedom Convoy is calling for an end to the vaccine mandate in Canada during the COVID-19 pandemic.

“on January 15th”thA small team of Alberta truck drivers, their family members and friends, came to the decision that the Canadian government has crossed a line with implementing the COVID-19 vaccine passport and vaccine mandate,” Freedom Convoy 2022 Facebook said on Wednesday. said in a statement on the page.

“To date, we now have the support of millions of Canadians across the country.”

The protests initially sparked outrage over a vaccine mandate imposed on truck drivers across the border this month, but have since drawn support from anti-vaccination mandate groups.

In a statement on Friday, organizers of Freedom Convoy urged participants to “treat all police officers with respect” and “not to make any threats”.

The Facebook post said, “If we keep calm and show love and support for each other, a lot will happen. We will eventually ask the government to reverse its policy on COVID passports and vaccine mandates as the UK recently did.” Just did it.”