Our closest, most respected and bravest friends are the people of the Caribbean 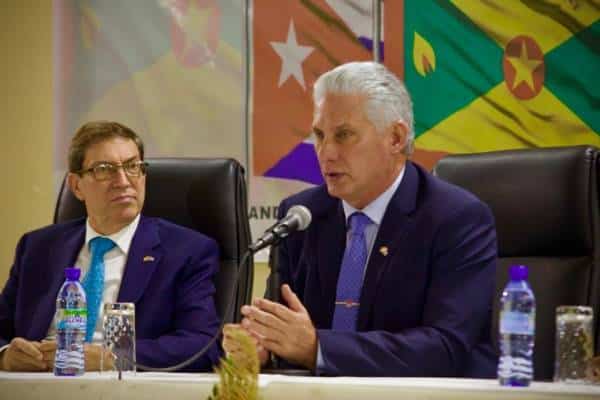 St. George.—”Our closest, most distinguished and courageous friends are the people of the Caribbean”; The President of the Republic, Miguel Díaz-Canel Bermúdez, recalled this essential phrase from Commander in Chief Fidel Castro Ruz about the close ties of the Caribbean peoples, when he summarized the meeting held this Wednesday night with members of the Cuban State Mission . Organization of solidarity in Grenada and with the Greater Antilles.

The First Secretary of the Party’s Central Committee concluded this Thursday his stay in the Eastern Caribbean, where he also made official visits to Saint Vincent and the Grenadines and Barbados, in addition, he participated in this December 6, VIII CARICOM-Summit Cuba.

Medical and construction brigades are currently co-operating in Granada. There are about fifty professionals on the Cuban side for the advancement of Grenada government programs, whom Díaz-Canel thanked for their support.

The Cuban president told them, “You are part of the creative resistance of the people you are a part of, and that has allowed us not only to protest in this period, but to move forward,” he said.

The First Secretary of the Communist Party of Cuba made these statements after mentioning the US blockade, the Covid-19 pandemic, the accumulated structural difficulties, and the problems compounded over the past three years. Even large-scale accidents, among other setbacks, such as the recent passage of Hurricane Ian through the west of the country.

The President thanked Grenada’s solidarity organizations, made up of lifelong historical friends, graduates of study centers in the Greater Antilles, and many other Grenadian men and women.

“You,” he told them, “also cherish the constructive resistance of the Cuban people, because we know that we are not alone, we have friends who are always supporting us and who have made Cuba the center of their lives.” Is. .

Members of the Cuban delegation that accompanied the President on intensive days of work in the English-speaking Caribbean, members of the Political Bureau and Minister of Foreign Affairs, Bruno Rodríguez Parrilla, and heads of science, technology and environment participated in the exchange. , Alba Rosa Pérez Montoya; Public Health, Jose Angel Portal Miranda; and Foreign Trade and Foreign Investment, Rodrigo Malmierca Diaz.

Also part of the delegation are Eduardo Martínez Díaz, President of BiocubaPharma; Deputy Foreign Minister Josefina Vidal Ferrero; and Eugenio Martinez Enrique, General Director for Latin America and the Caribbean of the Ministry of Foreign Affairs, among other personalities.

Díaz-Canel’s meeting with medical and construction brigades collaborating with the solidarity movements in Granada was facilitated by Luis E. Morajón Rodríguez, Cuba’s ambassador to that country, who introduced Terence Marchio, a well-known Cuban friend. Which made one emotional. Speeches on the historical relationship between the two peoples and governments.

Senator and a close friend of the Greater Antilles, Peter David noted the commitment of the people and government of Grenada in the fight against the blockade and all aggressions of the world hegemonic power against Liberty Island.

In summarizing the exchange, the Cuban President pointed out that his stay in the three nations he visited has been marked by three elements: Fidel’s legacy, solidarity and emotion.

We are overwhelmed by the love and recognition of our Caribbean sisters and brothers for Cuba and the Revolution. It fills us with emotion that you tell us that we can always count on you to protect Cuba; We are excited that Prime Minister Deacon Mitchell’s government has three ministers who studied university degrees in Cuba.

We are so overwhelmed that we are going to commemorate the 24 Cubans who defended the Grenada Revolution and gave their blood for it during the United States’ invasion of Grenada in 1983, in the monument here in their honor. Under his leadership Maurice Bishop.

We are excited that our delegation is also made up of a comrade who served here in 1983, defended Grenada when the Yankees invaded, was imprisoned for it, and is now here with us. (Diez was referring to Gilberto Bengochia from the Canal Translator and Interpreter Services Team—ESTI—who helps her with Spanish-English translations; at 23, Bengochia works as a translator for that brigade.) who built the airport.George International).

And we’re excited to share with you — he finally revealed to the audience —, that we’re proud of our colleagues at Granada and proud to have friends like you; Sisters and brothers like you, with whom Cuba can always count.

With no other choice, Game 6 vs. 76ers. Heat Turn for Coach Kyle in